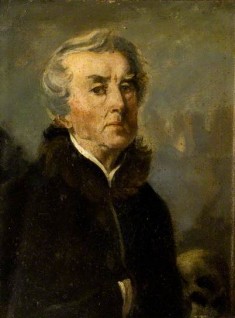 Dr Paul Barnaby from the University of Edinburgh Library wrote in regarding what (at the time) was a portrait of John Morrison by an unknown artist.

Three months or so into the discussion Osmund Bullock wrote in to clarify the execution date of the work. Andrew Greg agreed that Osmund’s argument was very persuasive and the execution date of c.1850 was added. Paul Barnaby also later consulted Trotter’s ‘East Galloway Sketches’ again and found that the self portrait of Morrison reproduced in that volume was painted ‘shortly before his death’, Morrison died in 1853 so c.1850 is feasible.

The collection were happy for the PCF to amend the details of the record but still attribute some doubt as they want to check their records again. Altogether this discussion is very convincing.

Editor’s note: this change will appear on the Your Paintings website by the end of February 2015.