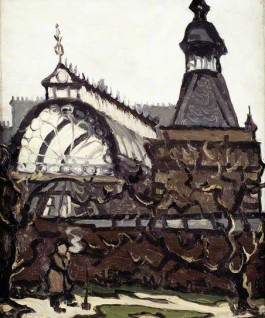 Lona Mason of The National Library of Wales and Group Leader for the Wales subject Group wrote to Art Detective to ask if anyone recognised the view depicted in Kyffin Williams’ 'Conservatory, Highgate'.

Barbara Bryant, Group Leader for British Portraits 19th C suggested two options: Athlone House or Witanhurst, both of which are on the edge of Hampstead Heath. Barbara thought Athlone House was the most likely option. Andrew Greg noted that Witanhurst does not appear to have a conservatory, thus ruling out this option. Lona found an old picture of Athlone House and noticed that the conservatory is very similar.

Editor’s note: this change will appear on the Your Paintings website by the end of February 2015.