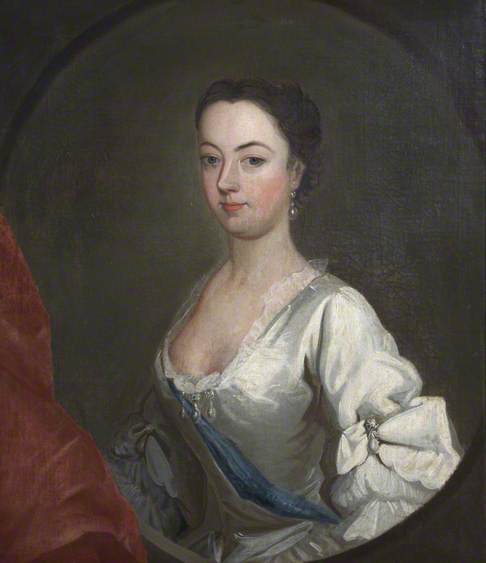 I'm hoping that someone with a knowledge of eighteenth century fashion and clothing could help in establishing a date for this portrait catalogued as 'Mary Trelawney'. It is believed to be Mary Trelawny, mother of Samuel Pollexfen Trelawny who may be the subject of 'Samuel Trelawney' also in Plymouth Museum's collection (http://www.bbc.co.uk/arts/yourpaintings/paintings/samuel-trelawney). Mary was married in 1734 and Samuel born in 1737 so one would imagine dates of circa 1734 and 1744 respectively. However the two preceding generations of Trelawnys both contain a Mary and a Samuel so it is possible that both portraits may be two or three decades earlier than suggested.

Any information on the style of Mary's gown or on Samuel's clothing would be greatly appreciated to help tie down exactly which Trelawnys these are.

This discussion is now closed. The portrait has been dated to c.1734 based on the sitter’s costume.

The style of this dress with its scoop neckline and decorative sleeves (seen in many portraits but perhaps the artist's embellishment,) the pearl drop earings and the hairstyle, do match very closely other portraits of around the same date-1734-37. I see no reason why the date of 1734 for this protrait is not correct. See attachments:
-Anne and Mary Tonson John Vanderbanke 1734
- John Gilbert and his children c 1733 Notts Archives
- Augusta , Princess of Wales, by Charles Philios c 1736. NPG2093

Dear Dave,
If you have a look through The Complete Catalogue of Allan Ramsay's Paintings by Alastair Smart (1999) you will see that the type of costume worn by Mary was in fashion from at least 1735 to 1745.
Derek

Thank you both for your help, I think that establishes that we are looking at the right generation of Trelawnys.

Lou, I'm intrigued by your suggestion that the decorative sleeves may be the artist's embellishment, do you mean to imply that it was common practice to 'bling up' provincial portraits.

Dear Dave, I am referring to the fashion of artistic licence exercised in choice and depiction of elements of 17th century fashion styles in eighteenth century portraits of both men and women. Aileen Ribeiro has famously written all about this-the style is sometimes referred to as 'Van Dyke Dress'. It was mostly in the eye of the painter but actual examples of this type of dress made up especially for use in portraits do survive in Museum collections. Please see Ribeiro's texts:

RIBEIRO, Aileen, Some Evidence of the Influence of the Dress of the seventeenth century on Costume in eighteenth-century Female portraiture', The Burlington Magazine, Vol. 119, no.897, Dec. 1977

Lou, thank you for the link, that's helped to clarify things for me.

There is another aspect of the painting that is interesting to me and that's the drapery at bottom left, which has presumably been pulled aside to reveal the sitter. I had assumed that, like the feigned oval, this was a commonly used pictorial device typical of the period. That is until I started to look for another example. So far I've drawn a blank. Can anyone recall (and perhaps link to) work/s with a similar use of this device?

I hope I'll be forgiven for resurrecting this thread but I thought it worth another try to see if I can generate some answers on the point I made in the post immediately above this one.

Has anyone come across the same or a similar use of drapery apparently pulled aside to reveal the sitter in other portraits from the same era? I have not been able to find a single example in paintings of the time. The nearest comparison I have found is in some contemporary engravings of historical subjects such as the English kings and worthies produced by George Vertue but no direct equivalent in a portrait of a contemporary commoner.

Hogarth uses it for one: http://www.bbc.co.uk/arts/yourpaintings/paintings/the-painter-and-his-pug-117666.

Though the illusion created here is different - is there any evidence that the work has been cut down?

I'd forgotten about the Hogarth, I suppose one remembers the dog first and foremost, although as you say the illusion (and perhaps the intention behind it's employment) is different in this case. And there are no obvious signs that the painting has been cut down, nor does the drapery in question appear to be a later addition, the varnish and craquelure all seem to be of a piece.

The last comments on this discussion were added three years ago. Would anyone like to contribute further?

Lou, perhaps we could close this particular discussion, having established that c.1734 looks right for the sitter's costume? It would be better to pursue the question of the artist as a new discussion.

Pollexfen--not a common name---There was a Rev J H Pollexfen who lived in Colchester in Victorian times and he was a numismatist and I came across him when I researched the Ipswich Coin Hoard of 1863. I had contact four years ago with a Carin Pollexfen who said her uncle John Pollexfen had traced the family tree back quite a way.Just a bit of something that might be of interest -- perhaps?

Marion - you write: 'perhaps we could close this particular discussion, having established that c.1734 looks right for the sitter's costume? It would be better to pursue the question of the artist as a new discussion.'

Lou, I am sorry for the long wait. Yesterday I altered the database to change your 'comment' into a 'recommendation' to speed things up.