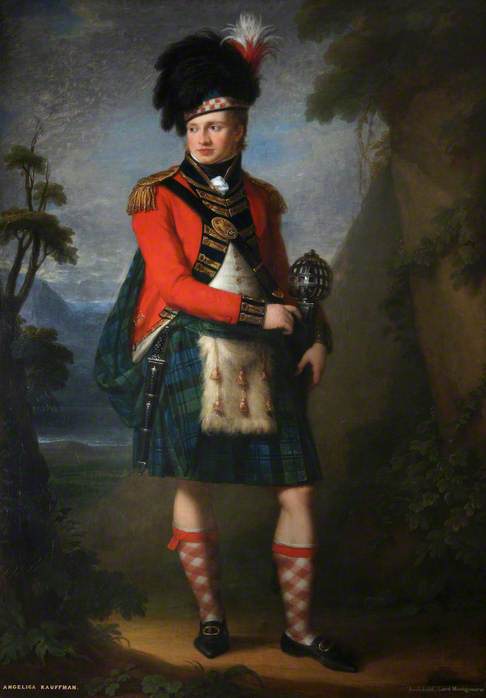 We received this comment on the painting in advance of Art Detective being established:
‘While it is possible this painting was executed in circa 1800, the uniform dates from circa 1789–90 before the 42nd were ordered to change their black sword belts to white. This was noted as having taken place by May 1790. Another, anonymous and undated officer portrait in possession of the Black Watch with similar black accoutrement shows two separate feathers one white and one red, complimenting the customary black feathers mounted. Regimental tradition only speaks of plain red feathers in this period.’

We assume this is a retrospective, as Montgomerie was not an officer in the Regiment by the time this was painted – he was on a grand tour of Europe at the time. Montgomerie was Lt in 1893 and transferred to the Coldstream Guards soon after.

Thank you to all for participating in this discussion. To those viewing this discussion for the first time, please see below for all comments. No core data need be amended.

At what date does the attribution to Kauffmann made? Has an image been shown to Angela Rosenthal [who wrote her thesis on Kauffmann's portraits] Wendy Wassyng Roworth, David Alexander, Angelica Gooden, Oscar Sandner or Giuseppe Ardolino, the current experts on her work, or to the Voralberger Museum in Bregenz? Some of her correspondence was published in 1999 and 2001.

According to 'Angelica Kauffmann, R.A., her life and her works', Manners & Williamson, 1900 - the portrait (or another the same) is recorded as being signed and dated Rome, 1800 (so comveniently painted while he was on his grand tour at Rome). See attachment, catalogue number 1922.

There is a notice in the London Gazette dated 22 Jan 1788 (attached) stating that Archibald Montgomery was made an ensign in the 42 Regiment of Foot - perhaps he later went on the grand tour before becoming a lieutenant in 1793.

Angelica Kauffmann left England in 1781 and lived in Italy for the rest of her life. There is a detailed chronology of her movements here:

I think you must mean 1793 not 1893. But the issue of Montgomerie being on the grand tour is not such a problem, as Angelica painted him in Rome. Montgomerie was travelling in Italy with Pryse Lockhart Gordon (b.1762) whose movements are set out in Ingamells's 'A Dictionary of British and Irish Travellers in Italy 1701-1800' (Yale 1997), p.409, based on Gordon's own memoir of his travels, which was published in 1830. You can read a copy of the memoir here:

"Angelica Kauffman had fine talents, but she cannot be reckoned a great artist; her productions were only pleasing and graceful. I saw her frequently at Rome in 1800, when she continued to practise her art with assiduity. She painted a portrait at full-length of Lord Montgomery in the garb of the 42nd Highlanders, in which corps he had served. It is painted with more vigour than her works generally shew, and is a faithful resemblance."

Presumably the details of the highland costume were based on the sitter's own recollection of it, which would account for the anomalies. It is a useful reminder that in real life people make all kinds of trivial mistakes to which we in hindsight often attach too much weight.

Many thanks for this additional info. The sources we have on the painting, courtesy of Helen Smailes at the National Gallery of Scotland, indicate (as mentioned above) that Kauffman met the two young Highland lairds on their Grand Tour and painted their portraits at that time.

Sadly Angela Rosenthal died a few years ago. However you should definitely contact Bettina Baumgartel who is currently working on the catalogue raisonné of Kauffman's work. I am surprised she has not already been in touch with your museum. Wendy Wassyng Rowoth is also a very well regarded Kauffman scholar.

Thanks for this advice and info.

Acquisition method
on loan from the Right Honourable the Earl of Eglinton and Winton, since 1968

Description
Of supreme importance is this full-length, Highland dress portrait of Archibald, Lord Montgomerie. Eldest son of the 12th Earl of Eglinton, Montgomerie entered the army as Ensign in the 42nd Regiment, eventually becoming a Lieutenant Colonel in the Glasgow Regiment, before its disbanding in 1795. This portrait was among the artist’s last works, reputedly commissioned by the sitter to revitalise her career after her business declined during the French occupation of Rome.