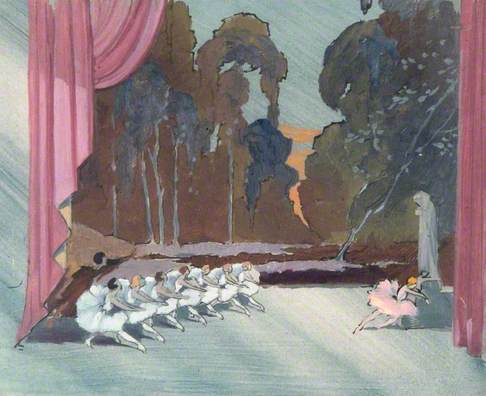 This is either a concept for the 'Stage Setting', as its current title says, or a record of something - and clearly enough a ballet - in performance, c. 1935. In either case it is for something specific, so I wonder what and (if the latter) where? 'Swan Lake' is a thought but probably wrong. The statue in a woodland setting is the only immediate clue but the stage design fairly distinctive. Carse exhibited at the RA from 1904 but was best known as an illustrator and there is no obvious evidence of him doing theatre design work himself. He lived and worked near Reading where there was a retrospective exhibition in 1939, shortly after his death. This painting was apparently purchased for the local collection either from it, or at that time, but apparently without further information about it.

The Collection has commented: 'This may well be a record of a ballet performance. We are afraid that we have no contextual material to link him to particular ballet companies or performances.'

The memorial exhibition's preview in the Reading Mercury, of Saturday 7th January 1939, mentions of Carse that "He also designed stage settings, floral designs....".

A catalogue for the exhibition was produced, written by Carse's long-time friend, Alfred Bossom, M.P., F.R.I.B.A.. If a copy still exists, perhaps in the collection of Reading Library or the archives of the Reading Guild of Artists, it might contain more information about this artwork.

My guess-and it is a big guess- would be Chopiniana (Les Sylphides) which was produced at the ROH in 1931 by the Mariinski. Those red curtains look a possibility ROH wise.

Carse was not the stage designer for the 1931 Chopiniana in London.

To me this looks more like a moment in a performance ,rather than a set design( like a downward view from a box ) . I still think it is Les Sylphides.The ROH records are a bit confusing,but the Vic Well's company did a production at Sadlers Wells Theatre in 1932, and the curtain shape would also match our painting.
http://www.rohcollections.org.uk/work.aspx?work=337
The records also suggest a Ballet Rousse production at the ROH in 1911.

I wonder if this is actually a scene from Shakespeare's 'A Winter's Tale', which in both theatrical and ballet productions traditionally has on stage a statue of Hermione before she is restored to life.

Was there a ballet version of A Winter's Tale before the Wheeldon ballet which premiered in 2014?

This artwork does not necessarily have to have been a representation of an actual production that the artist witnessed but could have been a sketch for one in the planning of which he might have been involved.

The pink tutu for the presumed prima ballerina seems odd, as does her very blonde hair and the overtly disparate hair coloring of the corps de ballet. The figure at far left is probably the villain of the piece, and yes, the statue must be significant.

If it is 'The Winter's tale', the "villain" would be Leontes. The pose is echoed in other depictions of the scene:

If this is correct, the image shows Act 5, Scene 3 where Leontes and others go with Paulina to view the statue of Hermione. As is described online: "Leontes grieves over her death, and Perdita kneels to entreat her blessing. Paulina tells the Hermione statue that the oracle has been fulfilled and instructs her to come down."