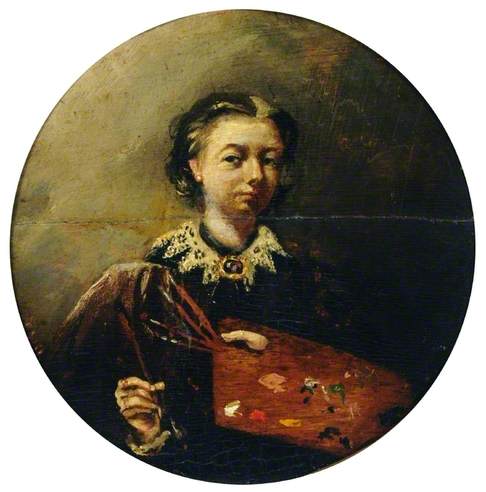 This small painting was once attributed to Rosa Bonheur (1822–1899), which was changed following research by NIRP. It bears an illegible inscription and the date 1854 – an enlarged detail might help to read it. Can anyone identify the French artist?

Museums Sheffield has provided a detail of the very faint inscription, which can be seen just above the sitter's shoulder. It is attached below.

What would also be useful from Sheffield is a view of the back of the painting, if that can be obtained. I can't quite make out the inscription on the front, nor the date, so maybe also another detail in a higher resolution photo would help (unless it's just my eyes).

A quick Google suggests that the portrait may be OF Rosa Bonheur painted by Edouard Louis Dubufe in 1857. The head looks younger in the ELD painting but the necklace is very similar. I am surprised this has not been picked up by others.

Not a necklace! A lace collar and brooch. Perfectly consistent with date of 1840s and 1850s.

This does not look like the same woman as in Edouard Dubufe's well known portrait of Rosa Bonheur with a bull [accessible on wikipedia] nor is the style much like that of Dubufe, who was an accomplished painter and capable of making a better fist at painting a hand.

The NICE entry describes the inscription (of which they say only the 1854 date is legible) as lower left (rather than centre left), and I don't think it's above the shoulder - what appears to be there in the full image disappears completely in the close-up. However, with a lot of tweaking I can make out what may be it just above the point where the sitter's arm meets the painting's LH edge. See attached.

I agree with Martin that she looks nothing whatever like Bonheur - Dubufe's portrait was probably pretty flattering, but unlike this one it is believably the same person. See attached comparison of Bonheur's face in 1857 portrait & c1863 photo, together with that of ours. I also agree that - even allowing for it being very small and sketchy - it is highly unlikely to be the work of such a proficient artist as Dubufe.

Without the Bonheur attribution, does the "French School' tag also fall away, meaning that the work could be British, of a British subject? Does the work's accession history speak to this?

The portraits of Bonheur lined up are useful. The lady in question parts her hair differently and has a weak chin, thus does not look at all like her. Interesting that the lace collar is similar. The pose is that of a self portrait. Incompetent painting anyway! It is either someone incompetently faking a Bonheur, or an unknown amateur lady artist painting a self-portrait. I think!

May I suggest that the enlargement, and unattached look, of the lady's right hand indicates a self-portrait using a convex mirror? The brown shape further up the right hand arm is unreadable - perhaps a puffed sleeve? Lace collar is not exactly the same as in the R. Bonheur pics, (well compared by Bullock) and oddly it does not appear to lie close to the flesh, as such removable/washable collars are designed to do. Bonheur adopted a rather masculine life-style and tended to eschew feminine ornament. Agreed, not a likeness of R. Bonheur and not from the hand of a talented artist. Maybe history of owner's/donor's family might reveal more?

I still think we need an image of the back of the painting to see if any labels, etc. can give an idea of the history of this picture.

We have contacted the collection about this and will relay any information we receive.

Please see an image of the back of the painting (mostly under tape) and also a close up of the signature - unfortunately this is just under the edge of the frame, but the date certainly seems to be 1854.

Ah, *that's* where the signature is - thank you, Sheffield. An object lesson in how one - or I - should stop trying to read what usually turn out to be non-existent inscriptions on low-res images. I've slightly tweaked the new close-up inscription image (see attached) - I agree that it's 1854, and like others can't make out what's before it. But assuming it's a signature, it certainly doesn't seem to be 'Bonheur' - the last two letters look like 'et'. Possibly Pousset or Dousset, something like that - but -et is a common French name-ending.

On the rear label the 'Self' has clearly been added to 'Portrait of Rosa Bonheur' later, very possibly by a different hand. Since it does have the feel of a self-portrait, the whole Rosa Bonheur idea falls to pieces (as it does anyway from the sitter's appearance). Which leaves us pretty much back where we and the collection started, and with their current description likely to be the right one

It might be worth noting that in May 1854 Bonheur took part in the fifth annual exhibition of works of art by French painters, which was held in Pall Mall. She was exhibiting pictures of cattle and sheep, which were highly praised by the reviewers from the London Daily News and other publications. Also contributing to the show was the Swiss-born painter Karl Girardet (1813 - 1871) and both artists regularly exhibited together in France in the 1840s and 1850s. It could be that this a quick and familiar portrait of Bonheur by Girardet. The number of letters in the signature do seem to correspond to the number in his surname. A large-scale example can be seen here:

Although never conclusive, the painting of her as mentioned above, by Dubufe, which dates from 1857, does show a somewhat similar dress sense, but that might have just been the fashionable attire of the time:

Bonheur had a notably square, block-like face and parted her hair on the side, neither of which is seen in this picture. She did not have patches of grey hair as seen here even as late as 1865:

It's true that Girardet was not a portrait painter or even an especially competent painter of figures, but the Dubufe portrait is far more plausibly a likeness of Bonheur than ours.

"Self-portrait (?) of a Female Painter" is a reasonable title. This is likely to be the work of a minor artist if not an amateur, and it qualifies as a miniature.

A better examination of the signature by the collection or by ArtUK might clear up the question of attribution. This might then lead to a more conclusive guess as to who might be the sitter.

I'm not sure what you mean by "better examination", Kieran. The Collection supplied a sharp-focus high-res image of virtually the whole signature over 2½ years ago now, and many of us have been puzzling over it intermittently ever since. Attached is another electronic tweaking, and it's arguably clearer for the earlier letters: flip between it and the lightened original (also attached). For what it's worth, I don't think it reads 'Girardet'...but it's not impossible if the top of the 'd' has been lost.

The trouble is that the smaller lower-case letters are at most 2 or 3 mm high, and I doubt that even an infra-red photograph would help clarify matters. It is in the nature of small signatures that they tend to be illegible.

PS The reason the thread hopped to the top is that yesterday someone posted a request for help with a privately-owned painting said to be by Bonheur; it has since been removed.

To me it looks like possibly Govinet, but it may be moot whether or not it can be read with certainty if the person was a very minor and by now quite obscure figure, let alone if s/he was an amateur.

I thought the signature read Fauquet or something similar. Louise Fauquet would fit the bill, but I can't find any examples of her work.

The signature is tiny because the work itself is a miniature, which obviously does not help.

Louise Fauquet was born Louise Saint-Edme in Milan. She married a Mr. Fauquet from whom she was widowed by 1852. A lithograph of one work, from 1833, and signed "L. St. Edme"can be seen here:

Osmund, by "better examination" I mean removing that painting from its small frame and seeing if the first letter of the signature is an F or a G or otherwise. This would allow for a consideration of the whole and not just "virtually the whole" signature.

You're right, that might well help. But with any connection to Bonheur now extremely doubtful, and the quality of the painting so poor, I wonder whether the Collection will feel it's something worth doing. You or I might be happy to de-frame a small picture we owned, and then put it back again, but their obligations will doubtless be more complex (and appropriate staff time harder to justify)...what if it came apart along that big horizontal crack?

The lithograph after Louise Fauquet / Saint-Edme (well done for finding that) suggests she was a much more competent artist than ours - as does her exhibiting of pastel portraits (one described as a miniature) at the Paris Salons of 1848 & 1852.

As one of the many gifts to Sheffield from J. G. Graves one has to assume that it is of some (albeit possibly small) value or interest. Ultimately it is for the collection to decide.

Alderman Graves was a great philanthropist in Sheffield. He gave the bulk of his collection for the opening of the Graves Art Gallery in 1933, including some 1200 paintings he had collected. In a relatively short space of time, ten years or so, from 1916 onward, he accumulated a vast amount. Many of the attributions have not stood up to the test of time. I don't know that we can make much more progress with this portrait of a woman artist, despite valient efforts on the part of the contributors. Jacinto's suggestion of the title "Self-portrait (?) of a Female Painter" is probably the best we can do, so I suggest we close the discussion.

As there is actually a signature to be properly identified, by the collection or ArtUK, would it not be better to keep the discussion open until that better examination can be undertaken?

We can keep it open, Kieran. But I am not optimistic that the collection will have the resources to do what is needed. Let's see what they say next week about further investigation into this painting/miniature.

The curator at Museums Sheffield has confirmed that they do not have the resources to investigate this further now, as the back is well sealed. Since Christopher Wright will be visiting the collection in a few weeks' time, Barbara and I think it would be worth leaving this open until after his visit.

There's a Name before the 1854. If one has the software you could make a negative of the photo and that name should pop out. Just a suggestion.

This intermittently long running discussion can be closed. Despite great efforts to read a largely illegible signature, we've come to a halt. I won't go over all the ins and outs (see above) but the question cannot be answered based on the evidence available. The portrait does not show Rosa Bonheur but who painted it remains open. As I mentioned earlier, many attributions in the Graves bequest have not stood the test of time.
Jacinto's suggestion of the title "Self-portrait (?) of a Female Painter" (1854) is probably the best way to describe this work.