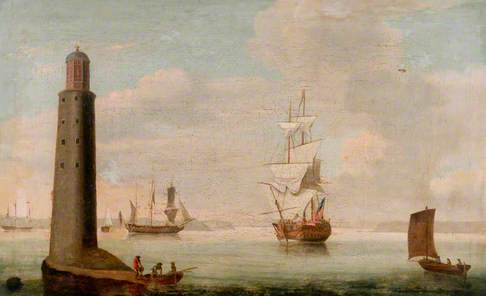 This oil painting depicts three ships near Rudyard’s Lighthouse, which was the second lighthouse built on the Eddystone Rocks near Plymouth. It is unsigned and appears to have been cut from its original canvas and glued onto another.

We have recently narrowed the date of this painting down to between 1708 and 1755, as the Eddystone Lighthouse pictured is the second lighthouse which stood between those dates. The ships are third-rate, 64-gun, ships of the line, and appear to date no earlier than the 1740s. Does anyone know of any maritime painters that could have painted this? They were likely active between 1740 and 1755.

This discussion is now closed. The ‘Two Ships with a Lighthouse’ have been identified as two Royal Navy warships off Rudyerd's Eddystone Lighthouse. The unknown artist was probably British, and the date mid-18th century.

How about Richard Vale? HIs dates aren't precisely known and incline to around 1720-30 which could still work for this. The palette and dead calm with hull reflection seems to chime nicely with others.

I have an interest in lighthouses.

This hand is a puzzle. I doesn't strike me as Richard Vale (nor Monamy as per link from Rick above): the lighthouse is probably based on Hulsbergh's print after Sailmaker and the ship at right, bow on, follows a general van de Velde model of which the 'The shot' or 'The morning gun' in the Rijksmuseum (see link below) is an archetype, though one finds variations in the 'airing sails' patterns. I agree it is likely to be mid-century, and Swaine (b. 1730) did a few similarly wide calms, though no Eddystone I can think of, but he doesn't do such spindly, top-heavy hulls (as also in the ship on the right) and is not otherwise likely. They are of course RN ships, with that on the right flying the normal common pendant at the main.

Is it at all possible that the Museum could double check their acquisition records please?

Is the acquisition correct in being "bequeathed 1925"?
Could it have been transfered from somewhere else perhaps?

Hello everyone, thank you for the suggestions! I do agree that it seems to follow the van de Velde model, but as you say, the ships don't seem quite right to make it an obvious match despite some similarities. I have found information this morning however that suggests it was done by a painter of the Dutch School if that is helpful?

I've checked our acquisition records & the catalogue entry for the painting, and I realise there's a mistake with the ArtUK date, which I apologise for. It is highly unlikely to be from the 1925 bequest.

The painting does not match to anything listed in the 1925 bequest, nor does it match anything in the large Clephan bequest of 1934 (which came from an art collector in Leicester). However, there was a second Clephan bequest in 1938 (by the sister of the original donor), which was not properly catalogued until the 1970s alongside the rest of the full painting collection. There are two paintings here listed under the same number, both listed as "Dutch School", and their titles are here:

These are definitely two separate paintings, and I've attached a copy of the one without a lighthouse here, though there is no listed reason as to why they are under the same number and I'm not sure if they're similar enough to hope they are painted by the same artist. I may remove the back of the frame later today of the one without a lighthouse in the hope of finding a signature!

These paintings, if from the 1938 bequest, were stored in a warehouse in the council until 1953 and as such, we've no real way of knowing what was transferred in or out. As far as we know, the first list made of the museum's paintings was in the 1970s, twenty years after we'd opened. The only certainty I can give is that it does not appear in any of our accession registers from 1953 onwards.

A more appropriate title would at least refine searchability: e.g. 'Two Royal Naval warships in a calm off Rudyerd's Eddystone Lighthouse' . The entrance to Plymouth Sound is shown behind, rather closer than it is (which is about 18 miles). Note that the ODNB standard spelling is 'Rudyerd', not 'Rudyard', though it is historically variable.

Pieter would certainly know better than I, but the "Dutch School" attribution may be based on the "air" of van de Velde, which obviously does not preclude a British painter.

Correct: I think the Eddystone picture is British school (probably English) with 'Dutch debts': the other now produced has even greater Dutch debts in terms of subject but whether Dutch or English in terms of hand is really very hard to be sure, though I suppose the former is more likely from its general content: but it is (as they say) a real 'dog', albeit a rather fascinating one in its details. Its a capriccio Mediterranean habour scene and the 'staffage' in the lower parts -elegant figures on horseback and busy quay activities - are quite good albeit rather rough. The ships at right and in the distance are obviously Dutch in flags and form, one with a Dutch lion on the stern, though its not usually standing on the circlet implied below: if red on gold it would be a Holland lion or the United Provinces (if with a spear raised in the right paw and a sheaf of 7 arrows in the left) but the only otherwise plain white lion I can see in the arms in Michael Robinson's appendix of them to his NMM/ van de Velde drawings catalogue (vol 1), apparently on blue, is the town of Leeuwarden, and the shield of that is crowned. I doubt its meant to be that specific. Red 'ragged' saltire crosses would normally indicate Burgundian/ Spanish Netherlands -but never flying with Dutch (Protestant) tricolours, and here they are not 'ragged' but St Patrick form, as now associated with Ireland and Jersey, but clearly neither applicable in this case.

Various people do fairly fantastic coastal landscapes, though not quite as fantastic as this: Beerstraten for example and sometimes Minderhout, as respectively here:

The colour of the former and figures of the latter have some parallels in the Preston Park image, but its not in the same league quality-wise. The shipping is also technically very poor though the two ships on the right, especially that far right, are Dutch flute form in the stern which is one reason for suspecting that's the point of origin.

Despite being pretty coarse it has drama in the setting and cleaning might produce a pleasant surprise, if only to decorate a wall in some space needing livening up. It's not by the 'Eddystone' painter of course.

Hello all, thank you for the comments and suggestions, particularly with regard to the second painting - we'll update our record with the information on the ships, as well as the fact that the paintings are not a pair by the same painter and that the Eddystone one is more akin to the English school rather than Dutch. We'll also change the title to refine searchability.

Thanks everyone for your help so far, it seems as though the mystery painter may remain just that!

Thanks: a better title, on the lines suggested, and 'British School, mid-18th century' may be as close as one can reasonably get. I certainly don't want to cut this off prematurely but, on the one hand, doubt the artist will be better identifiable and, on the other, would rather it does not add to our tally of long but inconclusive/ unevidenced speculations.

This short discussion took place over a few days in December 2019, with no additions since. It did not reach a definite conclusion on artist other than probably British but did elucidate details of the subject (inc. source of the lighthouse image), and those of another and very different marine painting at Preston Park that is, rightly or wrongly, associated with it in provenance records there. I then suggested a better title would be 'Two Royal Naval warships in a calm off Rudyerd's Eddystone Lighthouse' and that for the moment 'British School, mid-18th century' is as close as we can get for hand.

The collection has already expressed willingness to change the title and agreed that is the best we could then achieve, so so unless anyone has strong recent views otherwise I suggest we leave it there for the time being.

Pieter, thank you for your summary. This long-dormant discussion will close after one week (by 5th March), unless significant new information about the artist emerges in the meantime.

Description
The painting depicts the Rudyerd's Lighthouse at Eddystone Rocks, with three figures in a rowing boat at the base. In the background are three gunships, tentatively identified as third-rate, 64-gun, ships of the line. Two ships are flying what appears to be the British Red Ensign flag, and the flags of the top appear to be Saint George's Cross.