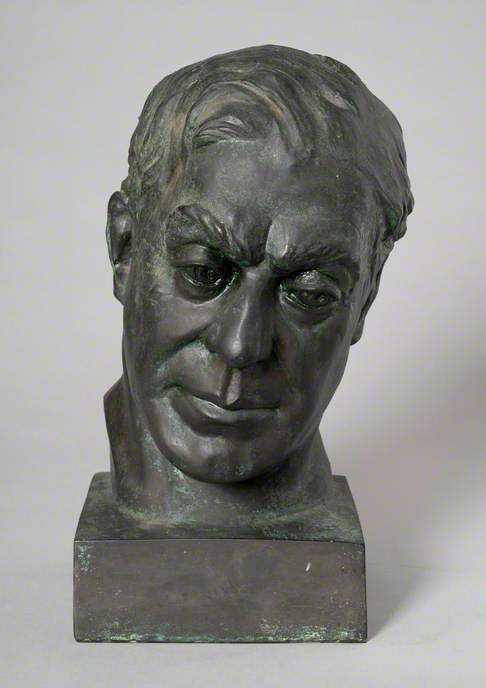 This bust is signed on the verso, but can anyone identify and tell us more about the sculptor from it?

The signature appears to be Willie or perhaps Wissie.

Could the signature be Winsten? ie Clare Winsten. The work doesn't look in her style, though.

How about the work of Samuel William Ward Willis?

The signature is different from that on our bust:

Yes, I realise that. I’ve compared a number of them, but keeping an open mind. Due to the to awkwardness of the placement of the signature, I wondered whether it may not be standard signature for most sculptors. It can be a little difficult at times signing an piece of work in a tricky place, in mid air, with no support.

I'm far from certain, but I think the last two 'letters' in the signature/inscription may be the number '36'...and actually the two before could be '19', though that's less likely. Thus the whole thing could read either 'W١S 36' or even 'W 1936'. See attached.

As I was following up with the Collection with a couple of submissions, I have asked, following Osmund's comment back in February that this might be a 1936 date here, if they have any information about when this bronze was gifted to the Raymond Mander and Joe Mitchenson Theatre Collection. I have also enquired if they know of any particular roles Anderson played from 1936 or just before. I note from the actor's Wikipedia page that he founded the Indian National Theatre in 1932 and toured extensively abroad for a decade before the war.

An online image led me to a work by the British sculptor Charles Thomas Wheeler (1892 - 1974) in the Collection of the Royal Museums Greenwich. Here is the work:
“Admiral of the Fleet Sir Philip Louis Vian (1894-1968)”
https://tinyurl.com/y5rvskx6

Art UK notes the following:
“From 1956 to 1966 Wheeler was president of the Royal Academy in which capacity he is best remembered for the controversial sale of Leonardo da Vinci's cartoon of The Virgin and Child with St Anne and St John the Baptist. His autobiography, High Relief, appeared in 1968.”

Thanks to Osmund for his images. I believe that the signature is likely his second option, ‘W 1936’. I compared the signature with the one in image 8 of “Frederick Charles Richards (1878–1932)” (https://tinyurl.com/nzfwxrwr), a work from 1926. A composite is attached. Although the works were executed one decade apart, note the similarity of the ‘W’ and the ‘6’.

Perhaps the best way of revealing the artist's name would be for the collection to make a brass-rubbing-style impression from the signature area.

As seen in other images in this entry, the back of the head is absent, as if it had broken off or was never sculpted to be cast. Is that normal or significant?

The Wheeler sculpture “Frederick Charles Richards (1878-1932)” that I mentioned above also has no back to the head. https://tinyurl.com/nzfwxrwr

James Grant Anderson's wikipedia entry states that "From 1929 through 1939, Anderson toured with his company through India, Burma, Ceylon, China, Japan, Kashmir, Afghanistan, Java, and Sumatra. In 1932, he founded the Indian National Theatre in Bombay, in which English and Indian classics would be presented by all-Indian casts. While in Burma and what was then known as Siam, Anderson appeared as a clown in Hagenbeck's Circus."

The attached newspaper extract, from the The Stage, Thursday 3rd September 1936, shows that, prior to that year, the actor had been away for almost all of the past seven years, and had only recently returned to the UK. Osmund's suggestion could well be correct, that, as Anderson was back at home then, the signature shows the year 1936.

The attached composite, featuring a news piece from the Aberdeen Press and Journal, of Thursday 20th February 1936, shows what Anderson looked like in that year.

James Grant Anderson was born on the 20th April 1897, in Glenlivet, Ballindalloch, Banffshire, Scotland and died on the 1st October 1985 at the professional actors' retirement home of Denville Hall, 62, Duck's Hill Road, Northwood, London, England, leaving an estate worth £40,000:

The 1936 newspaper photo looks younger than image #7 in the Art UK entry, which is the closest equivalent in terms of angle of view. However, that photo (which looks like a publicity shot) may have been taken earlier than 1936 and simply provided by Anderson to the paper. Also, in 1962 he would have been in his mid 60s.

That was another late-night-posting lapse of concentration! The photo could date anywhere from 1950 to 1965.

In 1936, Anderson would have been 39. He looks much younger than that in the Aberdeen Press & Journal photograph, so it is most likely a shot taken at a somewhat earlier age.

I have made the Collection aware of the later submissions that suggest the work might date from 1936, and followed up on my original enquiry in terms of when it was gifted to the Raymond Mander and Joe Mitchenson Theatre Collection.