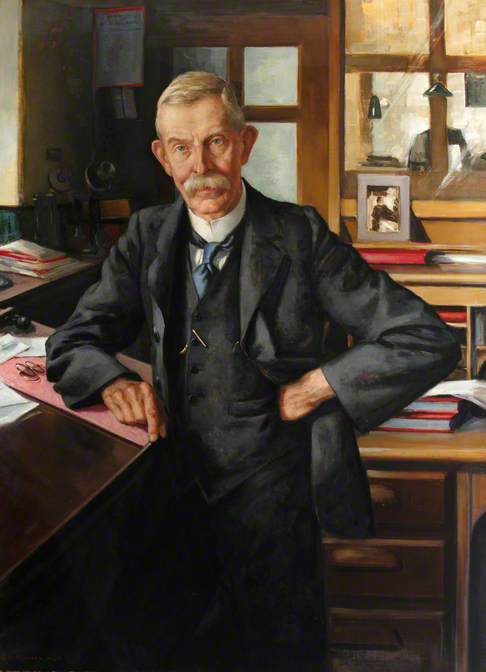 Can anyone identify the date or subject of this portrait?

It was previously stored in a Manchester Evening News and Manchester Guardian store in Salford and is presumed to show someone connected with the newspapers.

This sitter of this portrait has been identified as Thomas William Evans (1853–1939), General Manager of the Manchester Evening News (1901–1929). The painting's title has been updated accordingly on Art UK.

I think it's Thomas W. Evans, general manager of the Manchester Evening News. Mooney painted his portrait in 1929 on his retirement.

'After almost sixty years' service with the Manchester Evening News, Mr Thomas W. Evans has retired from the position of General Manager. Mr Evans joined the paper as a youth within two years of its birth and much of its present prosperity and reputation is due to his able and energetic management, which extended over almost the whole history of the paper. Mr. Evans's long connexion will be commemorated by a portrait painted by Mr. E. Hartley Mooney, which will hang in the office. A replica has been presented by the proprietors to Mr. Evans...'

We don't have any records in the archive that would confirm it but that seems pretty convincing to me, and would explain why Scott family members and Guardian staff were unable to identify him. I have updated our catalogue.

Great stuff, Tim - having drawn a blank on the BNA (despite it including the Manchester Ev. News), I feared we'd have to look at all his exhibiting (at Manchester, Liverpool & the Royal Cambrian) for even a *hope* of identifying him. I was also going to suggest the Guardian might like to give us free access to their online archive for a week or two - strictly for researching this, of course - but I'm afraid your brilliant Google Books searching has blown that one!

A bit of biographical on the sitter (if the Collection don't have it): Thomas William Evans, born Manchester [late]1853, son of a printer. Died January 1939, again in Manchester (where seems to have lived all his life). In 1870 started at the Man. Ev. News aged 17, as a 'Collector' (1871 Census) - presumably of money, as in 1881/91 he is a Cashier. By 1901 he had been promoted to 'Manager Newspaper Office', and so remained until his retirement in 1929 aged 75 or 76. His second son Charles followed him into the newspaper business as a printer; his youngest, Henry, was killed on the Somme with the Manchester Regt in Oct 1916.

Ah, there WAS a piece about him in the Manchester Ev. News after all, but I was looking too early - it was not until his death in 1939, when they gave him an extensive obituary, illustrated with a photo of the portrait. See attached.

Lots more information there: his father was also in the Manchester newspaper business, and his uncle was closely associated with the paper's beginnings in 1868. They also say that he "left behind him a memory and a tradition that will not be lightly forgotten", and that the portrait "has an honoured place in the Company's offices today". O quam cito transit gloria mundi...

Still, it's good to resurrect such a remarkable chap - I do hope he doesn't just go back into store.

I see (from an indirect email source) that Art UK has just put out a press release about Art Detective's score of 100 discoveries since it started three years ago. Perhaps the paper could make a short piece of this one too, not least to see if the Evans family version of the portrait is locatable - possibly still with them -since according to the cutting above that was the original and this a replica.

Thanks Osmund - we've used that information to create an authority file for TW Evans.

As a staunch Guardian reader I'm pleased to see this - and resolved so quickly - but also puzzled. I thought ArtUK only dealt with paintings in public collections, which surely doesn't include The Guardian. I wanted to ask about a painting held in the Durham Miners' Association collection but wasn't allowed to!

Judith, the original core venues were certainly public collections, but I think this may be relaxing slightly - there are many Oxbridge colleges, for example, now included. Art UK will doubtless tell you more - I'd be grateful if they could explain it to us, too, for I'm as confused as you are! - but it may possibly connected with what are called 'partner collections', who pay on a sliding scale to be associated; the cost seems very low if they have relatively few paintings. See https://static.artuk.org/_file/Art UK Partner Brochure 2017.pdf

Anyway, however it works, the collection of the Durham Miners' Assn is not currently on Art UK, and sadly we can't discuss any painting unless it is. I'm not sure how interested DMA would be anyway - I can't see any mention (let alone images) of a collection on their website.

Guardian, while we're at it there's another one in your collection for which I can provide an artist's name.

See https://artuk.org/discover/artworks/agnes-headlam-morley-223594 for a comparable portrait of 1964 with an identical signature/date format.

Judith, in answer to your question above – generally, yes, Art UK’s remit is to cover art in the UK’s public collections. However, we do feature some private collections, such as the Oxford and Cambridge colleges. Not very many private collections have been included so far, and these decisions are made on a case-by-case basis.

Also, a word on partner collections. Art UK Founder Partners and Art UK Partners are the core body of UK art collections, without whose commitment Art UK would not be possible. You find more information and see the full list of partners here: https://artuk.org/support/introduction. The Guardian News & Media Archive is not an Art UK partner.

Osmund, if you have information about another painting in this collection, could I ask you to submit this information in a separate discussion, please? Here's the relevant link: http://bit.ly/2f7KgJQ

Thank you Osmond and Edward.
I wonder if (a) The Guardian might become a member of UK Art if it has a significant collection - many readers would surely approve; and (b) the Durham Miners' Association, and possibly similar associations elsewhere, might be invited to become members. The Pitmen Painters has obviously had major coverage, although I don't know where most of the works are held. The painting I saw that was unattributed was displayed at Auckland Castle (which contains the 12 celebrated Zurbarans bought for public accessibility, along with the castle itself, by Jonathan Ruffer) at a fascinating exhibition last year, which is reviewed here, with the picture itself at the end:
http://www.chroniclelive.co.uk/whats-on/arts-culture-news/miners-bishops-durham-ups-downs-11410427

Thanks, Judith. In order to keep the discussion on topic, could I ask you to send any further comments that aren't directly related to this portrait to artdetective@artuk.org? We'd be very pleased to receive them.

Time to congratulate everyone and close this satisfactorily and comparatively easily solved case. It is a good period piece and full of fascinating detail.