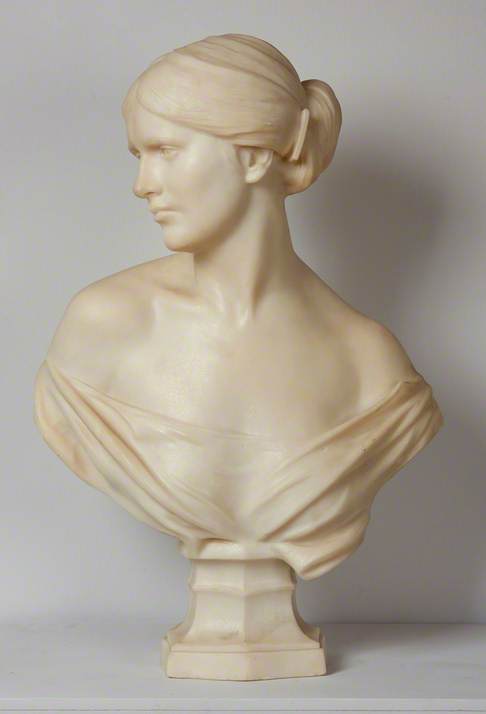 This marble bust by James Pittendrigh MacGillivray is currently on display in the exhibition 'National Treasure: The Scottish Modern Arts Association'. However, we've been unable to identify the sitter; the work is simply titled 'Fiona'. The bust is dated 1916. In terms of provenance, it was purchased by the Scottish Modern Arts Association (SMAA) in 1921 from the Royal Scottish Academy (presumably from the RSA annual exhibition), and was illustrated in the SMAA's 1922 Annual Report (see photo attached). It remained in the SMAA collection until 1964 when the majority of that collection was transferred to the City of Edinburgh. [Group leader: Katharine Eustace]

A 1915 work by this sculptor may have used the same model:

His NGS record (https://bit.ly/3AP94k6) remarks that “after the death of his wife in 1910 and his daughter in 1917 he focussed increasingly on poetry and photography”, so the lack of exhibitions is unsurprising and some of his work done (or at least exhibited) in those years seems to be female busts like this one.

I wondered if this might be a portrait of the daughter who died, though she was called Ina, not Fiona (https://bit.ly/3wrP6cf) but there are busts called Ehrna, his other daughter under her own name.

Here is an article from April 1921 that discusses this work at the RSA Exhibition.

"Fiona" may may simply be a model, or even a type.

Thanks Marcie. I was relying on the Mapping Sculpture entry for the RSA that year (https://bit.ly/3AMUSaZ) which doesn’t mention it, but it may be that certain pieces added late or shown separately in some way.

What did strike me about your Scotsman quote was the reviewer saying that Fiona was “perhaps the most … personal” work there. It might be a generalised compliment, but you wonder if there was a story there which they would have expected at least some of their readers to know.

Like Jacinto, I also wondered if the name 'Fiona' is just a generic 'mythological' name, perhaps the figure from James Macpherson's poems (the poet who forged/wrote the Ossian poems, but he did invent the name Fiona... https://en.wikipedia.org/wiki/James_Macpherson)

The sculptor also did busts of other 'Celtic' names like 'Celtica', 'Tanue/Teneu/Thenew' (St Kentigern's mother) and other figues from myth or history, like 'Ianthe' (and maybe his 'Priscilla'). https://artuk.org/discover/artworks/search/actor:macgillivray-james-pittendrigh-18561938/sort_by/name.keyword/order/asc/page/1/view_as/grid

‘Fiona' seems to match quite closely a woman known as “Highland Mary” who is shown on one of the pedestals of MacGillivray’s Robert Burns statue in Irvine, Scotland.
https://tinyurl.com/3hnj9na5

The work in Irvine was unveiled in 1896.
https://irvineburnsclub.org/statue.php

I remain of the opinion that this is more likely to be a type than a portrait of an actual woman, though it could be based on a model.

The reviewer's comment quoted above to the effect that this was a "personal" work may have been based on an unfounded assumption that it depicted a woman close to the artist, as opposed to a professional model or an idealised type.