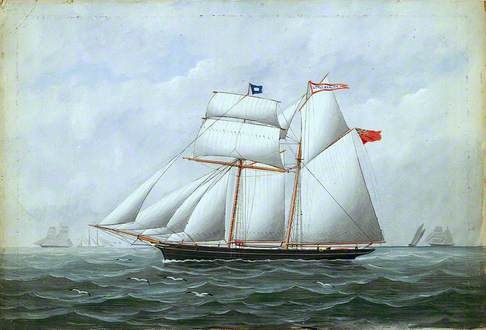 An enquirer for information on him has now produced a watercolour signed and dated 1903 of the fast Plymouth cutter 'Vanduara' (PH119, built 1880) shown when later rigged as a ketch, which has extended Pearn's working span: see attachment. The unidentified lighthouse is perhaps at the end of Plymouth Breakwater, but, even if not, the fact 'Vanduara' was a local vessel suggests Pearn might also have been Plymouth-based. Can anything else be added, including other examples outside the range 1875–1903?

This discussion is now closed. A request for further information on ‘W. Pearn (active c.1875–1903)’ has identified him as William Pearn (1855–1926), a former house painter (journeyman). A biography of the artist has been produced for Art UK. The acquisition details have been updated for this and the other ship portraits by Pearn in the same collection.

MutualArt lists two works sold at auction [1], one of which is also local to Plymouth.

MutualArt names him as "William Pearn", as does ArtNet [1] which also lists four works, including another related to Plymouth, "The Ketch 'Wild Rose' of Plymouth , 1905".

Skinner also has him as William [2], as do LotSerch [3] which lists an 1886 work, "Ships moored in Sutton Harbour, Plymouth including a Guernsey steamship" (buried in a long page).

"William Pearn was a man born in 1856 in Lanteglos Cornwall Plymouth [sic]. During the 1881 UK Census he was 25 years old and lived in Devonshire. He appears as the head of his house in the 1881 UK Census." His address is listed as 31, Clarence St. Plymouth; occupation: painter. [1]

There's a William Pearn, who was born in Lanteglos-by-Fowey, Cornwall in 1855, but was living in Plymouth from at least 1881. He was listed as a painter in 1881, a decorator in 1891 but a signwriter in 1901 and 1911. It's not unusual for signwriters to be artists but obviously not conclusive.


"Opposed to the funky Narcissus is a sailboat starring in ''America's Cup'' by William Pearn. Mr. Pearn's array of sails has the natural elegance of a nautilus shell."


also, some works are on Wikimedia Commons [2]

Eldreds had "Westcountry artist William Pearn's painting of 'Telephone' A two masted vessel passing the Eddystone is up for auction in our 28 Nov #FineArt and #Antiques sale. Both lighthouses can be seen in the background" [1]

Just for the record (in case the pictures were inherited through a family connection with Pearn), I suspect the gifter of the paintings may have more correctly been Commander Henry Oliver Hill, who worked for the museum and apparently gifted many items.

Hello Roderick (Dundee?): I didn't specifically check it was H.O. Hill, of nautical-photo-fame, just took it verbatim the system, but will do and expect you are right.

Thanks to Andy for the other bits: death date and any local obit refs would be useful if detectable, beyond which I don't think he need long detain us. It looks like there's quite a lot still out there, which is hardly surprising.

(Not Dundee. Skye, then Kent - where I unashamedly plagiarised your work on Chatham Historic Dockyard, first for KCC and then the Dockyard Trust. Overdue apologies.)

There's no reference to a William Pearn who might be an artist in any South-West newspaper on the British Newspaper Website between 1875 and 1930.

Tony, I don't think any of your findmypast links work unless you are a logged-in subscriber to FMP. I can see them because I am, but I fear most people here cannot. For any pay websites you normally have to save the pages or document images, and post them as attachments.

Thank you Tony: nice to see you here and sorry I missed your earlier note but Osmund is right: it is often easier just to post the exact information/ dates and the source (such as b. /m. / or d. parish) unless one needs to see the original to extract long text or decipher unclear MS entries.

Summary attached and I'll recommend winding up if nothing more appears in the next day or so.

I have some pretty interesting info about William Pearn's thoroughly seafaring family, Pieter. It will be quicker to summarize than what you still await from me about Jansen - will you forgive me if I divert my attention briefly?

William Pearn was actually born and raised in Polruan, on the SE bank of the Fowey estuary - it is in the parish of Lanteglos-by-Fowey, and a mile or so from its fine mediaeval church of St Wyllow. William was baptised there, like all his numerous clan - it sits on a hillside less than half a mile from Lantic Bay on the south coast, and its burial records are full of unidentified men and women whose bodies were washed up on the beach below. Daphne du Maurier was married at St Wyllow.

Polruan was thick with mariners, and the Pearn family (who had been there since at least the C17th) were no exception: William's father William Dickenson Pearn (1829-1866) was the mate of the 'Charlotte Ann' of Fowey - he went to sea at the age of 12 (see his 1851 mate's certificate attached) - and *his* father Robert (1802-1893), who lived next door in Fore St, was owner and master of the same vessel**. Robert Pearn's father, George (1775-1869) - i.e. our William's gt-grandfather - was *also* a mariner. At least four of William Junr's uncles (WDP's younger brothers), too, were seamen, and his maternal grandfather Henry Carne was a coastguard. I could go back further on the same theme, as I can sideways with cousins, but that's enough family connections with the sea pro tem.

I'm posting quite a few attachments, as I think some are rather interesting documents.

**The 'Charlotte Ann' was a 52 ton sloop (also described elsewhere as a smack) built at Polruan in 1834/5; it was mainly employed in the coasting trade. See https://bit.ly/3mNkquX , and Robert's 1850 master's certificate & 1871 Census record on board the ship (both attached).

The probable reason for our William and his two younger brothers discontinuing the family seafaring tradition is a sad one. In January 1866, when William was 10, their father William Senr (the 'Dickenson' is usually omitted) was at sea as mate of the 'Charlotte Ann', when he was washed overboard and drowned. See attached newspaper story. The body must have been lost, as there is no burial record for him at St Wyllow - nor indeed any national death record, even for those who died at sea. In January 1880 William Junr married Ellen Herbert at Devonport (his wife's home town), and her father, too, was a mariner. As in the census of the following year, William is recorded as a painter. William & Ellen moved to, or were already living in Plymouth, and there they stayed; none of their five sons went to sea. William's brothers, Robert and Albert, remained with their widowed mother in Polruan, but stayed on shore and became shipwrights - she meanwhile opened a grocery shop.

It is highly likely the 1926 death in Plymouth is our William Pearn, though I can find no supporting evidence to confirm it. A death certificate would settle it, as his widow was still living at the same address shown in their 1911 Census record, 5 Boon's Place, when she was killed in a motor accident in June 1931. See attached. Another report of the inquest describes her as a widow, and the man who identified her body, Albert Henry Pearn, was the fourth of William & Ellen's sons.

Pieter/Osmund - point taken about links and attachments but seems like all the relevant information (and more) is available now. I'm happy to follow up the death certificate if that helps.

I am also happy to take one for the team** if Pieter would like the confirmation. Would you, Pieter? There are a couple of other possibles in Cornwall, to which he might theoretically have returned - but now we know that in 1931 Ellen was a widow still living in Plymouth at their 1911 address, I don't think there's much doubt the 1926 death in the same place is him.

[**It would be available as a PDF, which is £7 rather than £11 for a paper certificate. Tony, do you have a GRO account set up? If not, I already do and it would be quick and simple for me to do it.]

Thanks to both for the offer. While always happy to have precision, I don't want to encourage anyone to spend money they won't get back, and -if so inclined none the less - the least possible. If it stays 'second quarter of 1926' in this case, that's fine.

All my biographical summaries are literally that: putting what is provided into ordered, ready-reference form. What isn't provided doesn't get in, apart from any minor detail I chase in doing it (so far at no cost).

With thanks to all those who have turned practically nothing into something, I think we can probably wind this one up unless either Osmund or Tony signal an express intention to chase up Pearn's exact 1926 death date, or equally expressly not to do so - either here or by private e-mail to Art UK.

Depending on that being done or not, perhaps Marion would kindly judge when to close it: i.e. either wait till the date appears here, or do so as convenient, assuming no-one has anything else to add.

Pieter, your new version is so good (when are they not?), I think it deserves a specific and certain date of death. I will apply for the death certificate PDF immediately after this.

Thanks for the generosity, on both counts: winding up can wait till you report back. I must ask the William Pearn I think I still have an email for, former art specialist at Lawrence's of Crewkerne (auctioneers) in Somerset, if he knows any link with this namesake: stranger things have happened...

Excellent summary Pieter and I think worth getting specific details of death.

The PDF has arrived, and it is indeed the right man. William Pearn died at 5 Boons [sic] Place on 23 May 1926. His profession is given as "Formerly a House Painter (Journeyman)". Image attached.

Thank you for generously obtaining that Osmund, and my apologies for so long failing to notice you had posted it. It makes a neat conclusion to the matter, which I think we can now wrap-up. Many thanks to all the other contributors as well. An updated biography is attached below.

Description
A primitive ship’s portrait showing the two-masted schooner ‘Little Beauty’ broadside-on under sail. Her name is visible from the flag flying from her main mast. Several figures are indicated on board and a variety of other vessels can be seen in the distance. The artist painted a number of ship’s portraits towards the end of the nineteenth century. The painting is signed ‘W.P.’, bottom right and was painted in 1875.