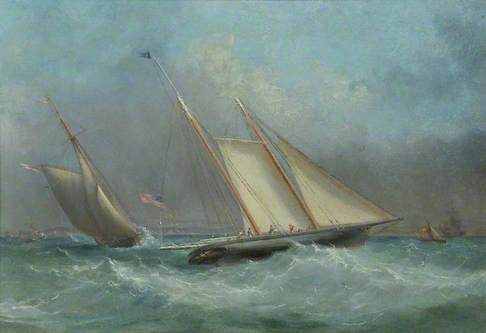 I think the artist is Henry Sargeant (fl. 1830-1850), see https://bit.ly/3Hfeshk. The picture here attached (Off the coast, Portsmouth, 1883) is very evidently by the same hand. Some dealers have confused him with Henry Sargent (1770–1845) https://bit.ly/3n9dTxB who is earlier and different. [assigned discussion leader: Pieter van der Merwe]

Pieter van der Merwe has commented: ‘It is clearly not the 1770-1845 man, but if the 'Off the coast, Portsmouth, 1883' is the same hand then his span was longer than the c. 1830/1-1850/1: it seems hard to believe simply on a working longevity of at least 52 years but it's at least possible. All Teddy Archibald noted is that he worked in Portsmouth in the middle of the 19th c. and the event shown in the NMM picture is the 'America' beating the Marquess of Anglesey's yacht 'Pearl' in 1851.'

An article in the ‘Portsmouth Times and Naval Gazette’ of October 19, 1861, reports on the fine art and industrial exhibition at the Queen’s Rooms, Portsea, that was a result of the success of the previous year’s exhibition. “Captain Parnell exhibits a very nice picture by Mr. Sargeant, a local artist of some repute, illustrative of a yacht race.” See attachment.

A record in the 1861 England Census, attached, shows a Henry Sargeant and family in Portsmouth. He is a “painter employing 3 men 1 boy”. A possible death record for a Henry Sargeant is attached. It shows that he passed away at Portsea Island, Hampshire, in September 1868 at 71 years of age.

Thanks Marcie: that's an advance on where we were, not least (since employing three men) that he was probably mainly a housepainter.

The RYS don't seem to think that the Pearl raced the America in 1851, and the Pearl was in any case over 30 years old by then. If this is an imagined scene between two famous yachts of different eras from England and America then the putative date of 1851 is an earliest date possible but there is no end date to help.

One of the six works at the first link supplied by Jim Boyd is an engraving https://tinyurl.com/bzpdhauj from 1836. The details indicate that it was: “Painted by H. Sargeant, marine painter to HRH Duchess of Kent” and “Pub’d by J. Miller, High Street, Portsmouth”.

The 1839 Robson’s Directory for Portsmouth shows both men: “Henry Sargeant” at 85 Broad Street is listed as “Marine Painter and Glazier” and “John Miller” at 102 High Street is listed as “Printer, Bookseller, Stationer, and Public Library”. According to Google, Sargeant’s residence is a seven-minute walk from Miller’s residence. I have attached both pages from the Directory. The Directory also shows that the printer of the engraving, W.H. Charpentier, lived at 50 High Street, Portsmouth.

The 1841 England Census (attached, search for “Henry Saycan”) shows Henry Sargeant (“Painter”), his wife Sarah, their children, another woman named Sarah (possibly Henry’s sister), and one domestic servant living at a residence on Broad Street, Portsmouth. Since the record is difficult to read, I checked the 1839 Robson’s Directory for some of his neighbours on Broad Street and found them listed there.

The Wikimedia Commons link gives the vital dates of 1798-1868, which may well be correct. The 1883 picture linked above need not be by the same hand, though I can see why one might think so.

The painting is apparently a visual reproduction of a paragraph in Lawson's History of the America's Cup (p34): 'The old Marquis of Anglesey went out with his yacht, the Pearl (one of the best sailers of the squadron), taking with him Mr Steers, one of America's crew, the brother of Mr George Steers, the builder, to sail about the harbour, The America went after her under a mainsail and jib only. and passed her without difficulty. The Master of the Pearl said "Your lordship knows that no vessel with sails alone could do that"', a comment that later led the Marquis, when he visited the America, to lean so far over the stern 'that the Commodore took hold of his leg to prevent him from going over – he was looking most eagerly for the propeller.' So if Sargeant did paint the scene he must have done so in 1851 or soon after and either witnessed the event or read about it in the contemporary press as Lawson's book was not published until 1902. I am also rather surprised by the comment of the RYS as in those days a fast yacht could remain so for years. For example, another RYS yacht, Arrow, which was built in 1821, was still racing in the 1870s.

Thanks, Ian. I'll check the paper record to see if the picture arrived with its present title, which would be the obvious basis for misunderstanding of subject.

An article in ‘The Morning Advertiser’ of Friday, August 15, 1851, mentions both the ‘Pearl’ and the yacht ‘America’ at the end of a report on the Royal Victoria Yacht Club Regatta race of Wednesday, August 13, 1851. I realize that the article is difficult to read, therefore I have also attached an extract.

Accepting that a Henry Sargeant, Portsmouth marine painter and glazier/decorator's dates are c.1798-1868, what is the authority for 'Off the Coast' (see link at top) showing a late 19th-century steamer and said to be dated 1883 being by another Henry Sargeant (or Sergeant)? The link does not show it.

If it is, and given the hand of the 'Pearl/America' picture is very similar, that too might be by the same man, not the earlier one, after the story recounted in Lawson's 'History of the America's Cup' (1902) became better known. In other words we really need to be sure whether or not there were two men of the same name but succeeding generations painting roughly the same way.

Here is Sargeant (attached) based on what we have. We can leave this open a little longer for further thoughts century but note that the NMM entry has been updated from information supplied in this discussion - for which many thanks - though with a few proofing tweaks still to do.

Apologies for the random 'century': where that came from I have no idea...

That is a very good write-up, Pieter. Here are some additional details that are supported by the attachments.

His wife Sarah passed away on October 25, 1867 (‘Hampshire Telegraph and Sussex Chronicle’ of October 30, 1867). I believe her maiden name was Elcock and that they were married on September 22, 1817 (Ancestry).

The notice of his death (‘Hampshire Telegraph and Sussex Chronicle’ of August 15, 1868) indicates that he passed away on August 13, 1868 “in the 72nd year of his age”. I have attached a record that shows a Henry Sargeant was baptised in Botley on November 26, 1797 (Ancestry).

To dispel the gloom of my last comment, here’s a blurry article from the ‘Hampshire Independent, Isle of Wight and South of England Advertiser’ of March 5, 1842, about the visit of Her Majesty and Prince Albert to Portsmouth. The article starts at the head of the third column of the full page, attached. In column four, Sargeant’s “beautiful transparency of the stern of her Majesty’s ship Queen”, at a location on Broad Street, is mentioned (extract attached).

In the middle of the fifth column is mention of Her Majesty staying at Norris Castle with HRH the Duchess of Kent in 1831 - she hoped to meet some of the men who had worked on the Royal barge all those years ago. The Historic England website indicates that “Norris Castle hosted numerous royal visits during the C19. The Prince Regent visited in 1819 and Princess, later Queen, Victoria stayed at the Castle with her mother, the Duchess of Kent, in 1831 and again in 1833.” https://tinyurl.com/v4n6p3sy This might explain Sargeant’s royal appointment.

Thanks for those additions Marcie: it looks as though he was at 85 High Street Portsmouth to some point between 1839 and 1842.His transparency in Broad Street as part of the celebratory illuminations in 1842, plus the 1845 insolvency appearance address, suggest he had then moved there. By 1861 he was back in High Street, probably no. 68 from the second bankruptcy appearance in February 1868. Update attached.

Thanks for pointing out the slips: easy to cross wires while disentangling and newspaper typos (68 for 63 for example) don't help.
Corrected version below.

We can leave this running for another week before I suggest closure, primarily to see if there is any advance on the Sargeant originally pointed out as painting in the 1880s.

Henry Sargeant I was born in 1798 in Botley, Hants. He had several children with Sarah Elcock (they married in Fawley) between 1818 and 1837 and he died aged 70 in September 1868 in Hampshire. Henry had a large family, one of his oldest if not the eldest was named after him, Henry II; his son had already left home and was married soon before the census of 1841.
The Henry I, 1841 census, only mentions an older daughter aged 20 and younger children from ages 14 to 2.
The son Henry Sargeant II was born in 1818 Southsea/Portsmouth, and baptized 29 Nov 1818 at Fawley, Hants. His parents are named on the record. The son is possibly of more interest. He too is a painter and decorator. The census reports from 1851 describe him as a painter. The probate record on his death in 1859 says painter and decorator.

His immediate family has something of an artistic bint. He married Emma Jelley (born Portsea) on January 3, 1841, on Portsea Island. They had two children. The wife Emma as a widow dealt in fancy repository and stationery.
The daughter Emma born 1844 was a music teacher.
Their son Henry Edwin Sargeant III, born Portsmouth, was according to the census reports from 1861, age 16, a photographer. The 1881 census says he’s 33, born in Southsea, and is in Gosport as a photographer.
The 1891 census age 44 he’s still a photographer living at Somers Road, Portsmouth.
However for the 1901 census it tells us he’s 55, a painter (own account), and living in Justia Road, Portsmouth.
All these census reports confirm he is a bachelor living with his mother and spinster sister.

The given dates for the son and grandson neatly explain away the dates of the known artworks, and any gap in the work from the death of the second in 1859 … to a possible refocusing of career of the third before his passing in 1919.

Those are very useful details, Jim. Emma Sargeant (née Jelley/Jelly) (1823–1913) is mentioned in several articles. After the death of her husband Henry Sargeant II in 1859, she placed a notice in the newspaper that stated that she would continue his business at 84 High Street, Gosport. She called him a “Painter, and Decorator” but herself a “Decorative, Yacht, Ship & House Painter, Plumber, Etc.” She was declared bankrupt on October 19, 1864, when she lived at 84 High Street, Gosport. Henry Sargeant II (1818–1859), would have been too young to have a royal appointment in 1836. And, the newspaper in 1861 called Mr. Sargeant “a local artist of some repute” not “a late local artist of some repute”. Henry Sargeant III could have imitated the style of his father and/or grandfather.

The biographical corrections for Henry Sargeant I (b. 1797, not '98) which come out of that are:confirmation that he married Sarah Elcock at Fawley; that had eight children (not six); and that the second Sarah listed in the 1841 census was his eldest daughter aged 20 (not a sister aged 26 as the ill-written 0 seems to make it).

It's clear enough that his son Henry II (d.1859) was another 'painter-decorator'. The description of his grandson Henry III as a 16-year-old 'Painter' in the 1861 census and then again in 1901 (with 'Photographer in 1881 and 1891) is not clear as to meaning. In the first instance it is more likely to be 'house painter' given that his mother was continuing Henry II's business. So far the only thing suggesting he might have been an 'artist' at any point is the 1883 'Off the coast' painting that Jim started this off with.

There may be a signature, lower left, on the Pearl/America picture: can Art UK supply an enlargement (NMM doesn't have a modern image only a B&W)? There are a couple of well-signed others on the web for comparison.

Title
The Yacht 'America' Racing Against the 'Pearl'