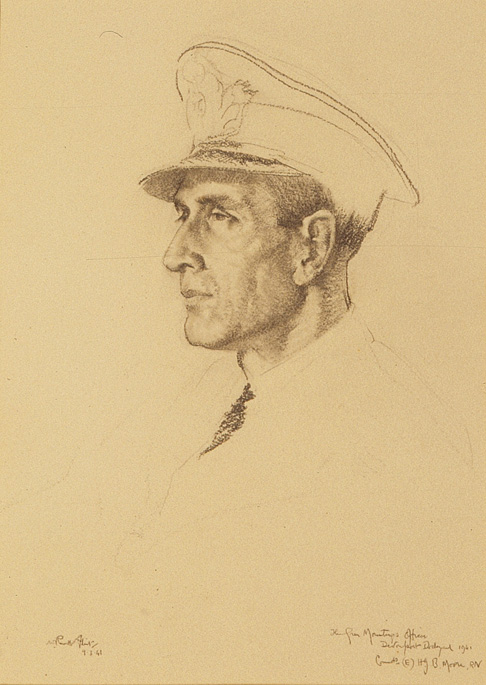 This is a portrait of an Engineer Officer responsible for X Guns – in a ship, normally, A and B gun turrets are forward and X and Y gun turrets after.

I cannot help with the dates of the sitter. The 1920 Navy List shows him as a Sub Lt (E) with seniority of 1st October 1919. The 1951 Navy List shows him as a Rear Admiral (E) with seniority of 2nd April 1949. Unfortunately neither give his date of birth or full Christian names. I suspect a birth date of say 1895–1900 but cannot identify him in the BMD records without at least a full first name.

The collection has found the attached in the Bath Weekly Chronicle and Herald. It gives a bit more detail about his career but no first names, sadly.

This discussion is now closed. A more detailed painting description has been added to the record, which will be visible on Art UK in due course.

Rear Admiral Humfrey John Bradley Moore CBE RI died on 4 May 1985 aged 86. He was Engineer-Manager of Rosyth and Devonport Dockyards and Rear Admiral (E) on the staff of C-in-C The Nore, 1950-52, and a member of the Royal Institute of painters in Watercolours.

(from brief obit. notice in The Times of 8 May 1985. His son Harry John Bradley Moore's engagement announcement in the Time in Dec. 1960 shows that the father was then living at Ightham, Kent)

Humfrey John Bradley Moore was born in Knutsford in Cheshire on the 16th of May 1898. By the time he was 12 he was a scholar in Hildenham House School in St Peters, Broadstairs in Kent.

He was serving on the 'Resolution' Feb of 1917 and by May 1918 was based at the Royal Navy College at Keyham serving as a Sub. Lieut.

He married his wife Doris M.Best in Worcester in the second quarter of 1925. It was announced in the Supplement to the London Gazette 7th June 1951

To be Ordinary Commanders of the Military Division of the said Most Excellent Order:-
Rear-Admiral (E) Humfrey John Bradley MOORE.

As was said in the above post, his death was registered in the Maidstone district of Kent in May of 1985.

Is there supposed to be an attachment to the original posting please?
Thanks.

Here is his service record until 1926.

As E. Jones states above Humfrey John Bradley Moore was born in Knutsford, Cheshire 16 May 1898.

Harry and Mabel married 1 Aug 1891 in Fairfield, Derbyshire and their daughter Constance Alice was born 12 Dec 1895. Humfrey John Bradley appears to have been their only other child. Father Harry died 10 Dec 1906 when Humfrey was 8 and mother Mabel died 14 Oct 1912 when Humfrey was 14. A bit of a sad start in life, but Humfrey succeeded in his chosen career.

Moore, who was educated at Rugby School (1911-16) and the RN College, Keyham, was known as just "John Moore" as an artist, and became a member of the RI in 1953 (just after his retirement from the Navy). William Russell Flint was of course mainly a watercolourist himself, and became an Honorary RI at much the same time (1955).

Russell Flint did relatively few portraits - a pity, they are very good - and though Moore was 12 years his junior it seems likely the two men knew each other personally. Both were members of the Arts Club, and both had served in the Royal Navy during WWI - Flint, whose brother-in-law Murray Sueter had overseen the creation of the RN Air Service before the war, became a RNVR Lieut in the RNAS working on dirigibles 1916-18, before being transferred to the fledgling RAF. He became Admiralty Overseer on Airship R34, which made the first East-West aerial crossing of the Atlantic in 1919 . One suspects that he and Moore - a sailor, an engineer of "high scientific attainments" and a "very strong personality"- would have found much to talk about as well as art.

This is Flint's oil portrait of Murray Sueter: Flint claimed in 1964 that it was the only one he painted, which may effectively have meant the first (in 1928) though there is only one more (1929) in UK institutional hands (Magdalen Coll., Oxford)

Thank you everyone for your help/comments/research. I have updated our records accordingly.

On the arguable pretext that naval officers constitute a 'maritime subject' I think the discussion can now close, with thanks to the other contributors.

I've just seen that the full description here confirms "the sitter had been a friend of the artist since the 1920s...."

Yes, Pieter, I hadn't realized just how rare his proper portraits were, though a number of ones he did of his models are named. There are also a few chalk or pencil sketches like our one online, such as http://artnt.cm/2EPnuRm , http://bit.ly/2mGEDVK , and this one of Munnings http://bit.ly/2mFrQD5 .

A few years ago this charming portrait sketch of his wife's sister-in-law Amelia Sueter (attached) came up at Bonhams Oxford, which I was keen to buy - sadly it was withdrawn before the sale...though not so sad, perhaps, if it was kept by the family.

It didn't upload (Edward, is the site having problems?), so I'll try again.

The collection has kindly provided an updated painting description for this record, so I will now close this discussion.

Medium and Support
graphite on paper

Description
This drawing was donated by the artist to the War Artists' Advisory Committee (WAAC) scheme (No. LD 1231). Sir William Russell Flint obtained permission from the Admiralty to paint Devonport dockyard (Plymouth). He used this opportunity to produce work for his Royal Watercolour Society Diploma. Flint also produced pictures of bomb-damage in the dockyard. The sitter, Humfrey John Bradley Moore (1898–1985) had been a friend of the artist since the 1920s. Moore started his Royal Naval career during the First World War and eventually retired with the rank of Rear Admiral in the 1950s, having served in the Engineering branch of the service. He was a talented watercolourist as well and joined the Royal Institute of Painters in Water Colours after retiring from the Navy. Moore would often accompany Flint and his wife on their painting trips to France.