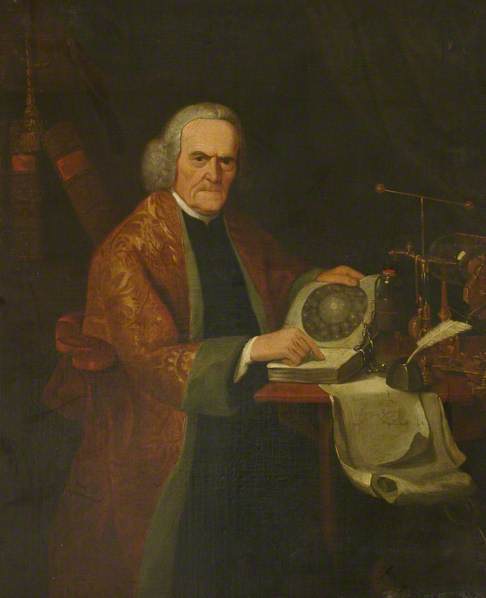 This is possibly a copy after the portrait by Wright of Derby, rather than the original, of which Robert Hancock executed a mezzotint which was published by W Richardson in London, with impressions in the British Museum (https://bit.ly/3us1zJX) and National Portrait Gallery (https://bit.ly/2Rs3sYF).

The Collection has commented: 'In relation to the attribution of the painting, we have long questioned this ourselves but never had the time to take forward. The painting originally came from the Gabb Collection of scientific portraits and this is where the attribution stems. It would be interesting to know if anyone else knows of a portrait painting of Richard Lovett by Joseph Wright? We spent quite a lot of time last year researching this issue and consulted with Lucy Bamford, Curator at Derby Museum about this painting. The suggestions were that the portrait certainly lacks the quality and attention to detail of Wright’s work, nor is it in the Wright’s account book at the NPG archive, although this is not the end of the matter. [Neither is it in Benedict Nicholson's catalogue]

There were a few thoughts including that the original portrait might have been touched up or over painted at some point. Another explanation is that the ‘I. Wright’ referred to in the print inscription is not Wright of Derby but another painter entirely. Lucy Bamford wondered if it might be the American Joseph Wright, who was in England in the late 1770s until 1781 could be a candidate here? He appears to have exhibited work at both the RA and the Society of Artists in 1780; the latter a painting of an unnamed gentleman. On this point we were not sure who to seek advice from. There is apparently a catalogue of his work was published in 1985 by Monroe H. Fabian for the Smithsonian but due to the current covid situation I have not been able to access a copy.'

The book on Joseph Wright not of Derby is actually a catalogue of the exhibition of his works held in 1985 at the Smithsonian Institute, and is called "Joseph Wright, American Artist, 1756-1793". I have a copy, but am unable to access it for a couple of weeks. I will check it out asap. This Wright painted several portraits of Ben Franklin in Europe, & went on to design some of the early post-independence American currency.

It’s a copy and you can find the original information under. Portraits – In Print Exhibition
Engraving, Richard Lovett, after Joseph Wright of Derby, Engraved by R. Hancock, 18th Century, Inv. 90133

It is certainly not autograph Wright of Derby. Unfortunately, the print (NPG) does not say in whose hands the original picture was at the time, though presumably in those of the family. Also, the given date of c. 1760 seems too early even for the original, as the sitter looks rather older than c. 68.

If this is not after Wright of Derby, it could obviously be an original by someone else, such as the American Joseph Wright. That could explain why the picture is not in Nicolson.

The book, “Joseph Wright, American Artist, 1756-1793”, by Monroe H. Fabian, which Christopher identified, can be consulted by the hour on the Internet Archive.

We should seriously consider whether Richard Lovett (1692–1780) was painted by this American artist while he was in London in the late 1770s or even in 1780. I suspect that it has nothing to do with Wright of Derby.

The example of the engraving after the picture in the National Portrait Gallery has the address, 174 Strand. The British Museum site suggests that the publisher, William Richardson, was at this address, 1783-85. Looking at the prints by this publisher on the National Portrait Gallery site makes me think that Richardson may have been at this address somewhat earlier, possibly by 1777. However the sheer number of prints issued under the name of this prolific publisher, who operated from several addresses, makes this hard work. The standard books on 18th-century engravers are not accessible to me at the moment.

We should consider whether the print was published shortly after Lovett’s death in 1780.

The dimensions of 76 x 62.3 cm suggest this was originally a 30 x 25 inch canvas, before it was 'marouflaged' onto fibreboard which was probably done at the NMM before it went to Oxford in 1960 as a long loan later converted to gift (1986). That is an unlikely size for the original of such a subject: 50 x 40 would be more likely, so 'after Wright' is the probable conclusion irrespective of which Wright it is. The provenance in the Gabb Collection is unsurprising: NMM received that whole via its founding benefactor Sir James Caird, including a large holding of watches which were later 'collection-swapped' with the Science Museum. The larger oil on canvas which accompanied this painting to Oxford in 1960 and was also later transferred (their ref 56486) is of another natural philosopher, J.T. Desaguliers (1683-1744). Greenwich of course kept everything ex-Gabb that is maritime or astronomy related, including all five of the Galileo portraits that Gabb had acquired - the largest group (exc. prints) that there is, inc. the earliest and latest 'from life' and two busts (17th and 18th c).

Rather than being by either Wright of Derby or Wright of America, this painting is more likely to be by J. Wright of Frome, in Somerset.

In the DNB entry for the engraver Robert Hancock (1730 - 1817), it mentions that he engraved "after J. Wright of Frome, portraits of W. Hopley, Verger of Worcester Cathedral; of J. Wright (the painter’s own father); of himself (Hancock)...".

On page 619 of John Challoner Smith's 'British Mezzotint Portraits' he lists the following work by Hancock:

"A small mezzotint of Wright of Frome, father to Wright the painter, is catalogued in the Buckingham sale (1834), lot 3,028. The print is mentioned by Bromley, page 416, but not as a mezzotint."

Michael Bryan, in his 1849 ‘Dictionary of Painters and Engravers, Biographical and Critical’ identifies the painter’s father as “James Wright, of Frome”. By contrast, the father of Joseph Wright of Derby was John ‘Equity’ Wright, a local attorney.

In John Chambers’ ‘Biographical Illustrations of Worcestershire’, he adds that Wright of Frome was employed by Mr. West, though this is contradicted in The Academy review below :

According to the British Museum’s records, William Richardson operated from 174 Strand from no earlier than 1783 and at least until 1787. By 1794, he was operating from 2, Castle Street, Leicester Square. According to John Challoner Smith’s ‘British Mezzotint Portraits’, a print of ‘Lady Elizabeth Delme and children,’, after Reynolds, was published “April 1790 by W. Richardson, Ancient & Modern Print Warehouse, No. 174, Strand.”

On this basis, the print of Richard Lovett, as well as that of William Hopley, must have been made (or certainly published) between 1783 and c.1790.

In 1886, the Chiswick Press published A. Randall Ballentyne's "Robert Hancock & His Work". The review of it, in The Academy, of July to December 1886, carried the following line:

"It is certain that Joseph Wright of Derby was not the son of James Wright of Frome."

In a biographical text in 'The Reliquary and Illustrated Archaeologist' (1863/1864), W. Bemrose mentions that Joseph Wright was "usually known as "Wright of Derby" in contradistinction to another painter of the same name...". This is unlikely to have been the American Joseph Wright, as the "Wright of Derby" usage was already in place by the 1760s, when the American painter was still a boy.

Exactly who Wright of Frome is has yet to be established, but he is likely not to be either Wright of Derby or Wright of America. If this is the case, then the NPG and the BM entries (and elsewhere) for the 174 Strand prints of Richard Lovett and William Hopley in their collections need to be re-attributed.

One interesting article appeared in the Worcestershire Chronicle, of Saturday 21st September 1901, in which it is mentioned that portraits of Robert Hancock, Richard Lovett and William Hopley were donated to the Victoria Institute in Worcestershire by R. W. Tomlinson. Whether these were originals or prints is unclear, but if the whereabouts of the Victoria Institute collection is known, perhaps its catalogue could be consulted to establish these portraits' locations.

It might be useful to know if all (or any) of the detailed engraved and printed inscriptions that the Hancock print clearly shows were visible in the prime version of the portrait are readable on the Oxford painting. Slight differences between the latter and the print suggest the Oxford oil is still 'after' whichever of the three Wrights painted the original: e.g in the print the ink-pot is firmly on the front of the table, but in the Oxford oil overlapping the front edge.

Given this existence of a Wright of Frome, it is necessary to investigate whether he painted the portrait mentioned above of Peter Labilliere [1725- 1800] , engraved in 1780 by Henry Kingsbury. He was from Dublin and bizarrely buried upside down on Box Hill. A major in the British army he became a political agitator and frequent correspondent of Benjamin Franklin, and also known as Peter Labelliere. In 1780 he may have been living in Chiswick

“Joseph Wright, American Artist, 1756-1793”, by Monroe H. Fabian, was published on the occasion of the 1985 NPG, Washington, exhibition but the catalogue is ”a catalogue raisonné of all the works of Wright that have survived or have been recorded” (foreword, p.9). There is no mention of this portait, or of one of Lovett. The American Joseph Wright does not seem to have been as sophisticated an artist as the author of this portait of Lovett. He was a student at the RA Schools from 1775 and moved to Paris in 1781 and was back in Ameica in 1781.

The Science Museum's copy of the mezzotint print is dated by them to 1766, as is Oxford's portrait. On what basis, I wonder?

The dating to 1766 is most likely based on one of the main publication dates of Lovett's 'Philosophical Essays':

The link above leads to Lovett's 1766 edition wherein the two charts illustrated in the painting as well as all of the instruments that can be see on his table are represented by various plates at either end of the book, prior to the appendix.

Although the book was originally published in 1758, attached is the advertisement that appeared in The Oxford Journal of Saturday 9th August 1766 announcing the issuing of a later edition of Lovett's 'Philosophical Essays'.

Also, the attached extract from the Worcestershire Chronicle, of Saturday 3rd August 1901, seems to clarify that the portraits donated by R. W. Tomlinson to the Victoria Institute were Hancock's prints and not the original paintings.

The relevant entry regarding Wright of Frome from Henry Bromley's 1793 'Catalogue of Engraved British Portraits' is attached.

The Mr West mentioned in that entry from Bromley's catalogue is presumably the painter Benjamin West.

He is most probably and the confusing issue there is that Benjamin West was the mentor of Joseph Wright of America, the latter having " learned to model in wax with his mother Patience Lovell Wright; painting under Benjamin West and Wright's brother-in-law John Hoppner...".

It could be that, even as early as Bromley's 1793 catalogue, all of these J. Wrights were being mistaken for each other.