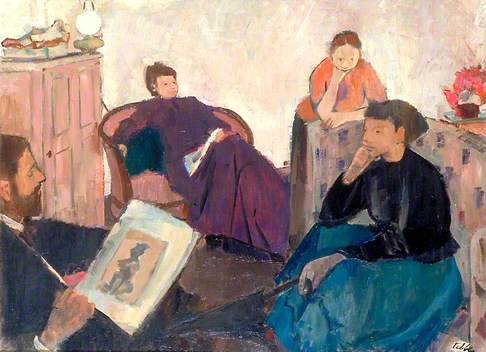 Does anyone have a suggestion for the image shown in the catalogue or magazine in the foreground? Or any thoughts about who the sitters are?

'We would be delighted if any Art Detectives could get onto this on our behalf! There's information in our records about Tibble's interest in Les Nabis and how this painting shows their influence, but nothing on the identification of the figures or the magazine.'

The Government Art Collection are now in touch with the artist's family and full cataloguing and research is underway. Fuller information about the painting will appear on Art UK in due course.

I beleive the magazine picture to be more like a member of the South African Khoi people, for obvious reasons.

I agree with Martin that the reproduction appears to show a West African sculpture. I don't see it as a magazine, but as a colour plate attached to a plain sheet of paper arranged as a folder. In the late '40s and early '50s there were many publishers offering colour reproductions. Skira and Cahiers d'Art come to mind. The girl on the right wears a very 'New Look' outfit (c.1950).

Betty is undoubtedly correct about the image of the sculpture being a loose colour plate. The woman beneath the lamp may be holding another one. The bearded figure is almost certainly a portrait [whether of an academic , collector or connoisseur] . The group almost looks like an informal seminar. There are references to Gauguin and Degas

What puzzles me about this painting is that it looks as if it were painted from life. It could have been completed within a few hours. But the sitters look very 19th century, or at least turn of the century. Tibble was born in 1909 and must have painted this when he was in his twenties; it isn't the work of a teenager. So it must date around 1930. No-one would have dressed like that then.

The dress may indicate that Tibble was basing his painting on an earlier photograph.

Pretty sure that Charles is right to say that this is knowingly a history piece. But I think the Nabis clue is the most interesting. Tibble was interested in Objective Abstractionism, so perhaps saw the Nabis as an interesting precedent? I also find myself wondering whether this is a painting of mansplaining in action -- a group of (not exactly riveted) women being given a lecture about aesthetics by a man who hasn't yet noticed that he's lost his audience. Which would give the title a sardonic edge.

It may well date c. 1945-6 and may have been in Tibble's first one man show in 1946 at Tooth's . He certainly painted 'historical' subjects as his 'Impresario' features Diaghilev. Connoisseurship was a subject in a number of his early post-war paintings . There is quite a group of Nabis influenced interiors in British public collections. This picture has a 'Bloomsbury' feel
Which British enthusiast for African art sported a beard like this?

Valerie Holman of Wimbledon College of Art who is very familiar with French illustrated journals of this period might well recognise where the image held by the man with the beard was published.

This has been a fascinating topic. Martin refers to his show in 1946. Tibble had a further show at Tooth's in August 1949 at which Discussion was shown. It is illustrated in Cora J Gordon 'London Commentary', The Studio, vol 138, no. 677, p. 62. On the exhibition, Gordon comments (p.63) 'Geoffrey Tibble at Tooths again has examples of his feeling and dexterity in treating figures as dark masses against light backgrounds. His methods of composition and expressive volumes are becoming rapidly more personal and painterly'. This is well-said. Tibble was a most interesting painter and his work chimes with that of Elinor Bellingham-Smith, Lionel Bulmer, Margaret Green, John Napper and others of the same period. The woman on the right of the picture generally recalls figures in the early work of William Scott. We may assume that Discussion was a recent work in 1949 and it is exactly what one would expect a figurative painter to be doing at that date.

As for the illustration under discussion - that needs further thought.

There must surely be Tibble descendants. Is someone working in the London Group in the post-war period when Tibble was a member?

Thank you for all your interesting comments so far. Please note that Tom has written an 'Artwork in focus' story for Art UK about this painting:
http://artuk.org/discover/stories/artwork-in-focus-the-discussion

Naturally if any new information comes to light through Art Detective this could be reflected in a new version of the article (if Tom wouldn't mind!)...

Tibble had an earlier exhibition in 1938 at 13 Fitzroy Street, W1, which was presumably his studio, since the address had previously been occupied by Francis Dodd and Frederick Hines.

Potential candidate for the location perhaps.

Charles Griffin's point about anachronistic dress relates to what was recognised by Tibble's contemporaries, that his work was strongly inspired by Degas, Vuillard and others of the turn of the century. Of Tibble's paintings on Art UK (previously Your Paintings) at least ten are of figures in what must be deliberately clothes of that period (long full skirts, blouses and jackets with puff sleeves, hair in buns, etc.), in line with his compositional approach. I suspect that these consciously anachronistic elements would make it unlikely that it depicts a real situation in which the identification of a specific illustration is likely.

Stylistically his work is close the contemporaries Kenneth mentions, but in terms of content? Most unusual I would think. It would be interesting to see the exhibition catalogues of his Retrospective Exhibition, Manchester Art Gallery, 1958, and 'Geoffrey Tibble. Wives & Daughters', Jonathan Clark Fine Art, London, 2002, for further clues as to his motivation.

I agree that the women in this delightful picture seem to be a 'conjuring' up of the c 1900 period- with full length wide skirts, high necked bodices as suited for day wear then and c 1900 hair. Indeed the male figure seems the same to me.

Yes, this must be right: his pictures (including this one) clearly depict an earlier age. Martin Gayford's S Telegraph review of the 2002 retrospective described his work as "...dingy but packed with period atmosphere...".

Though no longer very relevant, I can confirm that 13 Fitzroy St was his home: he had a telephone listing there from 1936 to 1939. He reappears at Beaconsfield for a few years from 1942, and thence by 1950 to Chalfont St Peter where he later died.

The bearded man is indeed my father, Geoffrey Tibble; I would think he painted this in the early '40s. He seldom painted himself, but my mother was his model - the women in his paintings all with similar faces and timeless clothes, usually 2 or 3 in domestic settings often with an umbrella, or a telephone, sometimes depicting a pottery vase or piece of furniture from our home as was the ebony African sculpture pictured in the 'catalogue'. In August, 1952 we moved back to Beaconsfield from Chalfont St Peter, where he sadly died in the December.

Thanks for confirming his identity Gina: I thought he looked familiar!

Many thanks for contacting Art Detective, Georgina. Your information is invaluable and you have answered a number of our queries concerning a most interesting painter.

It would be fascinating to know if the African sculpture - or the illustration of it - still exists?

I am also the artist's daughter and, added to the information provide by Gina above, I have attached a photo of an African wooden carving which is in my possession and is highly likely to be that which is the subject of the catalogue or magazine in the foreground. This, together with the curved settle, was in our family home. Also attached is a photo which shows the resemblance of the man in the painting with the painter himself.

So impressed that this has been resolved. I feel almost greedy for asking but do you know what the "discussion" was about? And why the Edwardian skirt lengths?

Tom and all the Art Detectives, we are simply bowled over by all the responses to our initial request for information! What a mine of rich detail most especially the first-hand knowledge from the artist's daughters, many thanks indeed to Georgina and Paula.

Our research of the painting can now be fully fleshed out and we would very much like to correspond with the artist's family if they are happy to do so. Please contact Chantal Condron, Curator of Modern/Contemporary Art (chantal.condron@culture.gov.uk) and we can take this further.

What a truly wonderful start to the success and relaunch of Art Detective!