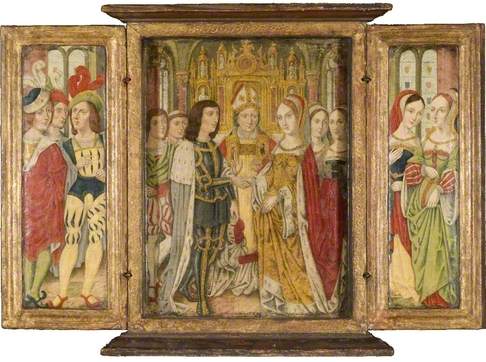 I believe most of the painting of the middle panel is by a different artist and that work is older than the outer panels. The middle section, except for the figure on the left behind the King looks closer to Tudor in style.

This can’t be Edward and Woodville. They had a secret marriage attended by one man and dog. Edward was taller, and Woodville was older and a widow. It looks like an idealised picture of the marriage of Edward's brother to Anne Nevill, daughter of Warwick the King Maker.

If you look at the windows in the background, those in the outer panels differ to the medieval windows of the inner panel, and the style of drawing for the figures is different. I believe that the painting was originally classified as English School, which should have been correct for the middle panel before the second artist added the outer panels and the figure on the left in the middle panel.

The central figure appears to be a Bishop, but Edward and Woodville had a secret marriage, and Edward was known to been very tall, while Woodville as a widow should have warn her hair swept up. She was a mature lady when she met Edward and already had several children.

I believe other identifications have been proposed for the couple such as Henry VII and Elizabeth of York, but the odd thing is that the 'King' looks suspiciously like Richard III. At the time of his marriage to the young redhead Anne Neville he would have just been the King's brother (Duke of Gloucester?).

I believe many of the Spanish Forger's works involved altering existing works instead of starting from scratch.

On 7th June 2016 I went to the talk on the Woodville Diptych at Northampton Museum by Dr Conny Bailey.

We were able to see the picture close up. One unusual detail was that the painting continued from the base of the middle panel forward onto the frame. This piece of the frame was the only part of the picture that was badly worn suffering a loss of most of the paint. This could be explained if the outer panels repeatedly rubbed this part of the frame when these panels were closed up.

Dr Bailey was not completely convinced that the picture was the work of the Spanish Forger, which might allow for an earlier dating than c.1890.

The collection comment – Dr Bailey has responded on behalf of the Museum thus:

‘I agree with Mr Jones in that the detail of extending the painted tiled floor onto the frame is unusual, and it is so in any kind of context. It was not a feature of Gothic or late Gothic altarpieces, nor works created during any other age of art history. Nor did the Victorians habitually extend scenes onto the frame. Why it should have been done in this context has to remain a mystery, unless we can locate further works by this artist that display similar treatment, in which case it may become an identifier of this artist's personal style.

The identification of the couple depicted also has to remain speculative, since there are no attributes or other identification marks visible. I agree with Mr Jones' suggestion that the physical features of the couple are more suggestive of Richard Duke of Gloucester and Anne Neville. Their depiction may be related to representations of both in the so-called Rous Roll, a genealogy of the Kings of England compiled by John Rous, 1483–1484 (British Library, MS48976), of which an image (one of two depictions of the couple in the Roll) was reproduced in J. Heneage Jesse, Memoirs of King Richard the Third... (London, 1862). However, all remains speculative.

I see no reason to believe that the central panel is older than the shutters. Painting technique, colouring and style are consistent throughout. The costumes are idealised late medieval fashions. I wouldn't like to hazard a guess as to the wood the casing is made from since all surfaces are painted with a brown stain. However, if it turned out to be oak then dendrochronological analysis would be possible to fix the likely manufacturing date.’

There are a series of illuminations by the Spanish Forger (sic) in the V&A - http://collections.vam.ac.uk/name/spanish-forger/36978/ - with more details about the artist including a bibliography

The figures seem very different from the ones in the V&A miniatures and in the other panels by Spanish Forger (different modelling, especially of the faces, different proportions of the figures) and also it looks like he rather specialised in medieval scenes, not early 16th c. I must say I am not entirely sure that this triptych should be attributed to so called Spanish Forger at all.

We now have two art historians doubting that this work is by the Spanish Forger. What is the way forward for the Museum? Would 'Anonymous' be correct or is no conclusion possible?

This does appear to be a little cruder than the generality of pictures by 'The Spanish Forger', but I think that it is worth continuing to keep it under the designation 'Attributed to 'The Spanish Forger'', as it is a forgery in quite the same vein, and it will attract the interest of anyone researching fakes of this type.
What is interesting is that the central scene appears to have been inspired by the anonymous late 15thC Flemish painting of the marriage of an unknown princely saint, that Horace Walpole called 'The Marriage of Henry VI' when it was at Strawberry Hill (it is now in The Toledo Museum of Art).
So far as I know, the identity of 'The Spanish Forger' remains to be established. There is an excellent discussion of the issue by Janet Backhouse, 'A miniature masterpiece by the 'Spanish Forger', in 'Quarto', the Quarterly Bulletin of the Abbot Hall At Gallery, vol. XII, No.4 (January 1975). Many years ago, I thought that I might have discovered it when, with a delegation from the National Trust, I visited the former home of the artist Herbert Alexander in Cranbrook, Kent. Not only was the large central room of the house hung with nothing but works that were evidently by 'The Spanish Forger', but other youthful pictures of his own provided evidence that he had then imitated the tempera techniques of paintings in the National Gallery. His daughter, who showed us the house, would say nothing about the pictures, neither saying nor denying that they were by her father. Herbert Alexander was born, however, in 1875, and the earliest examples of work by 'The Spanish Forger' are said - I'm not sure on what basis - to date from c.1890. Are they the works of a precocious boy (which might help to explain their crudity) ? But then why do they first turn up in Paris ? Or does Herbert Alexander have to be ruled out as an artist ?

Howard Jones in his original posing of this question remarks on the 'extended provenance' of the painting. In fact it was given to the museum only one year after the death of Sir Coutts Lindsay (1824-1913), by his daughters perhaps as part of their disposal of his estate. So it could have been acquired by Lindsay as late as the early 20th century. He was of course the founder of the famous avant-garde Grosvenor Gallery, a centre of the Aesthetic Movement. Described by a relative as 'a dilettante and amatur', he might have been a natural victim of such a forgery.

It is clear that this painting must be a forgery, but there are things about it, like the way in which the figures are placed within the picture space, which suggest that 'The Spanish Forger' may not be responsible. 'The Spanish Forger's' technique is quite recognisable, so inspection of the painting at first hand would be desirable.

I want to shift the argument to the subject of this painting and not to its maker. This is a highly unusual subject for a triptych, which in the old times, which are depicted here (or suggested by the painter), was a religious work of (private) devotion if the work was small enough to be carried around. We know many of the religious triptychs, e.g. from the Low Countries, are representing a the donors, the man mostly on the left panel, but I presume here on the middle panel, behind which we see his sons and the wife to the right panel with behind her daughters (alive or dead). If I look well at this central piece, the artist, whoever he is, has created a medieval, probably 16th century atmosphere with the donor couple standing very dominantly in the center and behind them a saint, as I take it. Because why in this world would anybody want to have a work of devotion, in which the central piece of devotion is a couple with their children and a bishop blessing their marriage? I do not want to enter the discussion about the maker, but it seems rather odd to me that nobody sofar has suggested this option. What do we see on the side panels? Male and female saints, or (more of) the children of the couple? I read that they had 10 and that their relation was heavily contested at the time. Is it just possible that someone copied an older painting with some finesse?

Thank you all for your points raised, they are most interesting. This is truly a fascinating artwork and we will add your comments to our artwork file.

Readers may be interested in Alastair Laing's comparison of this forgery with 'The marriage of an unknown princely saint', known as 'The Marriage of Henry VI' when it was at Strawberry Hill (now in The Toledo Museum of Art). If this or others like it were an inspiration to the forger, he/she would have thought of it as a royal marriage, not, as is now recognised, a saintly one. Adror Mackor's point is therefore subverted by ignorance on the part of the forger. This is the painting: http://images.library.yale.edu/walpoleimages2/strawberryhill/sh-000215d.jpg

There is a tapestry at Hever Castle showing a Tudor wedding of around 1514. It shows Mary Tudor marrying Louis XII King of France. One or more of the Boleyn girls might have attended the wedding.

Does the style of architecture of the windows in the middle panel of the Woodville Triptych suggest any particular cathedral or even a country of origin? Perhaps the back of the panels could provide more information as to whether this is a 19th Century piece or if it was painted in an earlier century.
Other sources for the picture of the Hever tapestry are available on the internet.

Today there is a painting by the Spanish Forger on eBay UK ;

No. 142997811610. Showing a medieval couple in typical medieval style costume which should be of interest to anyone interested in this artist's work and forgeries.

Title
The Marriage of Edward IV and Elizabeth Woodville (triptych)