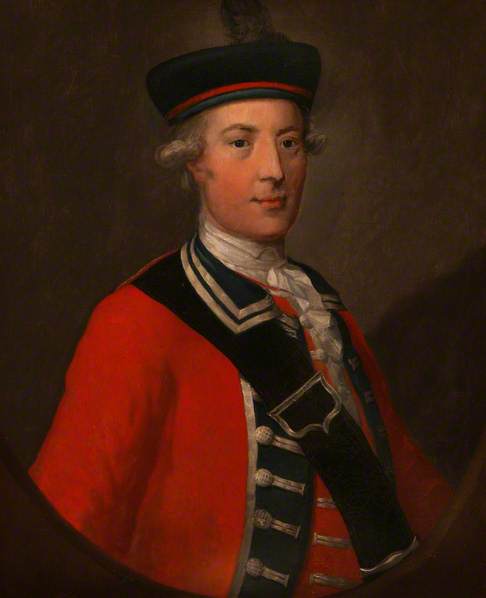 The subject wears a coat with blue facings, depicting a Royal regiment. The 42nd Highland Regiment were not granted this distinction until 1758, after the date assigned to this painting. Moreover, the coat has a turned-down collar, or 'cape' in the terminology of the day, which is usually dated to c.1768, the year a Royal Warrant authorised this style of uniform, although the cape decoration here is unusual and does not conform to regulation, which might date the portrait to before 1768 as fashion did sometime precede official authority.

Curiously, though, the officer wears a red waistcoat with laced buttonholes which ordinarily would denote a member of the Light Infantry company attached to each infantry regiment after 1771, although he lacks the laced shoulder decoration, known as 'wings,' that was also a Light Infantry distinction.

The bonnet shows narrow red decoration on the band which was in evidence in the 1750s and 1760s. By the early 1770s, the 42nd were recorded wearing cocked bonnets with bands of checked 'dicing.'

Most importantly, however, the 'lace' button-hole decoration on the lapels would have been in gold for an officer of the 42nd, rather than silver, as shown here. Whatever regiment the sitter was belonged to, it does not appear to have been the 42nd – but since there was no other Highland regiment that bore the title 'Royal' until the 19th C, it would be difficult state an alternative. Back to square one.

'All the information we have on the painting is included in the info above. We think the execution date above is (roughly) correct, based on family info and research by other historians.

As stated in the info, we are now fairly sure that he was NOT, in fact, in the 42nd. So dating the painting based on the Regiment's uniform is spurious – uniform references should be made to the 114th Regiment.

The association with the Regiment was an assumption made some decades ago but cannot be backed up by any documentation. Also his uniform is wrong for The Black Watch full stop.'

'This painting depicts Murdoch Maclaine of Lochbuie, who was Lieutenant in the 114th (Royal Highland Volunteers) Regiment of Foot. He gained that rank in 1758.'

This amend will appear on the new version of the Your Paintings website in January 2016. Thank you to all for participating in this discussion. To those viewing this discussion for the first time, please see below for all comments that led to this conclusion.

Have you spoken to Andrew Cormack at the RAF Museum? Despite his current role he is an expert in British Army uniform of this period. He was really very helpful when we found ourselves in a similar postion with one of our portraits.

This portrait was thoroughly considered in the Journal of the Society for Army Historical Research in 1999 (Vol. 77, pp, 69-70, and subsequent Notes). The sitter and uniform were effectively identified by John Houlding and the late William Carman as Murdoch Maclaine of Lochbuie, in his uniform as a Lieutenant in the 114th (Royal Highland Volunteers) Regiment of Foot, c. 1761-1763. The 114th had blue facings and silver lace, and the overall style and cut of the uniform in the portrait are consistent with that date. Murdoch Maclaine's commission history apparently revealed no connection to the 42nd.

I attach a link to the British Empire website to which I send contributions connected with the armies of Britain and the Empire. I have recently completed a history of the 42nd Highland Regiment and the attached page deals with the uniforms:

My original comment arose from the tentative dating of the portrait to ca. 1755 which, for reasons indicated, could be not correct for the 42nd Royal Highland Regiment either in terms of date or uniform specifics, and still less for the 114th Royal Highland Volunteers, which did not exist at that date.

The phrase in the BBC caption, "who was Ensign and later Lieutenant in The Black Watch" is a little misleading as it appears to be a statement of fact, rather than part of the Maclean family tradition. The discussion of the sitter's uniform in comparison with that of the 42nd was in the context of that statement and the fact that the painting was shared by The Black Watch Museum, who will doubtless be pleased to know of the 1999 JSAHR article and its conclusions, assuming they were not already aware, as would appear.

Thanks all! Confirming what we already believed - Murdoch is depicted in his 114th uniform. We'll see if we can get the execution date updated.

Following the very helpful discussion above, and particularly the reference to the article in the Journal of the Society for Army Historical Research posted by Christopher Bryant, I think this discussion can be concluded, if the Black Watch Castle & Museum agree.

The portrait of Murdoch Maclaine (19th) of Lochbuie, whose dates are 1730-1804, is shown in the uniform of a Lieutenant in the 114th (Royal Highland Volunteers) Regiment of Foot (as Christopher has noted). He gained that rank in 1758. The article cited dates the portrait to c.1761-63.

Yes, as I said above, this confirms what we already believe. Happy for the discussion to be closed out whenever the moderators see fit.

Description
This painting depicts Murdoch Maclaine of Lochbuie, who was Lieutenant in the 114th (Royal Highland Volunteers) Regiment of Foot. He gained that rank in 1758.