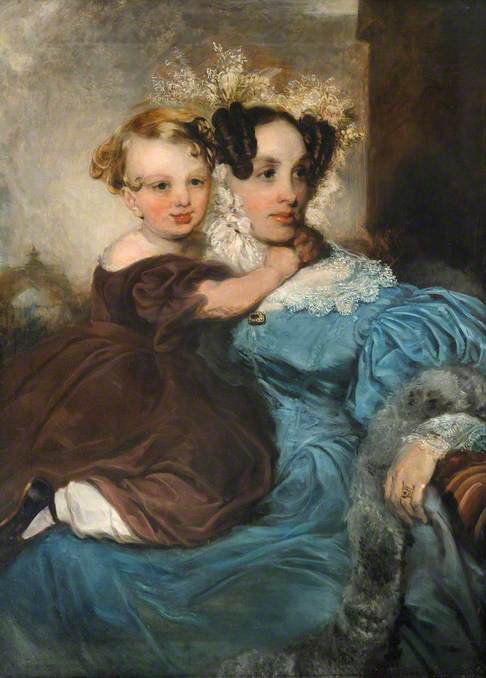 This portrait is described as Mrs Mary Linsdell (b.1805) and her daughter Annie (b.1841) and was donated in 1942 by Annie’s son-in-law. Annie was the fifth child and third daughter of Mary and her husband Thomas. The portrait is by John Robert Wildman – portrait, landscape, historical and animal artist – of London.

We are now starting to question whether the child shown is actually Annie. Wildman stopped painting in 1842 following the sudden death of his wife. If it is Annie in the painting, she would have actually been just a few months old when it was completed (having been born late 1841). This clearly doesn’t fit.

We know there is a companion portrait to this, showing Thomas Linsdell and their first daughter Mary, by Margaret Sarah Carpenter. Why would the Linsdells choose to have their first child included in the portrait of Thomas and the fifth child included in the portrait with Mary, when children two to four all survived to adulthood? We now suspect that our portrait shows their second child and first son, Thomas (b.1835).

1) Are the costumes shown in our portrait consistent with those from around 1837?

2) Could the child shown be a boy, dressed in normal pre-breeching gown of the period?

PCF note: The record of this work on Your Paintings currently gives the sitters' surname as 'Lindsell'. This has been amended and the correct surname, 'Linsdell', will appear on the new version of Your Paintings in January 2016.

This amend will appear on the new version of the Your Paintings website in January 2016. Thank you to everyone who has contributed to this discussion. To those viewing this discussion for the first time, please see below for all comments that led to this conclusion.

Betty is quite right. I would even go so far as to say that the child is definitely a boy - partly the hair, partly the face, partly just something in the way the artist has portrayed him in terms of pose and energy.

I'd agree that the child is most likely a boy. The untrimmed dress in brown would be a very odd choice for a girl. Nothing in the dress, pantellettes, or shoes would be inconsistent with young boys' dress.

Yes, almost certainly a boy, - very common to dress boys in this manner until up to the age of 7. See comparable dress here: http://www.vam.ac.uk/moc/article/boys-dress/ and http://collections.vam.ac.uk/item/O1131168/dress-unknown/

I too was convinced at first sight that this portrait could well date from 1837, but on close looking, and just to complicate things, I now believe it to be earlier – maybe 1831–34. Elizabeth Lindsell has her hair up in an 'Apollo's knot', with high ringlets over her ears – and the top of her chignon hidden under her cap, which is maybe of blonde silk lace to match her collar. Her sleeves are huge and gathered with only a slight drop on the shoulders. By 1837 sleeves had dropped down over the arm far more than this and the Apollo's knot had gone right out of style.

Using census records for 1851 (conveniently summarised on the website "Pubshistory") and the Ship Inn, Barking, it is clear that the child must be Thomas junior, as he was aged 16 in 1851. All the children born after him came along in or after 1839.

If everyone agrees, I would say it is easy to conclude this discussion.

The surname spelling on Your Paintings should be adjusted to Linsdell.
If Thomas 's date of birth is confirmed as 1835, then he is the child in the picture and it should be dated c.1837.

The high fashion of c.1831-34 Lou Taylor refers to might have taken a little while to reach Barking. Thomas Linsdell senior was the proprietor of The Ship from 1832 so commissioning portraits of himself and first child and his wife with their second child in the mid-1830s can be seen as a confident commemoration of his status.

The collection has been contacted.

Thank you to everyone that has commented on this post. You have confirmed our suspicions regarding the misidentification of the child on the portrait. We can now update our records to show that the child is Thomas Linsdell, born c1935.

Description
Mrs Linsdell was the wife of Thomas Linsdell, a prosperous fishing smack owner and licensee of the 'Ship Inn', Heath Street, Barking. Over her left shoulder can be seen the north gate of Barking Abbey, of which very few illustrations exist. The north gate originally contained the Chapel of St Nicholas (first mentioned in 1456) and was demolished in 1881.