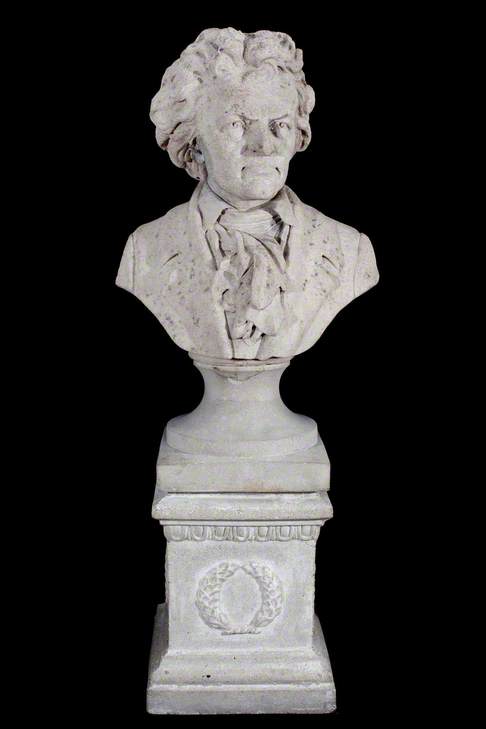 This bust of Ludwig van Beethoven was formerly on the edifice of the Queen's Hall, London. There should be a record of the sculptor/architect.

The Collection has commented: ‘Having checked our collections management system, we have found the following notes made by the cataloguer that may help in the research of the creator of the busts. They also indicate where all of the papers and records relating to the Queen’s Hall are housed if someone is able to look into these.

Unfortunately, we don’t know for certain who the sculptor was, but perhaps these notes might help the art detectives in their research:

“The architect of the Queen's Hall was T.E. Knightley, although there was some dispute with a second architect called C.J. Phipps, with whom he had prepared the original plan; this was resolved with Knightley being awarded the title of 'architect'. (see The Builder, 30 December 1893). At this stage the building was still known as the 'Victoria Concert Hall'.

The records say that S.W. Elmes did the carving, whilst 'external ornamentation' was by the Parisian firm of Noel Quillet. Robert Elvin, in his book on the Queen's Hall, also notes the sculptural contractor as 'Mr C. Wall of Chelsea'.

Notes in the National Monument Record record that 'the busts of famous musicians from the facade of the blitzed Queen's Hall are now (1953) in the care of the 'St Marylebone Society'. They were on view at the Imperial Institute, SW7, Nov-Dec 1953'. Another note, in Westminster Archives, records: 'Queen's Hall after the bombing - the small busts in niches rescued by St Marylebone Society ... stored with Royal Acadamy [sic] of Music about 1950, with four others of minor composers'.

The building was finally pulled down in 1953. All the records, correspondence, specifications from the architect, original plans, drawings and engravings for Queen's Hall, 1891-1908 are in CRES 35/2144 in the National Archives (including initial plans and documentation dated 1908 to turn the hall into a National Opera House), with further information in other files Westminster Archives holds a reasonable collection of photographs of the damaged hall, and the National Monument Archive has excellent photographs of the original interior.’

I take it the bust is unsigned, especially on the back we cannot see. Can the collection confirm that?

Here is an article on the UCL website about various London sites, including the Queen’s Hall.
https://blogs.ucl.ac.uk/survey-of-london/tag/south-east-marylebone/page/2/

The article includes this text:
“The photograph at the top of the page shows only some of the abandoned composers in profile (the complete set consisted of Brahms, Gluck, Handel, Mendelssohn, Wagner and Weber). By then the full busts (Bach, Beethoven, Haydn, Mozart, Purcell and Tchaikovsky) had probably been rescued by the St Marylebone Society with the aid of the Royal Academy of Music. For years they adorned the garden of a cottage in Olney, Buckinghamshire, shared by the violinist and teacher Rosemary Rapaport and Sir Thomas Armstrong, former Principal of the Royal Academy of Music. They were returned to the Academy in 2001 after restoration, and can now be seen in its museum on the Marylebone Road.”

I have attached the photo. The photo is attributed as follows:
“Portrait busts of great composers lying amidst rubble after the Queen’s Hall was hit by an incendiary bomb in 1941 (Photograph by Larkin Brothers Ltd., reproduced by kind permission of the Royal Academy of Music)”

'Mr. C. Wall of Chelsea' who was the 'sculptural contractor' may have been connected with the building contractor Charles Wall of Lots Road, Chelsea, of whom Grace's Guide notes mentions in 'The Engineer' between 1900 and 1915: https://www.gracesguide.co.uk/Charles_Wall

From 1909 Wall's were substructure contractors in the building of County Hall, London, so they sound more 'structural'.

Here is also an example of relief terracotta work on Mary Adelaide House, Paddington Green, by Elmes -the other name mentioned:

If it is strictly 'executants' being looked for then Elmes & Son -or at least their team - sound the more likely. Another man who did the sort of facade 'roundel' portraits in stone about this time as shown in the photo attached by Marcie was C. Raymond Smith. His examples of naval heroes (Drake, Nelson et al) are on the 1880s river facade of the Pepys Building at the Old Royal Naval College, Greenwich, but there, must have been others also doing such work and Elmes is the firm mentioned here.

Is it possible that the sculptor was the French sculptor Louis-Ernest Barrias (13 April 1841 – 4 February 1905)? According to Wikipedia, he was involved in the decoration of the Paris Opéra. He might have worked with the Parisian firm of Noel Quillet (see David’s comment).

He was known for a young Mozart sculpture (see link on ArtUK below). I imagine that a wealthy patron would have thought him the appropriate artist to produce sculptures of musicians for the Queen’s Hall.

I think his “Statue of Bossuet” from 1873, at the Sorbonne, has exactly the same cheeks. I have attached it for convenience but found it on this Wikipedia site.
https://en.wikipedia.org/wiki/List_of_works_by_Louis-Ernest_Barrias

I'm not sure that we are going to be able to take this discussion much further. But we should follow up the leads in the collection's introductory remarks. So here is “Mapping Sculpture” on Elmes:

An interesting image of the Queen's Hall's niche busts can be seen here:

I have attached some information from “The Builder” (February 14, 1891, and December 2, 1893) about the construction of Queen’s Hall. It might be helpful. https://tinyurl.com/2cmkhc8r

This discussion, “Can we clarify who sculpted the bust of Beethoven formerly on the edifice of Queen’s Hall, London?” has attracted eight contributions in the last two months. It concerns a bust of Beethoven which formed part of the exterior decoration of a concert hall, the Queen’s Hall, which was damaged in the Second World War. The busts can be seen on the façade of the hall in an old pre-war photograph identified by Kieran (11 September).

Marcie has kindly posted a page from “The Builder”, 2 December 1893, which states, “Messrs Sidney W. Elmes & Son executed the exterior carving”. “The Builder” is an authoritative source. This confirms the information in the first post in this discussions that the Elmes business was responsible for the carving.

As such, subject to other group leaders and the collection, I recommend that we close this discussion on the basis that Sidney W. Elmes & Son executed the bust and that it dates to 1893.

Presumably the same would apply to the RAM busts of Mozart, Bach and Haydn, which (on appearance only) seem to be from the same set but of so far 'unknown' authorship. This one also appears to be:

From the Survey of London listing provided by Kieran ('Bach, Beethoven, Haydn, Mozart, Purcell and Tchaikovsky'), elimination points to Purcell. I assume Tchaikovsky is now missing, at least from the RAM holding.

I have asked the Collection for their comments and acceptance of the Group Leader recommendation.

There’s an interesting program that was aired on Radio 3 in 2011 in the archives of the BBC (the Beethoven bust can just be seen to the right of the entrance). It discusses the history of the Queen’s hall from the beginning, to it’s destruction on May 10th 1941. During that time it had become the home of the British Broadcasting Company Symphony Orchestra and was also the place that the Proms first took place. It briefly also mentions the busts in an interview with the Curator of the Royal Academy of Music (approx 35 mins ). The facade was still standing, well into the 50’s as it was hoped that the venue would be rebuilt and the site was marked to be used for the same purpose as it was used before the war. Initially it was hoped for the festival of Britain in 1951. This did not happen, and permission was given for a hotel to be built on the site in 1959.
https://www.bbc.co.uk/sounds/play/b010nqnl

The bust of Henry Wood by Donald Gilbert that is seen every year in the Proms, was also a survivor of the incendiary bombing of the Queen’s Hall, which is in the collection of the Royal Academy of Music.
https://artuk.org/discover/artworks/sir-henry-wood-18691944-252789/view_as/grid/search/venue:royal-academy-of-music-6033--works_auto:henry-wood/page/1

There is also a Pathé News clip from 1942 with regards to the destruction of the Queen’s Hall. The clip is very much of it’s time.
https://www.britishpathe.com/video/londons-queens-hall/query/BBC+SYMPHONY+ORCHESTRA

Description
A bust of Ludwig van Beethoven, formerly on the edifice of the Queen's Hall, London. Head and shoulders in contemporary dress, with own hair, looking to the right. The work has a modern socle and is set on a plinth dating from the 1970s, decorated with an egg and dart cornice and laurel wreath on each of the four sides.