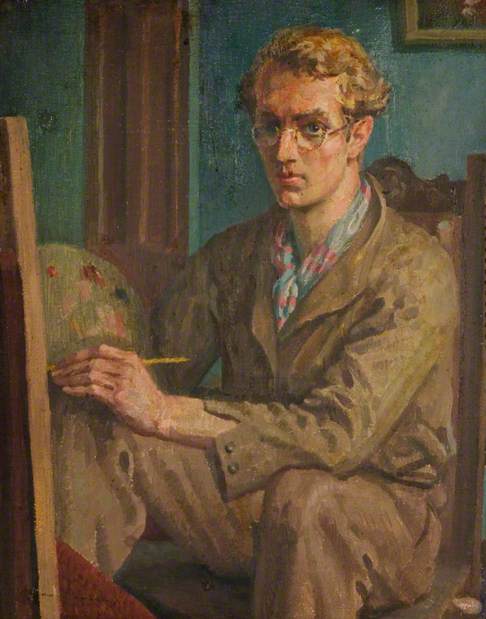 There is possibly a signature bottom left. Part of it may be a date 29 which could be the sitter's age.

The Collection has commented: 'There does seem to be some kind of deliberate marking on the edge of the canvas the artist is painting on, but it’s not terribly helpful. There is an exhibition label on the back, marked in blue crayon – 1937. Everything else is missing, with the appearance of perhaps having been torn off. On the picture itself, there’s a whitish area bottom right where a signature might have been, but possibly been removed. The Laing had open-entry "Artists of the Northern Counties" exhibitions at this period. The 1937 ANC exhibition included two Self Portraits in oil –

No 448 by Lyder R Simonsen (Gosforth, Newcastle address) (artist not included in Marshall Hall’s ‘Artists of Northumbria’)
No 440 by H. Thubron (Hartlepool address)

In 1937, Harry Thubron was at Sunderland School of Art, and was 22 years old. This portrait does resemble photographs of Thubron https://bit.ly/3uvIhTn. The sitter’s hair is parted on the opposite side to Thubron’s, which would fit with painting from an image reflected in a mirror. Scroll along the bottom to reach the photos of Thubron as a younger man.'

This discussion is now closed. We confirmed that this is a self portrait by Harry Thubron (1915–1985). It was made while he was a student at Sunderland School of Art and seems certain to be the work that he entered in the ‘Artists of the Northern Counties’ exhibition of 1937 at the Laing Art Gallery, Newcastle upon Tyne, as no. 440.

An informative review of a "rare one-man show" appeared in the Newcastle Journal of Thursday 30th September 1965 (attached). He had a two-person exhibition in the Serpentine gallery, with Prunella Clough, in 1976.

Born Henry James Thubron on 24th November 1915 and died in Lewisham, London on the 30th March 1985. He was buried or cremated at the Hither Green Cemetery and Crematorium in Lewisham.

I’d like to thank Bob Richmond and his friends Simon Gales and Mark Hudson for their impressions. They knew Thubron and his work when he was older. Mark Hudson has offered to ask a relative who knew Thubron in the Fifties. Their own comments are below.

‘There's something very close to him about the look in his eyes, this was my first impression. But I had no idea Harry painted as a young man, and definitely not like this, although nothing of course is beyond the realms of possibility, and it would have been way before my time … It does have Harry's look though... it's all in the eyes....’

‘As difficult as it is to see 'The Mace Bearer' (https://bit.ly/3gfzVuY) painting in detail, the handling of the paint to me looks very similar to that of the 'self portrait' and would suspect a similar date, Mace Bearer perhaps a tad later (a young man's early commission)? By 1950 … his brush work and direction (sparse landscape like early Pasmore) had changed by then and in a way that abstraction was definitely on the horizon. Signing works is always a question as to whether they want to be unmistakable as to the author of the work, or refrain from interfering with the imagery. I would suspect Harry from what I have heard, to be the latter. The lack of a signature could be also due to the possibility of it being an art school student's studio painting that was later submitted for an exhibition? None of this gives answers but could be pointers as to why?’

‘I first saw it fleetingly while rushing to do something else, but glancing at your message, then the pic, my immediate response was, YES! Have since slightly wound back from that complete conviction, but will explain as follows:
Sort/style of painting: Harry very much started out as a painter, and I dare say always thought of himself as a painter. He is what 18-20 (??) in this pic, meaning it was painted 1933-35? This is about exactly the sort of painting I’d have expected him to have been doing at this time judging by works by my father – a fellow student at Sunderland, if a few years younger.
Resemblance: I only met him when too young to remember. But comparing this with various photos – not least on your website* – it is very plausible. There is the long nose; the eyes and general expression feel right. I’m very slightly doubtful about the mouth, but then he’s young and the features are softer than of late. So the more I look the more I’m prepared to believe it.’

Thank you very much for the very interesting information re the possibility that this is a youthful Harry Thubron 'Self-Portrait'.

Please find attached a composite of this work and one of the photos from the link to an article on Harry Thubron by Bob Richmond provided at the top of this entry. The photo is credited to the collection of the National Arts Education Archive at Bretton Hall, Leeds. I flipped the photo, as per the suggestion. I agree that the sitter is Harry Thubron and that it must be a self-portrait.

That does seem quite compelling, thanks.

Thank you, Marcie, I think the likeness is compelling too. Let's wait to hear from Thubron's family and Mark Hudson's relative, who knew Thubron in the Fifties, assuming he can make contact. They're not on email, so please bear with us.

Many thanks again to Mark Hudson for showing this portrait to Harry Thubron's family. Their response: 'It is definitely Harry!!'

Particular thanks to Bob Richmond for responding in the first place and circulating my message among his generous group of friends.

That is great news. Thanks to Mark and Bob for getting it confirmed, and Marcie for the comparison picture.
I'll update the record.

This discussion has reached a most satisfactory conclusion. As long as Catherine (Group Leader for British 20th century portraits) is in agreement, I shall be happy to bring matters to a close with a formal recommendation.

Yes, happy for you to make the recommendation, Richard. Thanks.

With Catherine’s agreement, I am happy to close this discussion, formally recommending that the authorship of the self-portrait be recorded as Harry Thubron (1915-1985). As noted by Kieran, the artist was named at birth Henry James Thubron and perhaps this should be recorded at the head of the ArtUK biography.

The self-portrait is an impressive very early work by an artist now better known for his later abstractions. It seems that the painting was the self-portrait accepted for the open-entry ‘Artists of the Northern Counties’ exhibition of 1937 at the Laing Art Gallery, Newcastle upon Tyne, and catalogued as no. 440. This was an annual exhibition, with the precise month or months of showing varying from year to year. Thubron turned twenty-two on 24 November 1937, which means that his self-portrait must have been painted when he was still twenty-one – even if the show of 1937 was not held until the closing weeks of the year. At that time Thubron was a student at Sunderland School or College of Art, living in Hartlepool. Marshall Hall mentions this painting as the artist’s first exhibited work in ‘The Artists of Northumbria’ (revised and enlarged edition, Bristol 2005, p.341) without, of course, knowing its whereabouts.

As the picture was not officially recorded as part of the Laing Art Gallery’s collection until 1986, it seems possible, or even likely, that it had remained at the Gallery – in limbo – since 1937, not being retrieved by the artist at the close of the exhibition.

In reaching such a satisfactory conclusion we are grateful to have received, through Marion’s good offices, the valuable comments of Bob Richmond, Simon Gales and Mark Hudson, all of whom knew Thubron later in his career, and for the definitive response via Mark Hudson from the artist’s family. Thanks also to Marcie for the helpful composite.