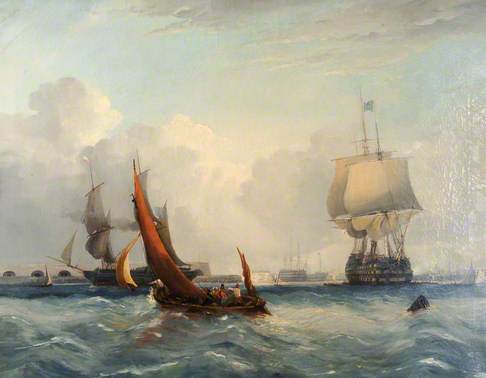 The Collection has commented: ‘We have never had a definite attribution of this painting (although Portsmouth was always suspected) so any help identifying the subject matter, and artist is appreciated. How can you be so sure that it is Victory in the distance?
A little research into the records shows that this painting was attributed to a G. Chambers. Can anyone offer an insight in Chambers as the potential artist?’

Pieter van der Merwe commented: ‘The three-decker in the distance has harbour (reduced) rig as the port guardship/ flagship and that is what 'Victory' was -still afloat- at Portsmouth from coming out of active service in c. 1818 (if I recall the date correctly) until going into its current dry dock at the turn of 1921-22 (though still the port flagship there). In practice you would find it very hard to find any view of Portsmouth in which 'Victory' was naturally 'in shot' -as here - which excluded it. This is probably a picture of 1820s-30s date but the hand eludes me, though a competent 2nd/3rd rank marine one: it looks a bit blue for one of the Knells and perhaps a bit early but that sort of thing. I think for the moment I'd change the title to 'Shipping off Portsmouth Harbour entrance.

That's an understandable old 'received attribution' but I doubt from the general painting manner that it is by either George Chambers senior or junior, and while more the former's sort of subject, not the latter's usual fare. I'd also now be a bit more cautious about identifying 'Victory' as the three-decker in the harbour though it probably is since she was there from 1819. The one coming out flies the flag of a vice-admiral of the blue at the fore.’

Almost certainly this is Portsmouth, the fortifications on the left of the painting would be Fort Blockhouse, would need to see a larger version of the image just to confirm.

The detail Art UK has supplied at the top shows it is unquestionably Fort Blockhouse, with the masts of what is almost certainly intended as 'Victory' inside the harbour now also much clearer. The foreground vessel (yawl-rigged) is also more clearly a passage-boat of some sort: a soldier or Marine with his wife(?) are among the passengers. The rig of the one it obscures is a little curious: basically that of a brig but with an unusual gaff-sail also on the foremast. The apparent paddle boxes and plume of smoke indicate it is in fact a steamer but where the funnel fits is not clear: it's also apparently Naval from the blue ensign.

I'm inclined to think the date is 1830s-plus rather than earlier and can understand a prior attribution to George Chambers junior (1829-78), though still doubt its correct.

'Shipping off Portsmouth Harbour entrance' would certainly be a better title.

Thank you for all the comments. I shall amend the title to 'Shipping off Portsmouth Harbour entrance' as suggested and add Fort Blockhouse to record subject matter. Portsmouth Museums if you would like to e-mail me at collections@hampshireculturaltrust.org.uk I will see if we have a better image.

Many thanks Winchester for that rapid resolution: we can leave this open for a while (especially if there is a better image, or another look finds other clues on it) to see if more hdway can be made on artist.

Is the work possibly by William Anderson (1757 – 1837)? I have attached two composites for ease of comparison:

From the 1stDibs website:
“18th century Dutch warships at sea off with fishing boats in full sail”
1780
https://tinyurl.com/28dhhtju
For the composite, I flipped the fishing boat in the 1stDibs image.

If this is Victory-and it does look like her-she is under sail. ! Hmn! After Trafalgar she was badly dammaged.Only restored to full seaworthyness in 1817-and then dry docked in 1822. And 1822 would just about fit with an early paddle steamer.The soldier in the sail boat looks like a regiment of foot chap -napolionic era. So -a short date range for this painting.
As to painter -it does look very like George Chamber's style.View of Portsmouth Harbour.
https://www.swangallery.co.uk/view-image.php?sid=baaaa32ccd9650870edf48675f576786&itemid=1001239

'Victory' is inside the harbour, Louis, not the ship coming out: I have also wondered about George Chambers junior (George William Crawford Chambers) but the palette looks too blue and handling rather different.

The one you link to, and its pair, on the Swan Gallery website are in my opinion also clearly George junior, not George senior (1803-40) as they claim. His style is much looser than his father's, with distinctive 'spidery' rigging. Nice examples though.

Er-looking at the two ships in harbour that I can see -neither looks like the Victory to me.The small one is too small .The bigger one looks like a later type.Sort of like HMS Britannia-ish - George Hyde Chambers painted her as well????

Description
A three-decker leaving Portsmouth Harbour with HMS 'Victory' centre-right distance and the Gosport-side battery, Fort Blockhouse, to the left behind the fishing boat and paddle steamer.