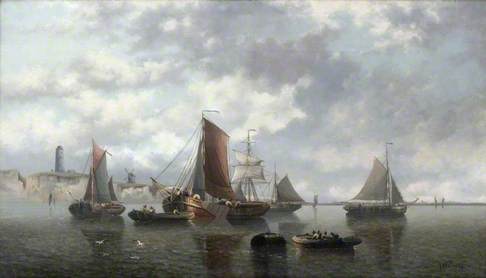 Flamborough Head has white cliffs and a round lighthouse, since the late 17th Century. Swift's 'Off Flamborough' is in Darlington Library (https://bit.ly/33of6qg)

The Collection has commented: 'It certainly looks possible that the scene depicts Flamborough. The old chalk lighthouse wasn't quite round, having angled sides, but it's not inconsistent with Swift's view. A windmill at Flamborough is listed on the Wikipedia 'List of windmills in the East Riding of Yorkshire' but with no further details. I will add the information to the picture record that this is a possible view of Flamborough Head and lighthouse.'

The only windmill at Flamborough was situated to the west of the village of Flamborough, so it would have not appeared to the right of the old lighthouse. Its location is shown in the planning document
http://www.flamboroughheadsac.org.uk/documents/Danes Dyke management plan.pdf

May I just make a few more observations? In researching dozens of images for my little book on the National Trust lighthouses I have never seen the like of this picture and it intrigues greatly. My first instinct is that this may be a purely imagined picture, which has several interesting aspects to it.

The lighthouse and indeed the windmill are distinctly odd.

On any measure the tower is far too close to the edge of the cliff to be Flamborough new light and definitely not the old. In any case, even if it was right, I suspect one would not see the entire light house from the point of view of the artist (head height over the water and about half a mile to a mile off). Surely the tower would be cut by the cliff?

The chances a windmill, a post mill at that, would survive in such a location must be suspect? And its sails are queer although I think there are examples of such in Holland.

Which brings us to the scene of vessels. What exactly is going on here? Two dutch fishing types with a boat, also dutch, and presumably belonging to one of them are in consort in very light airs with a small brigantine. The latter seems to be bringing up but rather untidily. Not an anchor in sight and the boat without oars.

The artist seems to know his vessels well and these oddities are strange particulalry since he has seen fit to name the larger dutch vessel (I cannot read it in the scan).

Description
This may show a view of Flamborough Head, Yorkshire.