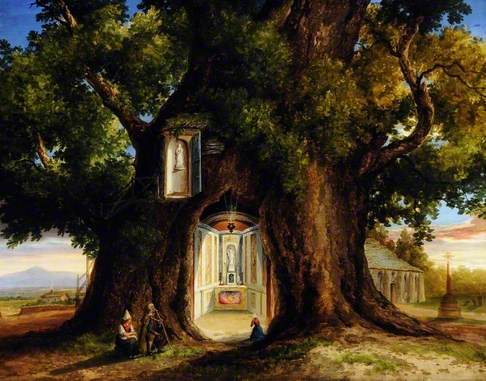 The artist exhibited ‘Le Chêne d’Allouville, Normandie’ at the British Institution in 1840 (1 ft 5 in x 2 ft 6in) as no. 89 . He also exhibited ‘Le Chêne d’Allonville, Normandie’ at the Royal Academy in 1839 as no. 237. The village of Allouville-Bellefosse is in the Pays de Caux east of the Seine not from Yvetot. The catalogue describes the subject ‘This oak is supposed to be 800 or 900 years old. The Chapel within the tree was erected by the Abbe de Detroit, Comte of Allouville in 1696. Over the chapel is a room called the Cell of the Hermit.’

Alistair Brown, Art UK added: 'Could Cowen have executed two versions as that at the British Institution is too small to be your painting [111 x 141.5cm]?’

It would appear the date currently given should be changed to c. 1839.

In 1886, a local newspaper published a print of a view of Sheffield from 1838, it was from the original painting by William Cowen. The article promoting the availability of the print, also presents a basic biography and mentions a few of the artistic achievements of William Cowen. The journalist cites the “Dictionary of Artists of the English School” by Redgrave and proceeds to point out what he believes are the discrepancies between what can be found in the dictionary entry, and the information that had been recorded in the personal artefacts of William Cowen.

“In all the pocket-books, note-books, and sketch-books which we have seen and examined, but do not possess, there has never come under our notice a reference in any form to Ireland, and we speak with greater certainty on this matter because we have gone through the collection of the artist’s relics with the especial object of ascertaining something affecting this statement”

The article goes on to reference a painting that was hanging in Rotherham Court House, and refers the corresponding information from William Cowen’s sketchbook.

“ There is a large and splendid example of his oil painting in the Rotherham Court House, presented by Earl Fitzwilliam (?), the “Chapel in the Oak, Alonville, Normandy.” Touching this picture the artist’s sketchbook has this reference to it - “Avis. Une notice de ce gros chêne contenant son age, ses dimensions, plusieurs anecdotes intéressant, alec une belle estampe, se trouve chez M. Patenotre, vis-à-vis de grande porte de l’Eglise.” “Over of the door of the chapel Norte Dame de la Paix. Note: My hotel at Rouen was Hotel de la Paix.” The picture was painted in 1837.
The Sheffield Daily Telegraph - November 30, 1886.

There is only a small period of time between 1886 and 1893. It is uncertain whether the painting from the Court House could have passed through the Mechanics Institute before being donated to the museum. Many artefacts were donated from the local area to Clifton Park Museum in 1893 as there was an ongoing effort, that had been widely publicised to open a museum in the area. The museum was opened in July of that year. The painting from the Court House of the “Chapel in the Oak, Alonville, Normandy” was painted in 1837.

The measurements given for British Institution exhibits at that time included the frame -- so the work shown there in 1840 was even smaller than the dimensions quoted above imply. It was perhaps a preparatory work for the RA exhibit of 1839 later developed into something saleable.

To answer the main question, yes, William Cowen appears to have painted (at least) two versions of the subject.

So we currently have, two distinct works, and two distinct written references, from earliest to latest (and with decimal dimensions for easier comparisons)

FINE ARTS. BRITISH INSTITUTION (Second notice) (1840). Court and Lady's Magazine, Monthly Critic and Museum, 18, 336-346.
pp. 337-338:
'[...] the Chêne d'Allouville, Normandie, No. 89, by W. Cowen. The execution is in many parts very good, and the scene truthful. We seem actually to see "this oak which is supposed to be 800 or 900 years old." The chapel (on the right-hand side) within the tree, was erected by the Abbé du Détroit, curate of Allouville, in 1696. Over the chapel is a room called the cell of the hermit" But why has not W. Cowen illustrated the scene by some figure connected with some interesting anecdote, the circumstances of which transpired near the Chêne? On that spot many military facts, for example, and others of various kind, /p. 338/ have occurred, all which offer material for imparting interest to the simple sketch of a rural scene. The present is an epoch in which such drawings do not afford much satisfaction, unless they contain in themselves something of greater fullness of meaning; and by many painters this appears frequently to be entirely forgotten.'

Both the absence of figures and the physical description of 'the chapel (on the right-hand side)' of the composition match the triptych arrangement of the Chatsworth version; so that would mean Chatsworth = B.I.. However dimensions don't quite match; the H.x W. ratio of the B.I work is 1:1.77, the overall H.x W. ratio of the three panels of the Chatsworth work side-by-side without framing is 1:2.55. How reliable are B.I. dimensions usually?

Title
The Chapel in the Oak

Acquisition method
gift from the Committee of the Mechanics Institute, 1893