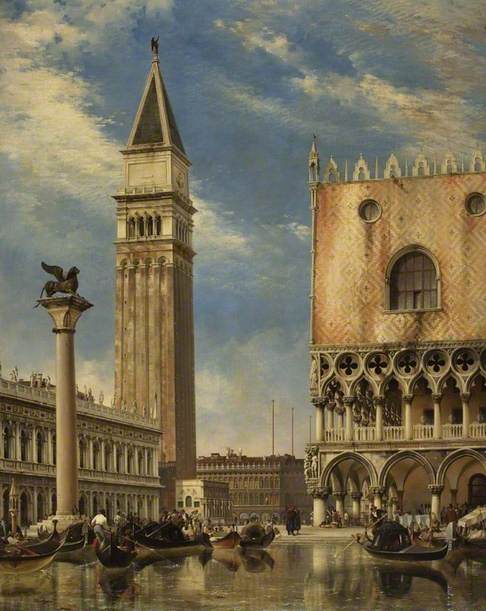 Samuel Christy MP owned at least 3 Cooke paintings of Venice, but his picture of this subject was horizontal and much larger. It was exhibited at the Royal Academy in 1852 no 405. However, this painting could be that owned by Mrs Christie Miller 51 x 40 in, which Munday [John Munday, Edward William Cooke ..., Woodbridge, 1996] dates to 1852 [p.347] The Christie Millers seem to be a West Country family. Cooke painted Venice many times between 1850 and 1879. It could be a painting of the mid 1850s, but one should bear in mind that he sometimes repeated his subjects.

I’m struck by how much it looks like this smaller painting by Cooke, which looks like the newer of the two paintings:
“The Piazzetta, Venice
Edward William Cooke (1811–1880)
1860
Aberdeen Art Gallery & Museums”
https://artuk.org/discover/artworks/the-piazzetta-venice-106789