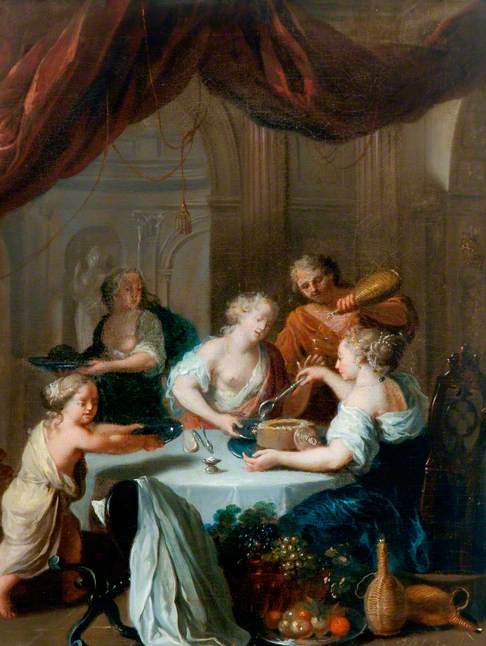 This is a classical interior with figures dressed in classical or antique fashion. The picture may well be by a Flemish artist, or Flemish School.

The Collection has commented: 'We’ve taken a closer look at the signature … it looks more to us like g. d Laireffe/Lairesse.'

The contributor has added: 'That signature would appear to refer to Gérard de Lairesse (1641-1711), an important Dutch painter in his day, but this picture is not good enough to be by his hand. Actually, the first letter of the signature may be a J, not a G, which could fit Jan de Lairesse (1673-1716), though I have seen somewhat different dates for him. He was the son of Gérard de Lairesse and much influenced by his father's work, albeit considered a minor and much lesser figure. Gérard de Lairesse was much given to classical imagery, but typically more grand than this picture. His son, however, may well have had more modest tendencies. Gérard de Lairesse had two brothers who were painters, Jacques (1645–1690) and Jan Gérard (1651–1724). The former was apparently largely a studio assistant for his famous brother and no independent works by him are known, but the latter produced works on his own.

Thus, we have more than one candidate for J. de Lairesse. Since they were all in the orbit of Gérard de Lairesse and influenced by his work, it may prove very difficult if not impossible to settle on a specific attribution, barring input from a Dutch specialist. However, "circle of Gérard de Lairesse" seems plausible.’

The current title is not really apt, since it suggests a contemporary domestic Flemish interior and the picture depicts a clearly classical or antique setting with figures in classical-type dress. I would suggest something like "Classical Interior with Figures Dining.'

Gérard de Lairesse was once known as the Dutch Poussin, which gives an idea of his style. He was disfigured by congenital syphilis, but still had a highly successful career until he went blind. Rembrandt painted his portrait. As I said, this picture is not up to his level, but it could be by a related painter in his family circle.

There appears to be a lot of barking up wrong trees here, due to a signature that, judging from the photos, is apocryphal. A proper candidate might be Ottmar Elliger II (https://rkd.nl/explore/artists/26011), but the photo online is not good enough to allow proper judgment.

presumaby Elliger II 1666-1735
There is an Augsburg thesis by Carmen Roll, 2003
and there is a little confusion in Saur's dictionary between him and Elliger III

The Ashmolean has a still life by Elliger I

Elliger the Younger (II) was a pupil of Gérard de Lairesse. His Artnet page is below:

Is it possible to see a higher-resolution image of our picture? I suppose it would be reasonable to go with follower or circle of Gérard de Lairesse, barring a more exact attribution.

Jacinto, I can provide two close-up details from the best image we have, if that helps. David

Elliger the Elder was a still life specialist. Presumably, he trained his son in that field, although the younger Elliger had other teachers and greater ambitions, so he specialised in mythological and historical subjects. I have seen some very accomplished still lifes attributed to Elliger II, but I suspect at least some of them were really by his father. I mention all of this because the still life elements in this picture are not the work of someone skilled in that genre.

Can the link to the NICE Paintings entry be restored?

The still-life elements, lower right, are static in composition and laboured in execution, lacking the dynamic character of the rest of the picture. They were surely painted by a second hand.

The link to the NICE record has now been restored and should be available soon.

Elliger's wife Christina Houbraken born 1695 was also a painter, but no work of hers is known today
His father, Ottomar Ellger I died 1679, of course was a specialist still lfe painter
- he could have had assistants who may have worked with the son

In case it is of any help, attached is a manipulated image of the inscription lower right.

you should show it to Fred Meijer

Fred has already commented (10/09/21) that he thinks the signature is 'apocryphal' and suggested that Elliger II was stylistically closer. Has anybody got a better idea for a title other than Classical Interior with allegorical scene? There seems to be a lot of transferring of liquids going on whether wine, water or soup?

I suggest "Classical Scene with Figures Dining." I do not think this is an allegorical subject. As to attribution, "follower of Gérard de Lairesse" seems reasonable, since that is what Elliger II was, although "style of Ottmar Elliger II" is another option for the collection to consider.

Perhaps illustrating the sense of taste (and thus possibly from a series of five pictures). Compare this later treatment of the subject by Mercier:

I would choose a more descriptive title, such as “Classical Scene with Two Ladies and a Young Girl Dining, Assisted by Two Servants”.

You might find this work by the French artist François Boucher (1703-1770) to be interesting.

“Noblewoman with Child and Dog”
https://tinyurl.com/z2mb9y7

The gentleman has a very similar face, orange clothing, and posture. The lady has highly dressed hair, as does the lady on the right in the Art UK work. And, she is half-dressed, like the lady in the centre of the Art UK work. Each work includes a young girl. I think the depiction of the draped cloth at the top of each work is quite similar.

I thought the painting was at the New Orleans Museum of Art because it was part of an exhibition in 2009 (https://tinyurl.com/3fcxtsa3) but I could not find it in the online collection. The image is from the Isaproject website. I think it includes a cat, not a dog. I have attached a composite for ease of comparison.

Marcie, our work is both earlier and rather less fluent than Boucher, in whose subject pictures most females are half-dressed. In our picture, which does not look at all French, the dress refers more to the classical period also denoted by the background (though Boucher certainly used the classical/mythological excuse as pretext for nudity)