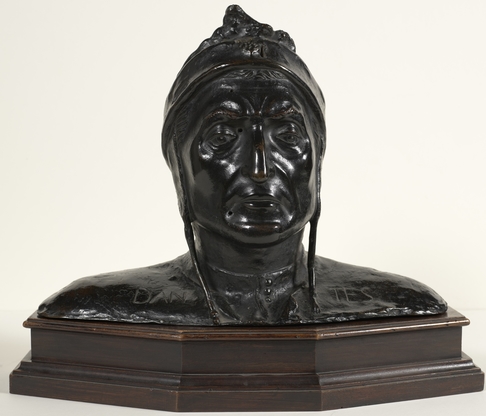 Can we find out more about the sculptor? He was working in Naples in the late 19th Century.

This is Sculpture Bust of Caesar Augustus

The artist was from Naples and exhibited in the metalwork section of the 'The Italian Exhibition' in London in 1888:

"In the mid-nineteenth century Salvatore Errico, sculptor and antiquarian, had a foundry where valuable bronze works were carried out. At the behest of his will, on his death, the plaster casts were destroyed..."

The 1886 exhibition catalogue for the 'Oggetti Artistici di Metal...', specifically mentions the artist's "Bronze head: Dante Alighieri; imitation from the ancient." (See attached). This is possibly the same work as is in the John Rylands' collection (which is, unquestionably, a bust of Dante).

An advertisement (attached) for his workshop and foundry in Naples appeared in the 'Annuario d'Italia, Calendario Generale del Regno' of 1893.

1886 (if it is accepted that this is the same work as catalogued in the 'Oggetti Artistici di Metal...' mentioned above.)

A clearer version of that advertisement is attached.

Another version of the same bust is here:

Many versions of this bust exist; it was evidently a popular piece. The original was presumably a medieval or Renaissance bust, perhaps derived from Dante's death mask:

Another example, at Sudbury Hall, was produced by the Naples firm of Sabatino de Angelis:

That raises the question of where such an earlier original may be (or have been if no longer extant). Is it not more likely to be a 19th-century piece -whether by Errico as sculptor or not - multiplied as casts by him and others? If the de Angelis one at Sudbury is secondary I'm a bit surprised. It will certainly be there because the second son of the 5th Lord Vernon (the Hon. William John Borlase-Warren-Venables-Vernon, 1834-1919) was a great Dante scholar and much of his library is still in the house. I'd have thought it more likely he would have had a 'prime' version.

Pieter, the Sabatino de Angelis firm was apparently a purely reproductive business, largely though not exclusively focused on antiquities from the National Museum in Naples.

I expect this is the bronze bust of Dante shown by Errico at the 1886 exhibition and explicitly said to be after or derived from a much older original, and since a different Naples firm produced the same bust, it would not have been created by Errico (although the latter listed himself as both a sculptor of original works and a copyist of antiquities from the National Museum and various archaelogical excavations).

As best I can find, the bust is based on the supposed death mask in Florence, which may not be a death mask but a fragment from a now lost sepulchral effigy:

Here is a close up of the "mask" in Florence (note that the eyes are not closed):

Alfonso Panzetta, in the most comprehensive study of Italian 19th C. sculpture available (2003), provides little information about Errico. No certain dates. He describes him as having a foundry, and as the author of small animal bronzes and exhibitor of two works at the National Exhibition of Bologna in 1888. Probably the information given by the director of the current family website, mentioned by Jacinto Regalado, is the most up-to-date.
Errico exhibited in Bologna in 1888: Piccolo marinaio (a bronze head) and Dopo il pasto (bronze); in Florence in 1889, he exhibited four works: Vittorio (135 lire); Psiche (35 lire. Received an award at the Exhibition in Paris); Dante (35 lire); Battente pompeiano (a door from Pompei. 17 lire, likewise awarded a prize in Paris); another sculpture of the same title, probably a second copy of the foregoing.
I think Errico was more a craftsman than an artist. A lot of similar craftsmen were involved in a brisk trade of replicas of the antique made for the tourist trade, of which even Alma Tadema availed himself. In the Italian Exhibition of 1888, he is listed more as a manufacturer of "metal work" than as a sculptor in his own right. This head of Dante may be indeed be identified as the one exhibited in the 1886 exhibition (that depends on the documentation) but I think it could be just one copy of a series. Sculptors at Errico's level would often present a model at a public exhibition and then execute a number of bronze casts to satisfy commissions received.

Jacinto's link says that the plaster on offer is from:

which suggests it is a copy of a much earlier work currently in Naples that was itself based on the 'death mask'. I can't find any images of this, but the resemblance between that, the Errico ones and the de Angelis ones (here's another copy: https://bit.ly/3op4yAP) make it seem likely that these are high-end touristware, both then and today based on a medieval original in Naples.

Here is the V&A's version (maker unspecified), which is "a reproduction from the bronze original in the Museo Nazionale at Naples, said to have been made from a cast taken after death":

It makes sense that the copies made by Errico, Sabatino de Angelis and probably other producers in Naples were casts of a work in the Museo Nazionale there, which may have come from the Palazzo Farnese in Rome (see below):

As for Errico, I'm sure his chief business was selling copies of antiquities or famous sculptures, not original works, though he was apparently a sculptor. This Dante bust, however, is clearly a copy.

Dated to the 16th century, this could be the original, which is in the collection of the Museo di Capodimonte in Naples:

Dated to the 16th century and acknowledged as being from the Farnese collection, this could be the original, which is in the collection of the Museo di Capodimonte in Naples:

Yes, that all fits: Farnese provenance, Renaissance bust, Naples museum collection. It is obviously the same bust as ours, including the inscription in front. Perhaps at one point it was in the National Museum, which is really for antiquities, and may have been given or transferred to another local venue.

This might be an original work by Errico, possibly his Psyche (click on "View details" next to the small image for the full listing):

See attached, which adds a bit more on exhibition details: one could clearly chase more through catalogues but does this need to go any further?

Pieter, I would use "Dante's purported death mask," since it is not definitely established that it represents a death mask as opposed to a fragment from a funerary monument.

Also, in the first line of the second paragraph, it should be "he (not his) mainly appears..."

OK: thanks and apologies for the typo.

Description
Dante is considered to be Italy’s greatest poet, and one of the greatest European poets for his contribution to world literature. His best known work is the epic poem 'The Divine Comedy'.