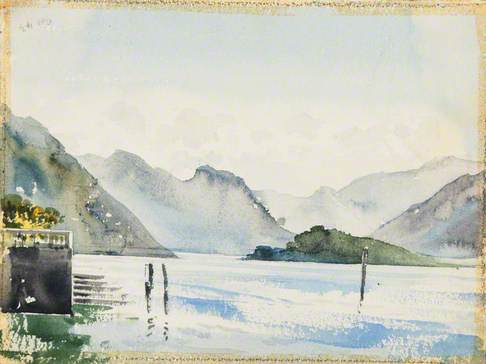 This discussion is now closed. A note has been added to the artwork description: ‘This is a view from Bellagio looking along the south-western branch of Lake Como, the artist's apparent position being the shore below what is now the Grand Hotel Villa Serbelloni’.

I have just removed two posts advertising watercolours commercially. Any repeated posting of commercial material will lead to any individual's Art Detective account being deleted.

Looking especially at the photograph in Guillaume Everard's second attachment of 13/07/2021, I am convinced that this is a view from Bellagio looking along the south-western branch of Lake Como; also that the conspicuous promontory in the middle distance is part of the town of Tremezzina with the Villa Balbianello etc. Admittedly, a degree of artistic licence is evident in the scale of the surrounding mountains. I agree that the possible viewpoint is below what is now the Grand Hotel Villa Serbelloni (where perhaps Adrian Bury stayed?).

Here is a link to Giacometti’s ‘Fog over Lake Como’ on the Arthive website. https://tinyurl.com/2p8ebmtm

Thanks, Marcie, for that helpful find which, I suggest, just about clinches the matter!

There appears to be consensus that the answer to this question is Lake Como from Bellagio, with very helpful confirmatory images from Pieter, Guillaume and Marcie and biographical details from Kenneth putting the artist in the Italian lakes. Perhaps it has missed its sign off because of of the original attribution of an English subject?

Just to support Alison, above, that the location has been satisfactorily resolved so the discussion could now close.

Adapting Richard Green's summary of 06/02/2022 12:59 a brief description could be: 'A view from Bellagio looking along the south-western branch of Lake Como, the artist's apparent position being the shorel below what is now the Grand Hotel Villa Serbelloni.'

Pieter, many thanks, I am emailing the Society's Honorary Curator to confirm their acceptance of this recommendation. Regards, David

Pieter, the Collection have replied: 'Thanks for this, and yes, of course please add the correct description as is suggested'. David

Description
This is a view from Bellagio looking along the south-western branch of Lake Como, the artist's apparent position being the shore below what is now the Grand Hotel Villa Serbelloni. Verso of a sheet on which Bury later did a view of fields thought to be near Pulborough, Sussex.