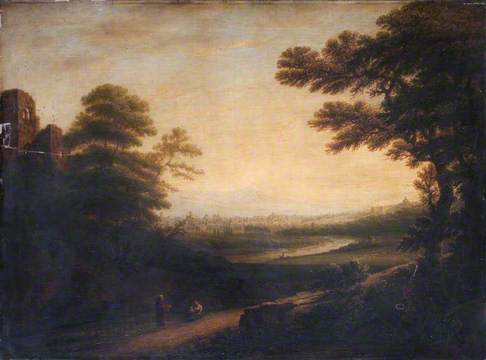 1783 is the date of its presentation as a diploma picture. It could have been painted a lot earlier, for Garvey exhibited two distant views of Rome at the Society of Artists in 1769. Those familiar with the approaches to Rome could tell whether this is one of these – either no 127 A view of Rome from the Florence Road or no 128 A view from Albano towards Rome.

The Collection has commented: 'It is the case that 1783 was the date this work was presented as a Diploma Work by Garvey to the Academy. It is likely it was painted before this date, after Garvey’s travel to Rome in the late 1760s. However, he produced many views of Rome, not just in situ, but on his return to England – probably from studies made in Italy but also based on other landscape works he had at his disposal. So this work could possibly date from 1768-9, but could also date from any time in the 1770s. The only certainty is that it was finished before 1783, the year it was presented to the Academy. Happy for a public discussion to be opened if it might lead to more information.'

Garvey is a difficult artist to date - his technique can be variable, but generally hardly changes across his career. This would be typical of the time he was elected RA (when a critic described him as a 'miserable mushroom'), to the astonishment of many others. I think you might find various views of Rome among his numerous RA exhibits, and there are several among the pictures by him hanging in darkened corners of country houses. My own records and files mostly concern Garveys wrongly reattributed to Marlow, but they are locked down in the university, and I am currently hors de combat u ndergoing not very nice chemo-therapy, so will not be able to look at the records until autumn.

Thank you for those dates. I'd be inclined to take the later, c1783, as he 'feathering' technique for the leaves of the trees is more like EG's later style: his earlier, denser handling can be found in the paintings he did for Parker at Saltram in 1770s. Also, I imagine a diploma work would be around the time he became a full Academician.

It is such sad news that Michael Liversidge died on 5th July 2021.

I'm grateful to Sheena Stoddard for informing us and for this link to the University of Bristol's obituary. https://bit.ly/3mNDgp1