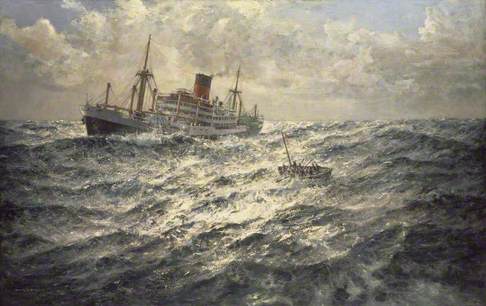 In checking some details on works by the Australian-born artist Arthur Burgess, I have noticed that we lack a full overview. I have not looked for specific press or magazine obituaries, but the attached working draft was fairly easily assembled (the Cornwall artists link at the bottom being notably useful). I don't have direct access to ‘Ancestry’ etc and standard 'British Artist' dictionaries at home, so if anyone who does would care to fill in some of the gaps indicated, or add further exhibition/publication data, that would be useful.

I think the National Maritime Museum bought this painting directly from him (TBC) and Teddy Archibald – as quoted – told me that the one thing he remembered from their conversation at the time was his regret that success had come too late for him to enjoy. Why that should have been so is not clear. He was in the same class as people like Norman Wilkinson, Charles Pears and Montague Dawson – though not as wide-ranging as the first two, who did much more advertising work for shipping and railway companies etc., and not all 'marine' – so perhaps not so much of a 'self-marketer' in the way he operated, but I only guess.

This discussion is now closed. Pieter van der Merwe’s new artist biography will now be reviewed with the Editorial team and then incorporated on to the Art UK site.
Thank you to everyone who contributed to the discussion. To anyone viewing this discussion for the first time, please see below for all the comments that led to this conclusion.

Burgess's grandson is around and knows a lot about his grandfather and his works. I will forward this to him and he can respond. His name is Stephen Bartley.

Thanks Jamie: he can reach me via the NMM/RMG email address (which I think you have) if he'd rather do it that way. Final outcome in summary terms will come back here.

I have just scanned the British Library Newspaper collection online where there are many (more than 100) references always under A. J. W. Burgess. He comes out as an illustrator, painter and he was also contributor to at least one book on fishing, always highly regarded. An exhibition of works was shown at Hartlepool on his death.

Pieter - Stephen will e-mail you separately at some point shortly if that is ok.

Thanks: will keep weather eye lifting.

Although I'm afraid I can add no more to Burgess' known biographical details than, it would seem, can anyone else - other perhaps than his grandson via your email address, Pieter?- I feel it worth drawing attention to the coverage that Burgess, more than any other artist, would appear to have given to the Clyde Anchorage Emergency Port devised and operated for the Ministry of War Transport during World War II by the prominent London-based stevedoring company, Scruttons Ltd. Whether this was in his capacity as an official war artist or simply on commission from Scruttons I don't know, but six such paintings, some of which I have no recollection of ever having seen illustrated elsewhere, are reproduced in monochrome in 'The History of Scruttons', written by a former Director of the company, A.E. Jeffery, and published by Scruttons themselves, for private circulation only, in 1970. Of those six, one is the view of Craigendoran Pier, with the ocean-going ships in the anchorage out towards Gourock, which is listed by Art UK as being now in the Scottish Maritime Museum; two - respectively of STRATHEDEN discharging cargo into coasters and lighters alongside and of AQUITANIA and QUEEN MARY at anchor at the Tail o' the Bank - are now among the seven portraits by Burgess in my Original Collection, while that of the torpedo-crippled ORARI lying in the Holy Loch was purchased at auction by a late friend of mine, himself a former Master with the New Zealand Shipping Co., and later presented, I believe, to a descendant of the Captain Rice by whose outstanding seamanship ORARI was brought home. And of course some or all of the portraits of Royal Naval warships included among the total of 32 paintings by Burgess registered with Art UK - in particular perhaps those of HMS ARK ROYAL and PRINCE OF WALES - may also have been executed in the Emergency Port. I can think of no other artist who concerned himself so extensively with that vital yet today scarcely remembered resource.

Thanks for that Michael: I have received information from Burgess's grandson, via Art UK, but have yet to incorporate it here. He is also aiming to put something online himself in the next few months so things will be better covered in due course.

I heard from Burgess's grandson, Stephen Bartley, some time ago and he has kindly supplied further details and corrections to my draft on the former - possibly with a few more to come (esp. on exhibition details) when he can get at stored paperwork. With that caution I add here an updated version, with a couple of external links that were useful still attached at the bottom.

Just in case anyone has anything further to thrown in I will hold off recommending closure here for another week, minimum, but I think the ground originally intended is now adequately covered for Art UK purposes.

Despite spending most of his adult life in England, Burgess counts as a significant Australian marine painter on the same level as Norman Wilkinson, Charles Pears 'et al' doing the same class of work. He really ought to be in the Australian Dictionary of Biography and the fact that he isn't is probably because it has overlooked him owing to his early departure, with ODNB perhaps also doing so because Australia has first call in the matter.

Pieter, thank you for the second draft of the biography.

I have also filed it offline (including the Hartlepool correction) in the NMM database record for BHC1534, which is numerically the first of the NMM's Burgess, oils cross-ref'd to this discussion as source. I'll update if anything further appears (at least in the short term!)

Having held off nearer two weeks than one from my notice to close this of 20 August, I think we could now do so. Many thanks again to those who have contributed.

Pieter, thanks. I have forwarded the biographical draft to the Collection and confirm that they are happy for the discussion to now close. David

The Collection has commented: 'Yes, please go ahead and close the discussion. We will add the biographical outline to our internal paintings files as it will indeed be useful for future research/interpretation.'

Title
The Brotherhood of Seamen

Description
Although the rescue incident shown in this painting is fictitious, the ship, 'Glengyle', was real and was a cargo liner built for the Glen Line in 1939. 'Glengyle' was the fifth to bear the name and was built by the Caledon Ship Building & Dry-Dock Co., at Dundee. On delivery she was taken over by the Admiralty and converted into a fast supply ship, flying the white ensign as HMS 'Glengyle'. In April 1940 she was converted into a Landing Ship Infantry capable of carrying 700 troops and was commissioned on 10th September of that year. For this role she was also equipped with a naval bridge, six 4-inch guns in twin mountings and 22 landing craft. In 1943, in company with the 'Monarch of Bermuda' and four other transports, she was present at the Sicily landing at Pachino, Operation Husky, and served as Montgomery's headquarters. The painting depicts a drama which did not take place but is intended as a parable, since the vulnerability of a small boat in such a heavy swell parallels the frailty and vulnerability of man confronted with the forces of nature or war. Burgess was an Australian artist, who trained there and came to England in 1901. He exhibited at the Royal Academy from 1904, worked as an illustrator for the Australian government in the First World War and as an official war artist to its successor, 1939–1945.