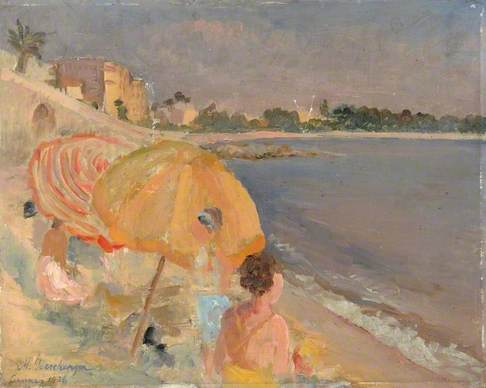 A detail of the signature is attached, unavailable to the contributor at the time of the comment. The Collection have added that there are no labels or inscriptions on the back of the painting.

The signature appears to be M. Guerchenzon, although the first letter of the surname is uncertain. Guerchenzon or Gerchenzon is apparently a Jewish surname.

Tim, Michel Gherchenzone was born in 1938.

However, there could be a family connection.

Michel Gherchenzone was born on 31st August, 1907. He studied at the Ecole des Beaux Arts and in Chișinău. He had a solo exhibition at the Free French Club, Paris in 1966 and was included in Salon des Independants exhibitions.

See International Who's who in Art and Antiques, 1976.

*Ecole des Beaux Arts, Chișinău (he was from there and at that time Moldova was part of the Romanian Kingdom)

The second letter of the surname in the signature, however, is not h but u, and there is no final e. I suppose, however, the spelling may have been changed later.

But he may have used Michel professionally. The (1938) that comes up in searches, may be a reference to a relative (son?) actually called Michel, so as to distinguish the two.

"Bess"is of course Bessarabia and Kishinev is now called Chișinău.

It may have been to distinguish himself from Mikhail Gershenzon the Russian writer. (Michel's Christian name would've almost certainly been Mikhail too, though Francocized on moving to France.

The Russian Mikhail Gershenzon also has multiple spellings of his surname.

Tim I'm pretty sure that his birth name must have been Moïse and that must have been what was on his documents. If you've just been captured by the Nazis in 1940, you're not going to use such an obviously Jewish name if you can get away with Michel - even if you may have been using that informally anyway. He would have been born under Russian rule and might have used Mikhail as a child (especially given the anti-Jewish pogroms in 1903 and 1905), but Chișinău was part of Romania from 1918 onwards.

Being born under Russian rule would also explain the variants of the surname as different Romanisations of Cyrillic were used on it. As Wiki rather plaintively remarks "There are a number of distinct and competing standards for the Romanization of Russian Cyrillic, with none of them having received much popularity and in reality transliteration is often carried out without any uniform standards". The same applies to his Russian near-namesake of course, though he died in 1925 and so I doubt there would have been much confusion between them.

The Michel Gherchenzone born in 1938 clearly used that spelling (see signature on https://bit.ly/3tdi4sb) and your earlier 1976 reference suggests the other one had standardised it to that as well by then. The latter clearly survived the war - his exhibition at the Free French Club suggests with some military participation - and I found an indirect reference to a marriage in 1949 or so in Nice in a Florida paper (https://bit.ly/3eGbCV6).

I do not believe there is a Michel Gherchenzone born in 1938 - usually these spurious dates appear on artprice websites due to a cataloguing and transcribing error. The artist of the painting on the auction.fr website is the same artist as the painting here, despite the different spelling of the surname. The signature is the same hand.

That's very possible though I did find another sale saying specifically "né en 1938":

which does seen to be in a slightly different style. No images of the signatures, so can't really compare. But as you say misinformation gets copied from site to site without checking.

It's not unknown for sons (say) to be influenced by fathers, which would explain the similarity. But I mainly assume there are two different ones because putting a date qualifier after the name doesn't seem to be normal practice and suggests they are trying to distinguish two different artists.

The signature is fairly clearly 'Guerchenzon' -probably as French ( a hard 'Gh' to a hard 'Gu') as the shift from Moise/Mikhail to Michel: a death date would be useful if discoverable, presumably post 1976 unless only very shortly before.