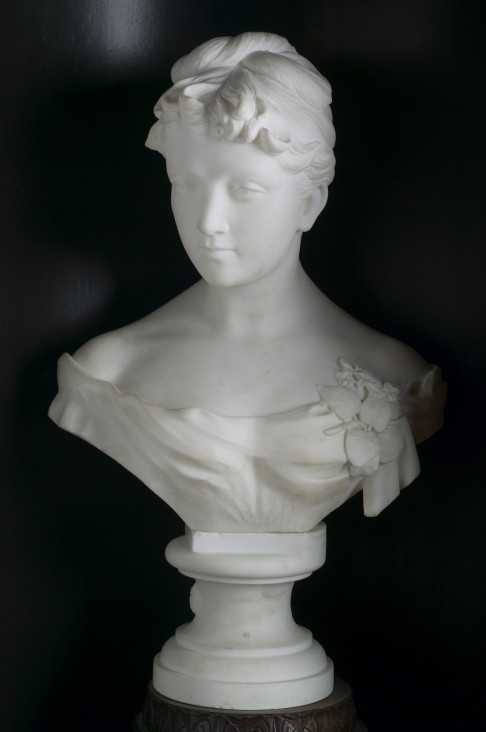 A previous discussion about the artist produced much interesting new information about her life and work. After that discussion closed, thanks to Linda Whiteley’s interest and involvement, Laure de Margerie kindly sent a photograph of the catalogue entry which is reproduced in Pierre Sanchez, ‘Dictionnaire de l’Union des femmes peintres et sculpteurs’ (2010) (attached). Laure included Chantal Beauvalot’s Introduction, which is very interesting about the rights of women artists, and Sanchez’s ‘Avertissements’ and ‘Remerciements’, in which he explains how he created the dictionary, tracking down all the catalogues of the exhibitions that he could find (72 in all), with the contents of 10 missing years discerned through press reports and other art criticism.

Can the sitter be identified from memoirs or the local press of the period? Linda Whiteley has mentioned a society gossip in Nice in the ‘Monde Elégant’, where one of the contributors was for a number of years the Baron de Nervo, who apparently knew everyone, but unfortunately there appears to be no one with the initial ‘L’ in his family until his son Léon, who only married in 1897.

A low-relief crowned monogram on the socle (images attached, with thanks to the collection) was considered in the previous discussion. Group Leader Katharine Eustace had her doubts about the marriage of bust and socle, and Osmund Bullock concluded that they were most likely mismatched.

That's a useful advance including on 'Mme Devenisch-Walsche' as pupil of Helene Bertaux (1825-1909) : see

It also suggests she learnt in France with Bertaux, probably in the 1860s at earliest unless having earlier but unknown English training.

The French verse quoted by Sanchez does not appear on a Google search, so is not some well-known piece.

In 'La Vie Mondaine - Journal of High-Life', of the 7th February 1889, the following appeared in a review of the sculpture section of the Salon of that year:

"The graceful no. 450. Mrs. Devenish Walshe in her 'Saint Christopher' - terracotta bas-relief - has overcome the difficulty and happily conquered it; by the same artist, the portrait of Joy, a cute little dog that belonged to Princess Lucie Dolgorouki."

Could it please be accepted that she is likely to have been a good artist completely in her own right?

As this bust has now been identified as "Lilas Blanc (Portrait de Mme la baronne L. de N)" the crowned monogram on the socle, with its dominant letter N, seems more likely to be associated directly with the sitter. A question remains as to why it was not in the possession of the sitter or her family but was in that of the artist's relation, Miss Lautour, in 1928.

There could be more than one versions of this

The collection has confirmed that the socle is not meant to be with that bust.

Concerning the positioning of the bust on the socle, they regularly clean their displays and when our photograph was taken it had not been put back the right way round (it was an existing photo that passed muster to be used on the site). It is now back in the correct position and although it fits better, it is clear that it is not meant to be with the bust. They will send us a new photograph.

Well, the socle certainly doesn't fit in the normal and full sense**. But if we're saying it's just 'associated' (i.e. the bust was placed on it much later, and their origins are unconnected), it's a remarkable coincidence that the carved monogram on it has 'N' as the dominant letter and is surmounted by the coronet of a baron(ess) of various European nations (though not France) - these are both consistent with the abbreviated identity of the sitter given in the catalogue. It is not a problem that she is described as 'baronne' - it was very common at this time in social contexts to translate a foreign title into its local equivalent.

**Could the Collection tell us if the bust has an attachment of any kind to the socle - a locating lug or other projection that fits into the base, for example - or does it just sit freely on top of it?

I'd like to thank the Curator at the collection for these new images showing the bust's current position on the socle.

Despite the different marble colouration it still looks a moot point as to whether the socle was intended for the bust or not. Suppose, for example, if it was originally exibited without one and this was a 'domestic addition' afterwards, with the correct baronially crowned monogram. Is the matter really so clear as to say definitely not?

In that last photo just posted by Marion, the face looks generalized and mask-like, and both the hair and the drapery look relatively basic or workmanlike. It is all competent enough, but the right lighting seems to be rather critical.

Despite generic 'society beauty' appearance, the Sanchez record of another portrait by Gertrude in the 1891 show ('la comtesse L.R...') seems to suggest they are that.

This qualifies as what was known as "scultura da salotto," of which there was a very great deal in the 19th century.

Were any of the vast number of commissioned busts of the great and the good that feature in the records of the Royal Academy or elsewhere any different? Thousands of these were destined for living rooms, albeit many of the grand design and scale of their elegant Georgian and Victorian architecture. Outside of this having been ghosted by some professional artisan or artist, it continues to amaze me that there is a resistance to accepting that it is a fine bust made by a talented sculptor, probably executed to satisfactorily compliment or memorialise the sitter rather than attempt to achieve some higher bar of artistic quality.

In the Piere Sanchez- the first entry for Gertrude is a study of a Horse. Kieran (09-03 )mentions Gertrude did a sculpture of a dog called Joy.
If Gertrude did animal sculptures it might be worth mentioning that a Lilas Blanc is a type of pedigree dog--Malinois , Caly de Lilas Blanc.
Just a thought-or am I barking up the wrong tree ?? :-) .

I have run across this sort of title before, but I am not sure if such coy, teasing titles refer to a real person (in this case a real Baronne L. de N.) or if they are merely a gimmick for effect. I suppose it may vary from one case to another.

This is probably a coincidence, but I have found a catalogue 1873 -I think for a sale- of the art collection of Mme la Baronne N.
https://www.amazon.com/Tableaux-anciens-modernes-aquarelles-collection/dp/2329539339

If this baronne de N.'s art collection was for sale in 1873, this is not the young woman portrayed in 1891, but it is intriguing. So it is not our sitter, but perhaps a relative?

The 1873 sale catalogue can be downloaded from Gallica. I haven't time to look further today (and I am not working 10–14 May), but a quick glance shows it's annotated, including with a reference to her on p. 17. The note appears to start with a name 'Zola' (but probably not)? It starts, 'Hildebrandt's watercolours belong to the baronne de N –, who ... exhibited by her(?)'. I can't work it out.

Eduard Hildebrandt was a German artist who started studying with Isabey in Paris c.1842 (Isabey's works also feature in this sale), then travelled round the world, and this watercolour collection gives some sense of his wanderlust.

I was searching for "lilas blanc" in the BNA and found an article from 1879 about Sarah Bernhardt that mentions a painting by her friend Louise Abbéma called "Lilas Blanc".

My composite is based on an image of Bernhardt's bust of Abbéma from 1878 on the AWARE website (https://tinyurl.com/7buuuxaz). Note that the busts have similar flowers.

My guess is that the woman who lent this sculpture to the Gallery was the sculptor Amelia Cate De Lautour who was born in 1877 and passed away in Bournemouth in 1949.

Amelia appears as a nine-month-old child on the 1881 Scotland Census. Her birth date was neither 1877, as I stated earlier, nor the year shown on the 1939 England and Wales Register, 1887. She likely inherited the bust when her mother passed away in 1928. I imagine that her sister Mary Thérèse de Lautour (1881–1950) would have inherited the bust when Amelia passed away in 1949.

This could be a bust of Madame Lucie-Caroline-Eugénie Legoux (née Chausson)(1843–1891) who was the wife of Baron Jules Legoux (https://fr.wikipedia.org/wiki/Jules_Legoux).

She was a composer of music under the pseudonym Gilbert Des Roches. https://tinyurl.com/5n8atmxz.

The composite is based on an image on the RIPM International Center website. https://illustration.ripm.org/illustrations?indextag=4470

The N could stand for "Nice" since she might have been living there when her "opera comique" "Joel" was being staged.

Description
The sitter is shown wearing a corsage of white lilac. The bust was exhibited at the Salon of the 'Union des femmes peintres et sculpteurs' in 1891, no. 11 in the catalogue, with the accompanying poem: 'Se peut-il qu'un regard aussi plein de tendresse / Soit ici bas? / C'est un parfum léger, qui vous prend, / vous caresse, / Rose et blanc lilas.’ (Could there be a look more filled with tenderness / here on Earth below? / It is a light scent that takes hold of you, / caresses you, / Pink and white lilac'.