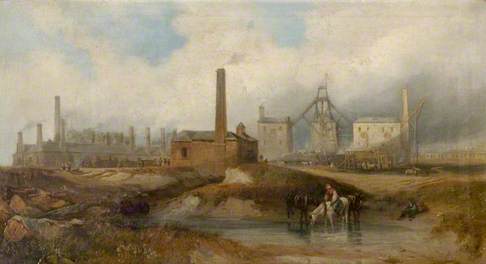 Does anyone have any ideas about the location of this 'Industrial Scene'?

The painting was donated to Nottingham City Museums and Galleries in 1938 by a London-based family. We are not aware of an East Midlands connection. John Wilson Carmichael was born in Newcastle and was based there in his early to mid-career before moving to London.

The title has been amended to 'Industrial Scene (South Hetton Colliery, near Sunderland)'.

If any contributors have new information about this painting, we encourage them to propose a new discussion by following the Art Detective link on the Your Paintings page: http://www.bbc.co.uk/arts/yourpaintings/paintings/industrial-scene-47480

Carmichael painted many industrial scenes in the north east of England, for the colliery owners etc, and many were engraved. This appears to be South Hetton Colliery on the River Wear near Sunderland. See the image on http://freepages.genealogy.rootsweb.ancestry.com/~cmhrc/001.jpg attached). The publication date of 1835 is right too. For a history of the colliery see http://www.durhamrecordsonline.com/literature/south_hetton.php, but what the connection is with the Nottingham donor's family is not clear.

Good Day All ! Got a pop for the 'Industrial Scene' ... although I am still looking to identify the location, I'm getting familiar (1st comment) with the Art Detective and will come back to you shortly
Meanwhile, I need someone to help me with a monumental oak sculpture (re. stone sculpture outside RIBA) that is signed J Woodford surely wellknown by Nottingham City Museum (a 'Robin Hood' bronze sculpture by the artist)
I will go in section for 20th century works of art .... but is Art Detective limiting to only paintings or open to all types of works ?
Bye for Now, onaturel

At present Art Detective is limited to oil paintings in public collections that appear on the 'Your Paintings' website (http://www.bbc.co.uk/arts/yourpaintings/paintings/search) and discussions on particular paintings should be proposed via the link on the painting's page on 'Your Painttings'. For sculpture (and for James Woodford) see the 'Mapping Sculpture' project http://sculpture.gla.ac.uk/view/person.php?id=msib2_1208277486

Just as a point of comparison, it's very similar in composition to the larger Carmichael in the Yale Center:

Interestingly Yale's picture is of Murton Colliery, nearby to South Hetton and also owned by the South Hetton Coal Co. (later Ltd.). I guess the then owner, Col. Thomas Braddyll, commissioned both paintings, ten years apart as Murton was not productive until 1843 (http://durhamrecordsonline.com/library/tag/south-hetton-coal-company/). I shouldn't have said South Hetton was on the Wear. It is near the river, but shipped its coals via Seaham Harbour on the coast.

I can help as far as the local connection goes. The family may have been London based perhaps at the time of acquisition but I found records for them in the Nottingham area during the first world war when they sadly lost their son who was a captain in the army.
There is also a single picture in the same collection by the lady herself, I believe? The name is an unusual one.
http://www.bbc.co.uk/arts/yourpaintings/paintings/nasturtiums-46782
Ironically, although I initially correctly identified the scene as being the North East coalfield I neglected to spot that it is in fact no more than a couple of miles away from me. The shame...

Please consider that the painting is a view of Hebburn Colliery, but later than the following view:

Also, scroll down to Hebburn "A" Pit photograph at the end of this link:
http://www.hebburnandmidtyne.co.uk/coal-mining-in-our-area

Refer also to photograph of where Glasgow based company called Tennant's Chemical Co set up business in the 1860's:

A note to say thank you very much to everyone for their very useful comments and comparative images, we'll be adding them to the file and database records and can make the title more accurate now.
And a correction, the donor was Nottingham-based, apologies, we had crossed documentation here.
With best wishes
Sarah

Drawing your attention to three illustrations in the "Views of the Collieries" book referenced below These illustrations follow the description of the South Hetton Colliery on pages 43-44 but unfortunately, the titles of the illustrations are too blurred to read. Presumably, they are all views of the colliery ca. 1844.

Perhaps someone with local knowledge can explain the discrepancies.

Ref.
Via Google eBooks
Title A Series of Views of the Collieries in the Counties of Northumberland and Durham. By T. H. Hair. With descriptive sketches and a preliminary Essay on Coal and the Coal Trade. By M. Ross
Authors M. Ross (of Durham.), Thomas H. HAIR
Publisher J. Madden&Company, 1844
Original from The British Library
Digitized Dec 11, 2014
Two illustrations after page 44

The painting in Nottingham is so close in all details to the illustration of South Hetton colliery in the Penny Magazine of the same time, in building layout, chimneys, fenestration, roof details etc. that there surely cannot be any doubt they are the same.

I cannot find a copy of Hair's book online and have not found an illustration by Hair of South Hetton colliery online. The Hetton colliery, illustrated by Thomas Hair (see http://sine.ncl.ac.uk/view_image.asp?digital_doc_id=6112), is a different colliery. I worked for a long time as a fine art curator in the Tyne and Wear so know Carmichael's work well, and the local history and topography quite well.

Thank you for the link to the Hetton Colliery which is also reproduced in "A Series of Views of the Collieries in the Counties of Northumberland and Durham" By T. H. Hair, (immediately following the description of the Pemberton Main Colliery p. 42).

My objective is understand the difference in the views of the South Hetton colliery, not to dispute the similarities between the painting and "The Penny Magazine".

I read that the first shaft at the South Hetton colliery was sunk in 1831 and full-scale production began in 1833. The Braddyll Railway was also complete in 1833 "...just in time to transport the first coals for export." Do you see evidence of the railway in the painting?

I am curious about the industrial complex pictured above. Could a population of approximately 263 (1831) or even 4,000 (1841-1861) have supported such a facility? I've searched for but not found mention, photographs or other images of it. Is it possible that the complex depicted was anticipated or planned, but never built?

I bow to your knowledge of Carmichael's work, but given the three distinct planes in the painting, I wonder if we aren't looking at a meditation on the "march of progress" (i.e., from the bucolic past, to the current exploitation of natural resources, to the inevitable future of modern industry).

The collection has emailed to say they accept the scene is South Hetton Colliery, near Sunderland, and note the title should be changed accordingly.