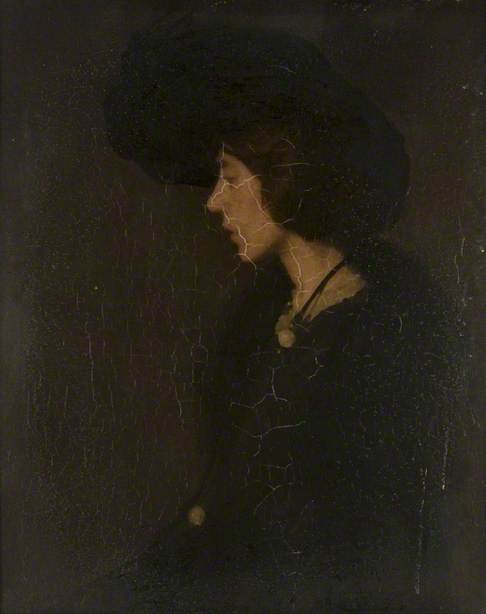 Has the museum considered that the sitter of Gerald Kelly's painting 'Mademoiselle' might be Eileen Gray, as she was close to Kelly and attended the Slade at the same time 1900–1902? Gray left for Paris in 1902 and enrolled in the Ecole Colarossi. In Paris, Kelly introduced Gray to many of his friends.

Art UK consulted Dr Jennifer Goff of the National Museum of Ireland, the author of 'Eileen Gray: Her Work and Her World' (Irish Academic Press, 2014), who commented: ''“Mademoiselle” is a lovely painting by Kelly. Unusually very soft in style. In my book I quoted from Aleister Crowley’s autobiography. He actually continues saying how Kelly had actually painted over the portrait of Gray, but never returned to it. It would be interesting to find out more about the provenance. I see it was bequeathed by John Keppie. From looking at the painting, I believe that the sitter is more probably his sister Rose Kelly.'

Could anyone find evidence to support either suggestion about Eileen Gray or Rose Kelly?

The collection comments: 'There is no provenance information in the object file for this painting and very little additional information. I have checked the back of the painting in POD 4 and it has no information on it except the accession number. I’m very happy if we open the question out as to whether this could be Eileen Grey or Rose Kelly. It would be great to find out more about this painting.’

Might this be Kelly's 'Portrait of Mademoiselle M' that was exhibited at the Society of Portrait Painters exhibition in 1904? - the attached London Evening Standard review mentions 'an interesting face with the lips parted'.

This is a Profile portrait of Mlle Sybil Mengens. We had the other version: https://leicestergalleries.com/browse-artwork-detail/MTQ5MDI=

Peter, Thank you for the link to your sale record – what great news!

Another painting by Kelly with the title ‘Mademoiselle’ is on the Maas Gallery website. https://tinyurl.com/2p84ecza

Since Kelly's sister Rose Edith Kelly was widowed in 1899, I doubt that a painting of her in the early 1900s would have had the one-word title "Mademoiselle". She married again in 1903.

The attached article from 'The Tatler' of July 30, 1958, includes a portrait of Mademoiselle Gaby Aumont by Kelly dated 1904. She could be the sitter in the Art UK work.

I presume Mlle Sybil Mengens is actually [Harriet] Sybil Meugens, not a French model but an English artist. She was born in Calcutta in about 1877 to English parents (https://bit.ly/3tP9Kmk), her father being of Belgian descent and the founder of a prominent accountancy practice there, continued by his son (https://pwc.to/3tMAPGO p11) and now part of pw India. She presumably studied in Paris as she is recorded as exhibiting there in 1905 and 1906 (https://bit.ly/3qZICzm).

She clearly knew Kelly and his circle there. There is a drawing by him said to be of her (https://bit.ly/3nXCl5g) and she is listed as a primary correspondent of Aleister Crowley (then married to Kelly's sister Rose) in his collection at the University of Texas (https://bit.ly/3GZCf4x). In Crowley's Confessions (https://bit.ly/3AIyXQZ) he says:

"I remember giving the manuscript of Alice to Kelly and a girl named Sybil Muggins to read, and they agreed that no really nice woman would have kissed a man so early as the thirteenth day of his wooing. I must confess to having been taken a little aback, especially as Sybil Muggins was [Stephen] Haweis's mistress. A few days back, moreover, Haweis having gone to Brussels for a week, she switched over to Kelly. What dreadful days those were! They worked themselves up into such a state that Kelly actually proposed to marry Sybil, and his sister bustled over post haste to prevent it by threatening that his allowance would be stopped if he did anything so foolish."

Though of course Crowley's veracity may be even less reliable than his spelling. This must have been before Haweis impregnated and then married the modernist poet Mina Loy in December 1903 (https://bit.ly/3KSjYZp).

She was listed with her family in Hampshire in the 1911 Census, but in 1912 married the artist and stage designer George Sheringham (1884-1937) (ArtUK: https://bit.ly/3u0Yfbs), as it happens like Kelly and Haweis, the son of a clergyman. Like her husband, Meugens did flower paintings and still lifes and she exhibited in London (under her single name) during and after WWI, being noticed by B H Dias (Ezra Pound) in the New Age (https://bit.ly/3H1B847) and illustrated in The Studio (https://ebay.to/3rPdlxX). Though there was only one auctioned piece online by her I could find (https://bit.ly/3FStub2). The link with the esoteric world of Crowley may have continued as the Sheringhams were the dedicatees of C G Harrison's "The Creed for the Twentieth Century" in 1923 (https://bit.ly/3rU2QK6).

As it happens she already has a link with Glasgow having donated a Charles Rennie MacKintosh watercolour, given to her by the artist, in 1938 after her husband's death. The related article on the Glasgow Museums Art Donors Group blog (https://bit.ly/3rKukBz) oddly concentrates on George's career rather than her's, but is a very useful summary of his.

She also made various other donations and sales of pictures in the same year (ArtUK: https://bit.ly/3FYNuZx) mainly by her late husband, but also one by Haweis. She died on 8 August 1942.

Attached is a composite for consideration.

I don't think there's a serious case to make for it being two different sitters, despite the slight differences,primarily the end of the nose. (I've had cause to look at Daniel Orme's versions of Nelson in the last couple of weeks and variations or nose profile are even more marked, albeit only from a single sitting, or at most a couple). Very slight changes of angle of view can make a difference. They look like separate portraits in terms of that on the right being from more above and the sitter more upright than in the other, not (strictly speaking) 'versions' of a single one with just the dress changed, albeit in same general pose.

It is of little consequence following Mark’s excellent note on Mlle Meugens, that she appears not to be mentioned in Derek Hudson's Kelly biography (1975), but there was a painting entitled 'Sybil' in the RA 1957 exhibition of Kelly's work, dated 1903, (no. 53) and being the same size as the painting that passed through Peter's gallery it is possibly it. The Glasgow picture - despite its condition - is low-toned and Whistlerian, as one would expect, and Kelly did show portraits of the 'Mlle M ...' at the Salon d'Automne in 1903 (324) and the Salon (Soc Nat des BA) in 1904 (667). And, of course, Kelly went on to paint Whistler's brother-in-law, Charles Whibley, (Jesus College, Cambridge, not on Art UK).

The attached might be of interest, from the The Scotsman, of Monday 25th June 1945.

In 2014, Bonhams sold a lot entitled 'Mademoiselle' that was attributed to Kelly. Alas, there is no picture on the record:

Pity the picture has aged poorly.

Interesting list Kieran, and not all Glasgow School : Henry Muhrman (1854-1916) was b. and trained in Cincinnati, worked a long time in London as another dark-toned follower of Whistler, then after Paris moved to (and died in) Meissen.

Has the prime question of 'who is sitter here' now been adequately resolved?