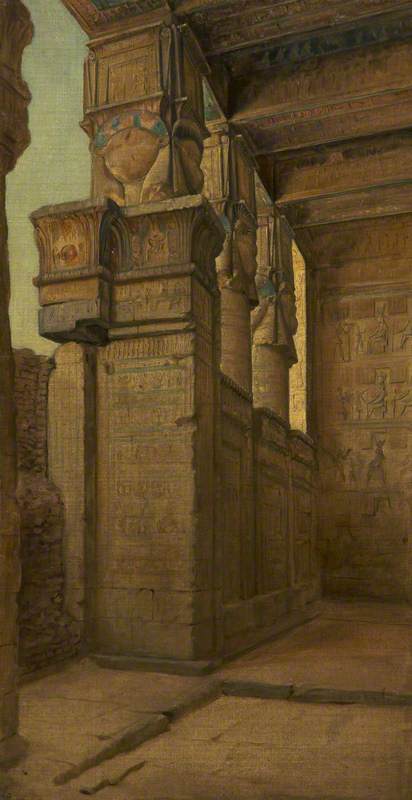 Does this view show the interior of the Hypostyle Hall of the Temple of Hathor at Dendera? The form of the column capitals seems to be the same. Nineteenth-century prints and photographs of the site show that the entrance had not been completely excavated as with the blocked off alcove here on the left.

Google Maps provides several views of the temple's interior, this one https://tinyurl.com/y86mbq9l has nearly the same perspective as the painting. Even the incision in the left column of the entrance is still there!

Here are two paintings of the Temple of Hathor c.1838,
I question that the one with faces is really one of David Roberts' paintings. the other Image 2105 is in my book of Roberts paintings and so is authentic,

That appears to answer the 'what and where', but can the question be extended to who might have painted it (not Roberts)? Probably someone who did more similar....

I will throw in a suggestion of Walter Tynsdale; the attached contains a possible exhibition of the work and a possible account of painting it with illustration. The book mentioned only has one colour plate but the original book allegedly has 60 which might include this work if it was one of his.

Tyndale (no 's') is an interesting suggestion, Jen, and at first glance looks promising; however our work is an oil, and according to Christopher Wood, after taking up watercolours c.1890 Tyndale "never again used oils". Certainly all the Egyptian scenes that illustrate the two books you reference are in watercolour, and our painting (or even a w/c version of it) is not among them. The books (with all the plates, I think) can be viewed online here http://bit.ly/2Cf9tvT and here http://bit.ly/2AE8iZu . The great majority, too, are signed.

Yes, Christopher Wood's statement (in 'Victorian Painters') is confirmed by a piece about Tyndale in Vol 38 of 'The Studio' (#162 Sept 1906). In 1889 the artist moved to Haslemere (checked in Electoral Registers), and not long afterwards a misunderstanding with a painting pupil forced him to try watercolours for the first time. He postponed the classes, sought advice from a friend, and "the next day he invested in a new outfit, and with one exception has never touched oils since". See: http://bit.ly/2AZ3laJ

As Tyndale's Egyptian visits seem only to have begun in the mid or late 1890s, I think we have to rule him out.

I've no idea what that photo of Bendor and Emma Dabiri is doing at the bottom of my last post - I certainly didn't attach it (or anything else, as far as I remember).

Must be a Christmas cracker from Art UK

Not sure what that was doing there, either! I've removed it now, Osmund.

This discussion is now linked to the British 19th C, except portraits group.

Is it certain this is an oil on canvas? Looking at it again, the surface has a very even texture and, though this may be due to the photo, seems to have little in the way of impasto. It has something of the appearance of a coloured print attached to canvas.

An enlarged view of the image suggests that this is thinly applied oil on board. The surface texture is perhaps clearer in the attached detail.

Thank you for that. It alays the suspicions I had.

I think we can confirm Al Brown's identification of the temple as the Hypostyle Hall of the Temple of Hathor at Dendera. I am afraid that in the absence of documentary evidence (labels, provenence, etc.) the artist is unlikely to be identified. It is not a particularly high quality painting and hundreds, if not thousands, of amateur artists visited Egypt from the 19th century.

Thank you all for your contributions. I am happy to recommend that we close this now as all evidence suggests that the Egyptian temple is the Hypostyle Hall of the Temple of Hathor at Dendera. Art UK, I agree with Andrew's comment that the artist is unlikely to be identified and unless anyone has any evidence to suggest otherwise if you are happy, the record can be updated with the aforementioned location without artist attribution.

I realise that this has been up for quite a while, but is it possible that it could stay up for a few days more please?
Thanks very much

Manto, thank you for posting this to the top of the list today. I'm sorry for the delay. I see that Andrew made his recommendation while I was ill with the virus and this is the first time I've seen it. I haven't caught up on everything that happened in those two months.

E. Jones, many thanks for offering more information. A few more days will be fine.

Hello Marion - I am very sorry to hear you were ill and delighted to learn that you are recovered and can resume work.

Thank you for agreeing to keep the discussion live for a few more days; I will monitor accordingly.

As the subject has now been identified in the discussion as the Temple of Hathor (Dendera, Denderah or Tentyris), could it now be possible for the collection to be able to the source a reference/accession record using the new information?

Is it also possible that there could also be a slightly different avenue of research concerning this painting?

The Bolton Corporation established a museum of natural history called the ‘Chadwick Museum’ in the 1880’s.

The funding for it’s creation was donated in the 1870’s by a gentleman called Samuel Taylor Chadwick in his bequest to the authority. Due to an attached caveat, there was a strict time limit for the construction to be completed.

The museum, from very early on, had an association with the Egyptian Exploration Fund through it’s subscription scheme. The Curator William Midgley had a particular interest in ancient textiles and the collection was also supported by the efforts of Annie Barlow. Annie Barlow was the daughter of a local cotton mill owner who had a passion for Ancient Egypt. Ms Barlow was also the local secretary for the Egyptian Exploration Fund in Bolton. She also donated her share of her own subscription to the museum.

The subscriptions with the EEF helped fund various excavations in Egypt. In return, they received a share of the artefacts. They received items as early as 1884. Through this process they gradually developed a significant collection of Egyptian artefacts.

Today, the museum has one of the largest collection of Egyptian artefacts in public ownership in Britain. There is over 12,000 pieces.

The records of the EEF, list the Chadwick museum as having received items from Dendera, including Hathor heads from a variety of locations. There are also decades worth of letters in the records of the EEF between the Curators of the Bolton Museum and Flinders Petrie.

The attached floorplan of the Temple is from 1902 and I think that the painting may be the entranceway of the Temple in the ‘Pronaos’ area rather than the inner ‘Hypostyle hall’, although many of the more current floorplans seem to reference that area as the ‘Outer Hypostyle Hall’.

*Is there anything on the back of this painting?

*Could the painting have been separated from the Egyptian collection, when both collections were merged due to the planned demolition in the 1950’s of ‘The Chadwick?

*Do the museum have a record as to the items that that were moved from ‘The Chadwick’?

*When was the entrance in the Portico bricked up?
and when was it re-opened?
The entranceway appears to be shown in paintings, prints and photographs of the early 1800’s to being fully accessible before being bricked up and the exterior level raised, hiding the majority of the outer walls. This, I think is the brickwork that is visible on the left in the painting.

*Could it be that this painting was not a piece of work that was meant to be a judged for it’s aesthetic merits, rather than it’s illustrative or educational qualities?
The main focus of the the piece appears not to be the technique, but the temple. Perhaps it was ultimately used for these qualities in support of the collection?

*Are there any more illustrations/paintings of Egyptian subjects within the Egyptian collection at Bolton Museum?

Title
Interior of an Egyptian Temple

Medium and Support
oil on canvas on board