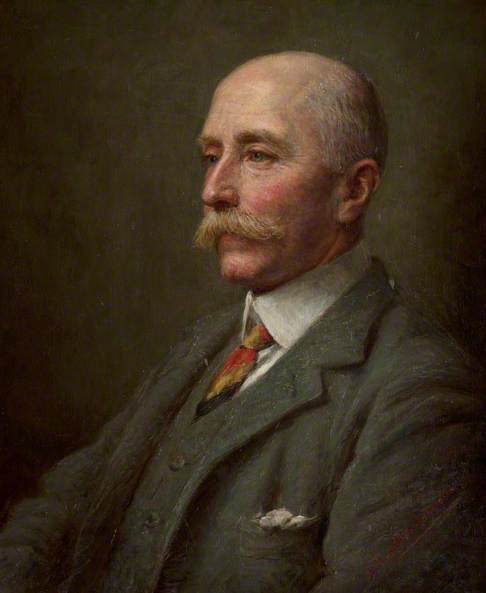 We own a beautiful painting of ‘Miss Toller’ by the artist, Bessie Hamilton Johnston. Our desire to learn more about the artist led to this painting by the same artist at the Clan Macpherson Museum, the only example of her work in a public collection.

We can find nothing about Bessie Hamilton Johnston on the internet. We would be interested to know whether she was Scottish. She appears to be an amazing and accomplished female artist and it would be lovely to know more about her.

Art UK: we have nothing but some active dates and would be grateful for any further information to pass on to the Clan Macpherson Museum. The portrait of Albert Macpherson of Cluny is also signed bottom right 'B. Hamilton Johnston'.

The collection has commented: ‘The Clan Museum archives has no information on the artist. The back of the painting has been checked and there is no further information there.’

The sitter was the 17th Chief. At what date did the family move its principal seat from Speyside to Blaiirgowrie in Perthshire?

The artist may be related to Sir Henry Hamilton Johnston [1858-1927] explorer, artist,student at the RA, botanist, colonial administrator , Liberal politician and linguist. Gill carved a memorial plaque to him in St Nicholas, Poling, Sussex
There is a 1977 biography devoted to him by James A Casada

for the Chiefs see online Macpherson of Dalchully [ note the spelling] , The Chiefs of Clan Macpherson, Edinburgh , 1947
There was a sale in Glasgow in 1943 which included family portraits

for Albert see pp.67-8 - he spent much of his time in London, having trained as a stockbroker

Our portrait looks like 1920s based on the sitter's dates and clothing.

Andrew, thank you for the Probate calendar book entry. I note Probate was granted "to Thomas Wilfred Bennet Clark writer to the Signet". (Writer to the Signet is a wonderful term for a Scottish solicitor.) I would presume that although BHJ died in England that her will was drawn up in Scotland, which would suggest that she previously resided north of the border.

The death record index of the Bessie Hamilton Johnston who died in Hove in 1943 gives her age at death as 83, which means an approximate birth year of 1860.

This is therefore likely to be the Bessie Hamilton Johnston in the 1911 census, married to Augustus Hamilton Johnston. They were married in 1888 in Kensington, and her maiden name was Bessie Robertson Ross (her father was Patrick Robertson Ross, who was born in Edinburgh... they are in Scotland in the 1881 census and he is a Major General).

Her husband Augustus was also born in Scotland. There are more related records on Ancestry which I am sure someone will be able to look up and report back on... I can't see anything relating to being an artist though.

There was a son, Douglas Hamilton-Johnston (b 1889) who was killed in the First World War:

This also says Bessie's father was a Major-General, so it's presumably the same family.

It also says he lived in Chelsea (presumably during his years at Westminster School) so that might be helpful.

Here is an expanded possibility, with its various Scottish and London connections:

Born as Bessie Robertson, at Cleveland Square, Westminster, London, on the 15th September 1860, from which address she was baptised on the 6th October at Paddington Green St Mary, Westminster, she was the daughter of Patrick Robertson, an army General, and his wife, since 1851, Amelia Ann Maynard (born on the Cape of Good Hope, and whose father was Charles Maynard, a Cape merchant).

When Patrick Robertson's uncle, General Hugh Ross, died on 24th June 1864, he inherited his uncle’s property in Scotland and changed his surname name to Robertson-Ross.

"A marriage is arranged, and will take place on June 2, between Mr. Augustus Hamilton Johnston, eldest son of the late Captain James Charles Glen Johnston, R.N., and Bessie, youngest daughter of the late Major-General Robertson-Ross, C.B., of Glenmoidart, Inverness-shire, N.B."

From her address at 31, Gloucester Road, Bessie Robertson-Ross was married, on the 2nd June 1888, at St. Stephen's Church, Kensington, to Augustus Hamilton-Johnston, gentleman, of 57a, Pall Mall, London.

On the 2nd April 1896, at 22, Draycott Place, London, she gave birth to a son, Ewen Colquhoun Robertson Hamilton-Johnston.

By the time of the 1911 UK census, Augustus (61), described as a "retired cattle rancher", and Bessie (50) were living at "Bandirran", Pangbourne, Berkshire, together with three servants. Their three children were not present.

In the publication Votes For Women, of Friday 17th May 1912, an advertisement appeared offering "Drawing and Painting Classes. Two lessons weekly, of 2 hours, for term of ten week, one & half guineas. - L., Studio, 1, Eldon Road, Kensington." This is the same address as is on the label attached above.

The above-mentioned son, Ewen Colquhoun Robertson Hamilton-Johnston, was killed in France during WWI on the 1st September 1918. The family's address at the time was 11, Park Mansions, Kensington.

The sitter is the actress Nell Caroline Berta Toller, born in London on the 3d December 1883, who was married in London, aged 26, on the 12th July 1910, to Montague Vivian Smith, a barrister. Her acting roles, as Miss Nell Toller, appear in various newspapers between 1907 and May 1912.

From her address at 2, Hugo House, Sloane Street, London, she died at Camberwell House, Peckham Road, London, on the 12th January 1943.

On the basis that the sitter was married in 1910, the portrait must have been executed just a few years before that date and most likely from between 1903 (aged 20) and 1910.

ArtPrice has an auction record [1], in Italian:

which Google translates as:

"Bessie Hamilton JOHNSTON (XIX-XX) is an artist born in the XIX. The first auction recorded on the site is a 1999 painting by Lawrences Auctioneers, and the most recent a 1999 painting. The artist's quotation and indexes established by Artprice.com are based on 1 awards. In particular: painting.".

A Nell Toller composite is attached.

Johnson & Greutner only list a Bessie M. Robertson, who showed 27 works at the RSA, 1897-1922 and was presumably someone else, since no second given name has been mentioned. I can't see anything that is a closer fit with the other surnames.

Here is the Wiki page for her quite interesting paternal grandfather, Patrick Robertson, a leading Edinburgh advocate and Lord of Session: https://bit.ly/3iFGXt9

Bessie exhibited four works at the Society of Women Artists between 1906 & 1910 as 'Mrs Hamilton Johnston' from Cadogan Gardens, Chelsea (their address in the 1901 Census). She doesn't seem to have exhibited under her maiden name. A search of the BNA might prove fruitful, though I haven't time to do it myself just now.

Sorry to sound pernickety, but the relevant sitter is not Nell Toller but Albert Macpherson of Cluny - Miss Toller is the subject of a privately-owned portrait that to an extent informs our knowledge of Bessie Hamilton-Johnston, but she should not become the main focus of our research.

Not pernickety and quite correct. I got carried away by the subject.

I can no find no reference in the BNA to Bessie Robertson-Ross has having exhibited any works of art prior to her marriage in 1888. There are, however, a handful of reference to a B. Robertson-Ross being the painter of china pieces in 1880 and 1881.

Attached are some additional details on Bessie's parents. A very extensive and detailed report appeared in several Scottish newspapers on the elaborate re-marriage celebrations in 1886 of her mother to Colonel MacDonald MacDonald.

There is a very small amount to be found in the press about Bessie in the artistic context (as 'Mrs [A] Hamilton Johnston', though sometimes misspelt as 'Johnstone'). Such as it is, it confirms one's suspicion that she was an amateur (in the sense of being non-professional). There was one joint exhibition at the Bruton Gallery in Jun 1907, but this was organised by the three exhibitors themselves; their social connections ensured a fair bit of kind press coverage, one example of which (the Morning Post) I attach. One of the exhibits was an oil portrait of her husband; and as a press report of the wedding of our sitter's daughter and only child 'Miss (Frances) Macpherson of Cluny' in July 1908 lists the Hamilton-Johnstons as guests, I would guess that her portrait sitters were generally people she knew socially. I also think it likely that our portrait dates from roughly the same period, i.e. pre- rather than post-WWI. Perhaps it was one of those exhibited.

Also attached are a number of other society wedding reports from 1898 to 1921 which included huge and detailed lists of wedding presents, including those from the Hamilton-Johnstons. The first couple's gift from them is described as a "self-painted picture after Greuze"; and while it is less certain in the case of the next three (all of them pictures, one a copy of a Raeburn), I rather suspect they were all her own work. And it seems very possible that the watercolours she was selling from a stall at a charity fête held at Axminster in July 1921 (just before her husband's death) were hers too.

Kieran, Osmund and others have found out a good deal about the artist Bessie Hamilton Johnston. Time to close this discussion if nothing pops up in the next week or two?

One of her works is noted in an article (attached) in the ‘Forres Elgin and Nairn Gazette’ on May 6, 1885, about the Royal Scottish Academy’s Exhibition, 1885. The article states “... and the late Major-General Robertson-Ross, C.B., of Glenmoidart, Inverness-shire (490[?]), has had a careful delineator in Miss Robertson-Ross ... “.