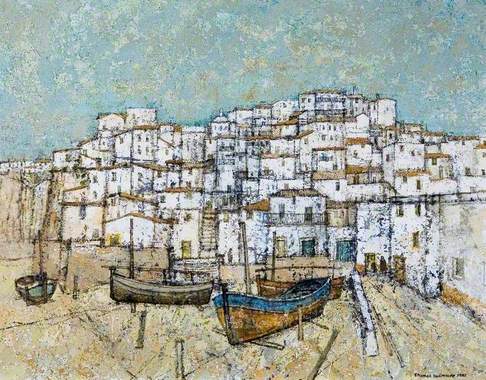 Thomas Swimmer is an interesting yet little known artist. There are six examples held on Art UK, all from the 1950s or early 1960s. I have owned five works myself, the latest in date being one from 1964. He studied with distinction at the Royal Academy Schools from 1950–1956 and exhibited at the RA from 1953–1956. It appears that he also exhibited with The Redfern Gallery and The Piccadilly Gallery. In the 1960s he apparently undertook some work for the BBC. Thereafter he seems to have disappeared from view. According to one auction results website he died in 1983 but that fact seems not to have been verified. Nearly ten years ago I spoke with one of his friends from the 1950s who told me that Swimmer lodged at this man's parents’ house in Kensington in the 1950s and the artist had a studio 'on the edge of Dartmoor, now overgrown and derelict'. This friend also told me that Thomas Swimmer (and his wife?) had died in a motoring accident many years ago but he did not specify a date or location although in England. Apparently Swimmer enjoyed fast cars and motor bikes.

As little is recorded on the artist I think it would be helpful if Art Detective could help in fleshing out the existing biography of the artist which may assist the collections who hold his work. The research may be a little complicated as it is understood that he was born to British parents in Dieppe and that Swimmer may not have been his birth surname. Again according to the auction website mentioned above, they suggested that alternate surnames were Taylor and/or Wheeler. This is something of a conundrum and it may be time for Art Detective to solve it!

This feels strange but I am now responding to the discussion I raised as new information has come to light, which resolves the issues raised. It is an old friend of the artist who got me on the right track. The artist was born THOMAS WHEELER TAYLOR in Dieppe in 1932. His mother was from central Europe, possibly Hungary, and her maiden name was SCHWIMMER. Professionally Tom Taylor adopted the name SWIMMER to distinguish himself from others of a similar name. He married his wife MURIEL in 1955 (her dates were 1932-1989). His father came from Tavistock and it is there that the artist had his studio, at Burnt Lane, Brentor, Near Tavistock, Devon. THOMAS WHEELER TAYLOR died on 13th October 1983 in Suffolk. He had been living then in Great Livermere, a village north of Bury St Edmunds in Suffolk.

In January 1954 he was featured in Britannia & Eve publication as a painter of plates "with designs of Spanish peasant life or any personal theme, each costs 10s from 103 Lansdowne Road, W.11."

He also painted the rather wonderful melange of Devonshire imagery that appear in the attached advertisement from the Illustrated London News of Saturday 11th April 1959.

Landscapes and still lives were exhibited in his fourth solo show at the Trafford Gallery, 119 Mount Street, in May 1966.

Thank you Kieran, that information is very useful. I had forgotten about the solo shows at The Trafford Gallery.

Acquisition method
purchased from the 'Pictures for Schools' exhibition, 1961

Description
The ancient fishing village of Albufeira in Portugal has been transformed since the growth of the tourist industry in this part of the Algarve during the past four decades. Swimmer's interest in the early 1960s was in capturing the character of the old town rising above the Praia dos Barcos (the Fishermen's Beach). His interpretation does not rely on straight representation; his interest is in the geometry of the architecture, a focus which is helped by the use of the subdued palette of colours.