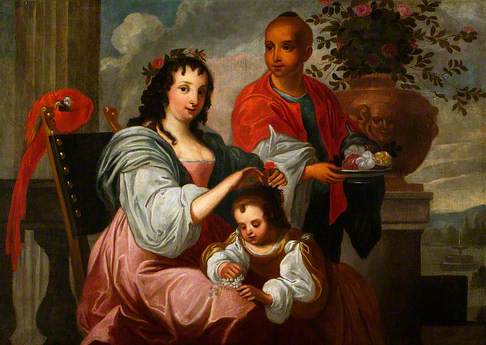 I was browsing the catalogue for the auction which the Dorotheum in Vienna will be holding on 18 December 2019 (‘Old Master Paintings’), when I came across a painting which is remarkably like this one. It is Lot 399, entitled ‘Portrait of a Lady with her Daughter and a Page’, attributed to the North Italian School, second half of the 17th Century, with a tentative attribution to Pier Francesco Cittadini (1616–1681).

Perhaps this information could help firm up the attribution?

The donor of this and another work in the same collection (‘Elizabeth Risby, with John’ https://bit.ly/2Pwmud5 ) was A. D. Harrison. The manors of Brook Hall and Maidenhall remained in the possession of the Risby family until nearly the middle of the 18th century, when the male line died out, and the manors passed in the female line to the Fiskes and then to the Harrisons. See ‘The Risbys of Felsham’ https://bit.ly/2r0DXkh

The donor was most likely one of those Harrisons, but perhaps this could be verified?

The 1992 accession number is not a clear indication of when the object came into the collection. 1992 was simply a year when much of the collection was given the accessions numbers they have today. They may have come from one of the local authority’s other buildings such as the old council offices, the Athenaeum or even the former clock Museum.

The Suffolk picture is obviously a copy of the Dorotheum picture. Who was Elizabeth Risby? Here's a comparable Cittadini:

Thank you to the collection for the attached photographs of the pendant portrait of Elizabeth with John, and of the back of the painting. The label reads: ‘Elizabeth Risby with Elizabeth/ 1992.9.333/ BSE: Ref P333’.

There's some info on this old post about who Elizabeth Risby was: http://gallery.nen.gov.uk/asset652092-.html (although I've not checked it for references or anything)

Yes, the servant would fit Native American better than someone from India or China, but if this is Elizabeth Risby, how (or where) would Cittadini have painted her?

Yes, Jacinto's last question was my question. I looked up Cittadini's biography (admittedly in Wikipedia) and he seems never to have gone to the UK, or even left Italy. So unless Elizabeth Risby went to Italy at some point (which might have been the case if she had been a man - doing the Grand Tour), I really don't see how the two ever connected. From which I deduce that either the painting is not of Elizabeth Risby, or that the painting being sold tomorrow at the Dorotheum is not by Cittadini but by an artist who made it to the UK - or some painter saw the original Cittadini painting and made a copy of it, and this copy made its way to the UK and somehow it was thought to be of Elizabeth Risby.

Turning the question around, and focusing for a moment on the page, while I could see an Englishwoman ending up with a Native American page - through the colonies - I have difficulty understanding how an Italian woman would have ended up with such a page, which argues against the sitter being an Italian woman.

Best keep an open mind on the servant's ethnicity based simply on facial appearance: the dress and the shaved head look more oriental and if it (and the other painting) are by or after Cittadini then there are some other geographical circles to square: was Elizabeth Risby in Italy there, was Cittadini or followers in England, or is it really Elizabeth Risby at all. In the absence of hard evidence, identities (not least 'non-European' ones, as we've seen elsewhere) are often a minefield of wishful-thinking.

If both Suffolk pictures show Elizabeth Risby, it seems rather extravagant for minor gentry to have had both an Oriental or Native American servant and also an African one.

It is, of course, possible that neither servant was an actual person but a type, used as an exotic decorative touch not unlike the birds.

Over the past ten years, we have tried to do quite a bit of research into our two paintings and never really come up with anything definitive. Suggestions such as the slave being an Iroquois Indian (based on the haircut) have been mooted. Ultimately, I have never come up with any reason why this should be Elizabeth of Risby, or whether she had New World links beyond our apparently being told by the donor. The link cited earlier in the feeds (http://gallery.nen.gov.uk/asset652092-.html) was provided by a former colleague of mine, but I'm not sure I would agree with the New World statement. Elizabeth, I believe, was recorded as being the sole heir of Francis Cornwallis, which means her familial ties to the New World Governor Cornwallis' family are removed, despite their being a local family based at Culford Hall, but there is no suggestions she had estates in the colonies. I'm also not entirely sure her Son was called John, as the second picture states. I agree that I have no idea how an Italian would have come to paint minor Suffolk aristocracy. In short the only reason our pictures are attributed to being Elizabeth Risby is because they came from her one time house, albeit, probably over two hundred years after her death. I think it more likely our two paintings are a copy of (possibly) an Italian subject matter.

The Suffolk painting is substantially smaller than that in the Vienna auction which, together taking into account the truncated composition and its lesser quality, suggests it is a copy. Whether the Vienna painting is the original - and was also accompanied by a companion work - is another matter.

There are elements in these which remind me of Flemish rather than Italian works. If that were correct, it would provide a link between a painting in Suffolk - with its trading links to Flanders - and Austria.

Cittadini, the purported author, was influenced by Flemish artists living in Rome and is best known now for his many still lifes.

There was a Chinese servant at Knole in the 18th century, who was painted by Reynolds, but Knole was a much grander establishment.

So I think there is consensus that the "Elizabeth with Elizabeth" painting is a copy of another painting, either the one that was being sold today at the Dorotheum or of another painting of which both paintings were copies. I suppose it is still of interest to know who painted the original painting and who was the sitter, since that might explain how "Elizabeth with Elizabeth" ended up in Suffolk. Although Jacinto Regalado suggests that neither the servant nor the birds (parrots, I would assume) might be real but were used as exotic decorative touch, I would think that they were chosen as having some sort of link to the sitter. Looking at the global range of parrots, I could imagine either a South American link (the page then being an Amerindian) or a South-East Asian link (the page then being from S-E Asia); the range of parrots doesn't stretch to China, so I would rule out a Chinese link. In turn, this to me suggests that the sitter was either Spanish or she was Dutch.

Turning to the "Elizabeth with John" painting, which very likely is neither of Elizabeth or of John, what I am intrigued by is the house which one can see (not very well) in the background. It seems to me to have an architecture that I would associate with the UK or Northern Europe. Or is that too fanciful?

What also intrigues me is the little flag which the woman is holding. It seems to be showing a heart with two arrows through it. Does this mean anything?

The architecture you mention, Edward, looks vaguely classical but non-specific as to country, at least to me. The picture also looks like a copy, and not an especially accomplished one.

In the light of the last St Edmonsbury comments, might it not be better to start by confirming the artist? (1) Is this Cittadini or at least after him ? (2) If so then one next needs to know if he habitually painted identifiable portraits (though the sitters may in these cases be unidentifiable) or just elaborate but anonymous figure subjects.

Further to Edward Clarence Smith's comment, I have often wondered about the flag with the heart. If anyone has any ideas I would be really interested.

To Bury St Eds Mus--- What I see is a servant holding a tray of flower blooms and the Lady attaching a flower to the little girls hair.Does that make sense??

That is exactly as I would describe it, yes.

A potential problem with the Cittadini attribution is the missed opportunity for a much more elaborate and impressive floral still life, which was a Cittadini speciality, whereas the flowers here are fairly basic and workmanlike, particularly in the vase.

As has I think already been nooted it may be 'after' in a slightly modified form, but the issue remains primarily whether it is a portrait of named people (the Risbys) or just a genre piece: i.e. an Itanate import to which circumstance has misleadingly attached British sitter names. That's the simple explanation to be proved wrong. Identifying the artist as probably 'Cittadini or after' is itself an advance.

Barring better evidence than that currently at hand, it seems quite unlikely for multiple reasons already mentioned that this is a portrait of minor English gentry, and the same applies to its presumed companion picture with the black servant.

Regarding my preceding comment about the flowers, compare to those in this Cittadini:

Going back to Pieter van der Merwe's question - "might it not be better to start by confirming the artist?" - I've been trawling the internet to see as many paintings by Cittadini (or attributed to him) as I can find. So far, I've looked at about 60. I have to say, I find the Dorotheum's attribution more and more difficult to believe. Assuming that the painting in question is a portrait, Cittadini's portraits are much more formal, clothing is richer, the setting is always an interior, there are few "props". I attach a selection of the ones I have come across. There's also one Cittadini portrait in the Art UK database.