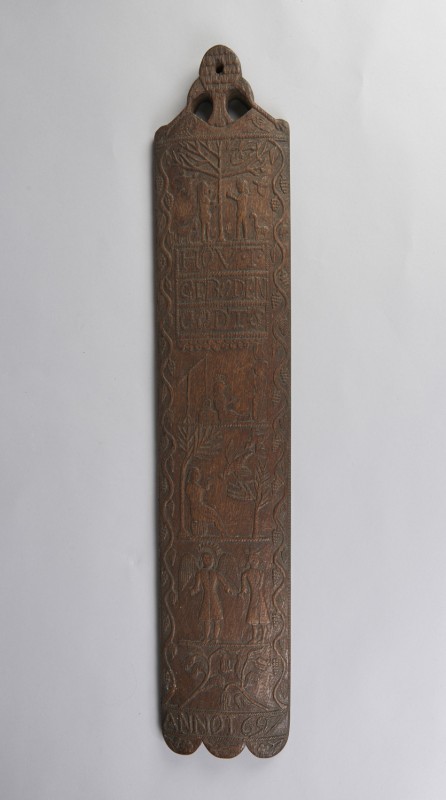 Although the info on Art UK says:

I think that the top inscription is a misreading of: HOV.T. / GEBODEN / GODTS.

I think this is an old spelling of the Dutch ‘Hou t Geboden Gottes’, which would translate as something like ‘Keep God's Commandments’.

The description/title of this piece as ‘Adam and Eve’ only seems to take into account the top image. The others are perhaps other Biblical stories. There is an angel in one, for example.

Could anyone tell us what the object is, what the other panels depict, and confirm the Dutch wording?

Detail views of the different scenes are attached.

"HOUT GEBODEN GODTS" is definitely Dutch, and as you point out, it means "Keep God's Commandments". So both C's should be read as G's.
I can't quite make out the different reliefs from the picture though, so I can't say more.

I quite agree with the translation! You have at hand a Dutch Mangle Board. Detail 2 might well show Rachel at the Well, detail 3 represents Saint Paul the Hermit being fed by a raven, detail 4 maybe the Angel leading Saint Peter.

For those unfamiliar with these once essential domestic items, see https://www.antiquesandthearts.com/folk-art-or-marriage-gift-400-years-of-mangle-boards/ . Berwick Musems may need to have a fundraising campaign to acquire this clearly magnificent and definitive reference book.

The other scenes seem to be:

Detail 2 - Christ and the Woman of Samaria - the well is on the left and the woman on the right has a pitcher on her head
Detail 3 - Elijah fed by the Ravens (?)
Detail 4 - The Archangel Raphael and Tobit (?) - the figure on the right appears to be wearing travelling clothes, including a hat
Detail 4 - obviously plants of some type but not sure they can be identified though they could be shoots of the vines climbing up either side of the piece

Al Brown I suspect those are a better fit for the scenes. The figure on the left in #2 is wearing a crown/halo indicating Jesus and seated on the ground as in the gospel.

In #3, Elijah would be a more common person to be fed by ravens in folk art rather than a fairly obscure saint, especially in Protestant Netherlands. Though Paul the Hermit is associated with palms as shown, that could be more a general indication being in the desert and Paul was only fed by one raven, not plural as here.

If #4 was St Peter being freed, I would expect to see the broken chains and the usual iconography has has him on the ground. Tobias and the angel, a popular image in Dutch art of the time, seems more likely.

#5 doesn't look like any part of the vines. I wondered (given the laundry aspect) whether it was say flax, but that doesn't seem a good match. It's probably just decorative.

As to what, if anything, ties all the stories together, Mangle boards were traditionally proposal gifts: #1 and #4 are sort of marriage related and the Woman of Samaria was much-married. But where that old grouch Elijah fits in I wouldn't know.

#2 - Jesus and the woman at the well (John 4 4-26). Jesus, tired after a journey, is sitting at the well talking to the Samaritan woman.
#3 - Elijah fed by ravens (1 Kings 17). Elijah flees into the wilderness and God commands ravens to bring him bread and meat.
#4 - Tobias and the Angel. This is from the Apocryphal book of Tobit and would have been a better known story then than it is now. The angel Raphael in disguise accompanies Tobias on a journey and helps him to find a wife.
#5 - the plants are not part of the vines, but not sure what they are.