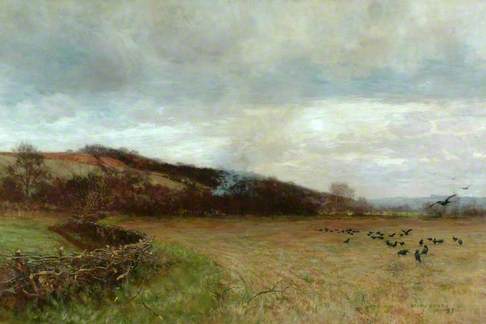 Maud Raphael Jones was born in Bradford. Between 1889 and 1907 he exhibited at the Royal Academy, the New Gallery, the Royal Institute of Painters in Watercolours, the Walker Art Gallery in Liverpool, Manchester City Art Gallery, Grosvenor Gallery and Glasgow Institute of the Fine Arts. He was primarily known for autumnal landscapes in both oil and watercolour. He was related to Frederick Cecil Jones (1891–1956), painter, etcher and teacher, of Bradford and also Leeds.

I think that much could be gained by asking about the artist here, especially in view of the recent success of the Charles Edward Turner thread.

I am the owner of the Fairview Art Collection in Subiaco, Perth, Western Australia.

This discussion is now closed.

Thank you to everyone who contributed to finding a wealth of information on this little known artist, especially to Kieran Owens, Richard Green and Kenneth McConkey, and to Pieter van der Merwe for writing up the biography, which is attached.

I found this webpage about him. Have you seen it?
http://www.marplelocalhistorysociety.org.uk/archives/items/show/1349

The issue of the St James's Gazette, of Wednesday 15th May 1889, carried the following early review of the artist's work:

""March Winds" (at the Academy) and "Near Dinner-Time" (at the Grosvenor), both hung on the line, and the work of a certain Maud Raphael Jones (who, notwithstanding appearances and the catalogue, is not a lady but a gentleman), are interesting, not only for their intrinsic merit, but from the fact that six months ago Mr. Jones was a house-decorator and has received no more instruction in art than is to be gained at a provincial art school in an evening class. The "March Winds" was purchased by Mr. Kendal on the private-view day."

In May 1890, Jones exhibited a landscape at the Grosvenor Gallery's Summer Exhibition, which was praised for its "low tone of colour and great truthfulness to nature as seen in English woods and meadows."

In the same month the artist's submission to the Royal Academy was highly praised, albeit with an unfortunate gender confusion: "One of the most powerfully painted small landscapes in the exhibition is by Miss (sic) Maud Raphael Jones, who has touched a prosaic scene into poetry by the magic of her brush." (Dundee Advertiser, Saturday 17 May 1890. See the attached for the full review). High praise is lavished on other of the artist's submissions to the RA and elsewhere from 1891 onwards.

Jones exhibited at the Royal Academy from 1889 to 1904. Graves, in his RA "Dictionary of Contributors", unfortunately listed the painter as Miss Maud Raphael Jones (see attached).

On the 15th December 1904, Jones was admitted to the West Riding Pauper Lunatic Asylum, at Menston, West Yorkshire. He was discharged, as "recovered", on the 28th February 1905. The shortness of the stay might suggest a case of nervous exhaustion or alcohol recovery.

Under the Summary Jurisdiction (Married Women) Act of 1895, Maud was served with a separation order on the 21st February 1906. As one legal tome explains: "Separation and Maintenance Orders, between husband and wife, are made by Justices of the Peace under the Summary Jurisdiction (Married Women) Act, 1895, where a husband has been convicted upon indictment of an assault upon his wife and sentenced to pay a fine of more than £5, or to a term of imprisonment exceeding two months; or where a husband has deserted his wife, or has been guilty of persistent cruelty to her, or has wilfully neglected to provide reasonable maintenance for her or her infant children whom he is legally liable to maintain, and has by such cruelty or neglect caused her to leave him and live separately and apart from him; or where a husband (or wife) is a habitual drunkard (Licensing Act, 1902, s. 5 (i) and (2))."

In the Leeds Mercury, of Saturday 22nd June 1907, the following was reported:

"Raphael Jones, 44 years of age, an artist, of Market Street, was sent to prison yesterday for three months' hard labour for arrears under the Married Woman's Act. It was stated that he was a good artist, and had a picture hanging at the Royal Academy at the present time. Another picture he had sold for £170."

It might have been this experience that sent the painter into his rest-of-life isolation.

Maud Raphael Jones died at 2, Bridge Street, Ludworth, in Derbyshire, on the 21st April 1935. He probate valued his estate at a few shillings over £74.

Thank you very much. This is the painting I have. Any suggestions of location?

It could be any Scottish highland lake, but given the rather Alpine feel of the distant snow-capped mountains, it could relate to Jones' Royal Academy submission in 1896 of "View from Macugnaga", the latter place being on the Italian-Swiss border in the Central Alpine range.

Thomas, we really only address questions relating to works in public UK collections - that's why we give our time and share our knowledge free. We don't mind you asking a question about the artist of a work that you own where the knowledge you gain also benefits a public UK collection. But in my view it's pushing it to ask us something specific to your painting. It's not even clear that your collection is open to the public in Australia - it's certainly not publicly-owned, as your own website makes clear: https://fairviewofsubiaco.com.au/

Thank you Osmund - I didn't realize those were the rules of this discussion. I do plan to open my private collection to the public. I have found the quality of the information here very good, especially for the book I am writing on my private art collection. We really need a site like this in Australia.

Although I agree with Osmund's points I am sure (Thomas) that your subject is not Macugnaga: that is in a more precipitous mountain valley, no lake that I recall (albeit I was there skiing in deep winter and long ago) and the dramatic view from the village is not down the valley but up towards the Monte Rosa massif. Scotland looks a better bet but it is not a matter for further discussion here.

Sorry, Kieran, to amend slightly your very valuable contributions but, re Jones's RA exhibits, you have inadvertently posted a wrong second column from Graves (relating, in fact, to a Reginald Jones). I attach the correct listing. Our Jones exhibited at the RA from 1889 to 1900 but not in the remaining years up to and including 1904 covered by Graves, and not in 1905 or 1906. He did exhibit there in 1907 -- no.249 'November sunshine', sent from Huntock-house, Brighouse, Yorks -- and that would seem to have been his last RA exhibit (information from the wonderfully useful Chronicle 250 website).

Our Jones consistently submitted to the RA as 'M. Raphael Jones'. This is how his name appears in the main pages of the catalogues, while in all the indexes except one it is given as 'M. R. Jones'. In 1890 only, he was incorrectly indexed as 'Miss M. R. Jones', which would explain the gender confusion on the part of the Dundee Advertiser's reviewer that year. Graves will presumably have been misled by this too, probably in conjunction with the Grosvenor Gallery catalogues of 1889 and 1890, where the artist's name was given in full as 'Maud Raphael Jones' (according to Christopher Newall's Graves-like compilation of GG exhibits),

See attached 'potted life' of Jones, abstracted from what has been supplied above. The question was, 'what more could be found' : even more detail probably could but is what we now have perhaps enough?

Pieter, it might be worth mentioning that this appears to be his only picture in a UK public collection. He deserves more attention as an artist, and a number of interesting things are on Artnet:

The Artnet selection at least shows why he attracted some early exhibition success: good stuff from a painter of modest background and uncertain training, and the Venetian watercolour of 1897 begs a question on his movements, but these enquiries only go as far as contributors produce substantive further information. I expect Marion will note there is just the one work in UK public hands when the matter closes, as she has done before.

A minor point of clarification is that the works Jones showed at the art galleries of Bradford and Leeds were actually in the Yorkshire Union of Artists exhibitions at these two venues (information from 'Painters in the Northern Counties of England and Wales', second edition, Leeds 2002, by Dennis Child).

Thanks Richard: could you indicate date range/ numbers (in brief)?

Following Richard and my references to Dennis Child’s work on the Yorkshire art societies, I’d add the following to what is already known on M Raphael Jones in Yorkshire:

His most extensively recorded exhibits were in the Arcadian Art Club in Bradford in the early 1890s, following the general approval of his pictures at the RA and Grosvenor Gallery.

The club, with Henry Herbert La Thangue as President, and under the patronage of the Mitchell family, and other prominent Bradford collectors such as John Maddocks, Isaac Smith and William Ackroyd, was started in 1886. So far as I can see, Raphael Jones did not show in the early exhibitions, but by 1892 was one of ‘our rising artists’ with six works on display. At that point the club’s annual exhibitions were being held in the British Gallery in Bridge Street, Bradford, and apart from Jones, they featured the work of Arnold and Bertram Priestman, Fred Stead and Arthur H Rigg and one or two others associated with the Staithes Group. Some of the Raphael Jones titles listed in early 1890s reviews, could, I’m sure, be attached to Artnet images and possibly to the Cartwright Hall picture. The most substantial references to the Arcadian Art Club exhibits are found in Leeds Mercury, 29 February 1892 p.3, and Bradford Daily Telegraph, 4 March 1892, p. 4 and 24 February 1894, p. 3.

Being conscious of Osmund’s reminder that this is a private query however, one hesitates to go further at this point.

The reference in Child, 2002, to exhibitions in Bradford and Leeds is one brief and ambiguous sentence. With thanks to Ken for his informative note, it is clear that Jones's Bradford exhibits were with the Arcadian Art Club and not with the Yorkshire Union of Artists. According to surviving catalogues recorded on Copac/Jisc and elsewhere, the latter group (founded in 1888), mounted its first, third and fourth annual exhibitions in York, at the Yorkshire Fine Art & Industrial Institution, in 1888, 1890 and 1891 (presumably a second exhibition being held there too, in 1889). The Union also exhibited at Leeds Art Gallery (founded in 1888 too) in 1888-89 and 1889-90, and at The Spa, Harrogate, in 1893. It probably did not exhibit in Bradford until after Cartwright Hall opened there in 1904. We may assume Jones exhibited with the Union during his years of serving on its committee, 1891-1899, but cannot be sure of the specific showing places. All of this could be boiled down to something along the lines of: 'During the 1890s Jones exhibited regularly with the Arcadian Art Club in Bradford and with the Yorkshire Union of Artists at various locations in the county.'

Thanks for those comments: when this is recommended to close I'll add an updated version (in case anything else appears before then).

Thanks to everyone, Kieran Owens especially and also Richard Green and Kenneth McConkey, for the wealth of information on this little known but clearly talented artist. I think we can now close this discussion and I am sure Bradford Museums would welcome an updated version of Pieter's 'potted life'.

Acquisition method
purchased from the artist, 1898