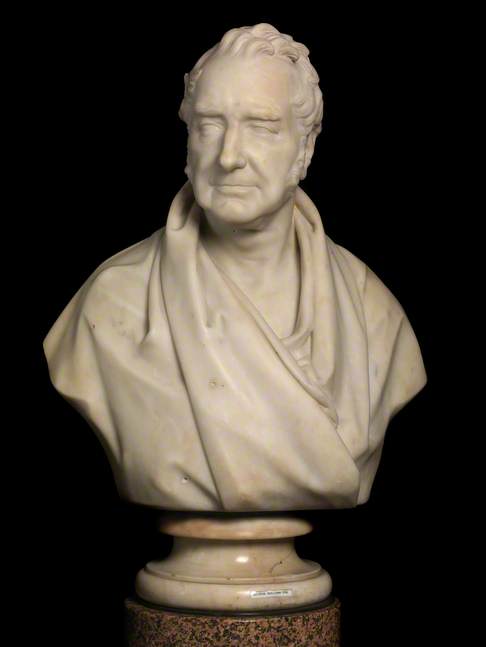 There is another portrait bust in the same collection of instrument maker and optician John Dollond (1706–1761), who invented the Achromatic Refracting Telescope. He was elected a Fellow of The Royal Society in 1761. Inscribed on the back ‘R.J. GARLDAND SC.T. CAMBERWELL.’ [sic]

Richard James Garland was born to William Garland (a stone mason) and his wife Mary Ann, in late 1815 and was baptised at St. Mary's Newington, Surrey, on the 20th February 1816.

Richard James Garland died on the 22nd August 1903, aged 87. His burial record, at Norwood Cemetery, in Lambeth, states that his address was 18, Derwent Grove, East Dulwich, but that his body had been removed for burial from Camberwell Workhouse.

Description
A bust of George Dollond with his head in three-quarter profile to the left as viewed. In the classical style with draped shoulders, he has short hair with side-whiskers. The bust is set on a round marble socle.