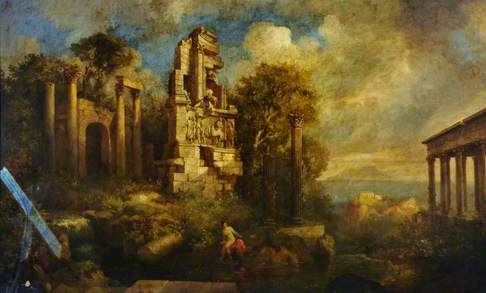 As the collection no doubt realises, this is a capriccio of classical ruins (all in Athens?) with the Philopappos Monument at the centre.

Interestingly, the condition of this monument may help dating the work: it appears from late 18th century to early 19th century pictures – see link – to have been in a better state of preservation at that point. However photographs of it later on show deterioration – note the collapsed central arch – since which repairs have been undertaken. The date of the damage (during the Greek Wars of Independence?) could help provide a date for the source of the representation here.

http://bit.ly/2aNl2QU – there are many other late 19th-century photographs of the site on the web.

This discussion is now closed. This picture has been identified as a capriccio of classical ruins with the Philopappos Monument, Athens at its centre. It has also been concluded that it has no connection to Hubert Robert, other than a generic resemblance in subject matter, and that it should therefore be given to ‘unknown artist’. It can be dated to 1843 or later based on its reliance on engravings by Andrea Gasperini published in that year.

This work has a companion showing the Choragic Monument of Lysicrates, also in Athens.

This is a most interesting lead. My searches found that the monument as Stuart and Revett recorded it in the early 1750s (their original drawing in the RIBA) survived pretty much exactly in that state to the time of Lusieri's painting and one by Louis-Francois Cassas of 1821, one of many versions he did (art market, visible on Artchive.com).

However by the time of a rather crude engraving of 1839 (Alamy stock photo) the depredations had occured that remained apparent in photographs through to the last quarter of the 19th century. The current state, with visible new restoration of the central arch and of the base below the central pillar, is seen in an early 20th century photo http://www.aeria.phil.uni-erlangen.de/photo_html/topographie/griechenland/athen/philopappos/philop1.JPG

The painting in Sheffield therefore looks as if it is based on an image from between c. 1820 and 1920. Given that it was presented to Sheffield in 1935, presumably as an 'old' painting, a date earlier in the 19th century is most likely. At best, it is in the style of Hubert Robert.

To support and perhaps confirm this, the images of both the Monument of Philoppapos and the Choragic Monument of Lysictrates look as if they are almost certainly based on engravings of 1843 by Andrea Gasperini, see http://www.paralosgallery.com/stock_detail.php?stockid=1908 and http://www.nhmuseum.gr/en/fakelos-syllogon/antikeimena/12192_en/

There have been no further contributions recently so I am inclined to recommend that we accept that this and its companion must date from after 1843, given their reliance on engravings published in that year. This also confirms that the attribution to 'style of Hubert Robert' is too optimistic and specific. Even to attribute to any national 'school' seems unreasonable to me - they seem to be fairly amateur-looking works.

This seems fair, sadly. And I agree that they have nothing to do with Hubert Robert - other than some generic resemblance in subject matter - so I would think that, for now, they would have to be given to "Unknown Artist".