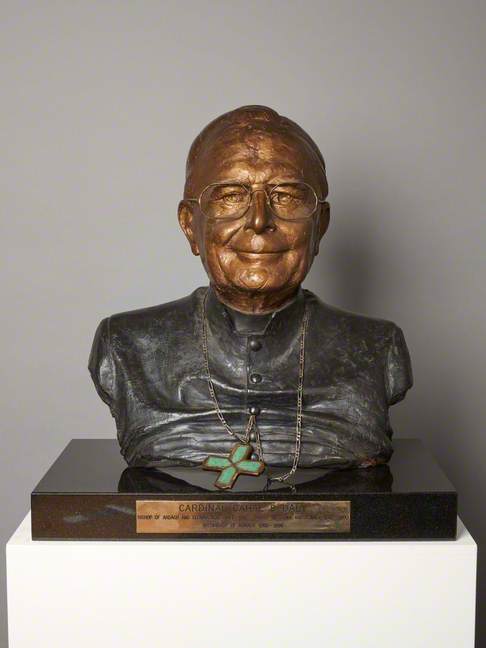 This is signed CM on the back. Could the artist be Carolyn Mulholland (b.1944)?

One of Mulholland's portraits of Seamus Heaney, in the same collection, is also marked CM: https://bit.ly/2NBLGxe

This discussion is now closed. Carolyn Mulholland has confirmed that she made the portrait of Cardinal Cahal Brendan Daly and cast it in bronze.

Thank you to everyone who contributed to the discussion and helped us to trace her. To anyone viewing it for the first time, please see below for all the comments that led to this conclusion.

I can't read the Plate but that Looks like Cardinal Sean Brady. Here they are side by side. https://news.nd.edu/news/seamus-heaney-and-archbishop-brady-to-receive-notre-dame-honorary-degrees-at-dublin-event/ . AS for the Artist That bust is the complete opposite of CM's style. https://artuk.org/discover/artworks/seamus-heaney-19392013-255690/search/actor:mulholland-carolyn-b-1944/page/1/view_as/grid

All of Mulholland's work is not in the same style. See below:

Here is a bust by Mulholland also using a two-toned approach:

Here is a Mulholland bust of Mary McAleese:

The attribution of our bust to her seems reasonably plausible, but surely there is a record of the commission of this 1996 work at Queen's University or the Belfast Catholic authorities (this bust or another version of it was or is in St Peter's Cathedral there).

I meant to include this link in my prior comment:

It's hard to assess it on stylistic grounds, so varied is Carolyn Mulholland's output. But according to her very full CV in the catalogue for the 2000 Carlow Art Festival, she did indeed sculpt a portrait of Cardinal Daly in 1996: https://bit.ly/2Rr7Zqx (Go to page 17 of the pdf, which is not word-searchable).

With the right sitter, the right date and the right initials there is no doubt in my mind that Andrew's suggestion is correct.

That's quite good enough for me, Osmund.

The artist Carolyn Mulholland has confirmed to me by email that this 1996 bronze bust of Cardinal Cahal Brendan Daly is her work. It, and the one in St. Peter's Cathedral, Belfast, was cast at the Bronze Art foundry, on Gaelic Street, Dublin. - http://bronzeart.ie

Carolyn Mulholland confirmed that to me today too, Kieran. She added that Cardinal Daly ordered seven copies.

Unlike some, this one is quickly wrapped up, the sculptor in question Carolyn Mulholland being very much alive and able to answer for herself. It has been noted that while she has a distinct style it is also very varied, and attributions on style alone might not be easy for future generations. The polychromatic patination of the bust and the post-casting additions of spectacles and pectoral cross and chain place it firmly in the late 20th Century. An early example of attempts to animate a bronze in this way was Elizabeth Frink's portrait of Sir John Pope-Hennessy (1975–1977), when a pair of his own spectacles were added to the finished portrait.

The case clearly demonstrates what is a perennial problem, particularly for sculptors: the failure of collective memory when it comes to names, and a scant regard for record keeping.