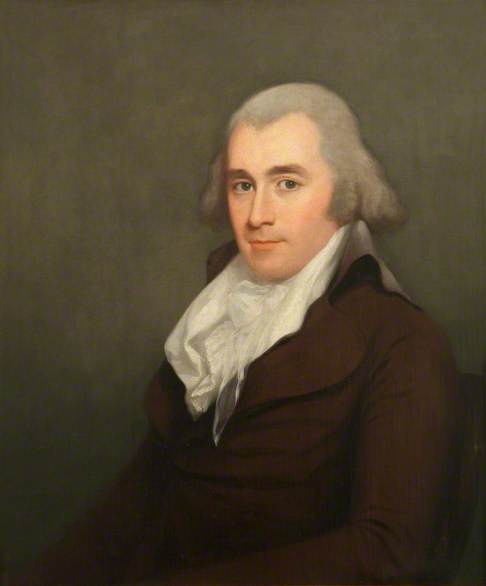 Was this perhaps painted by Robert Home?
https://artuk.org/discover/artists/home-robert-17521834

According to the painting description, it is doubted that Scottish-born Alexander Russell (1715–1768) is the sitter for this portrait, as the features here are inconsistent with the well-known engraving after Nathaniel Dance by Thomas Trotter.
https://bit.ly/35Egfc2

The portrait is thought more likely to be a man from a later generation of the Russell family.

If this is by Home, it seems above his average level.

I have to agree with Jacinto, if this is by Home it's the best portrait he ever painted. Besides his own. https://www.npg.org.uk/collections/search/portrait/mw03219/Robert-Home?LinkID=mp02250&role=sit&rNo=0 and there are no similarities. Too much Normal Guy Character exuding from the painting to be Reynolds. Romney wasn't this good not with Men anyway. Not painterly enough for Gainsborough. Should I point out it feels American. Just a Guy in his Best Coat and Shirt with a pleased look on his face.
It Could be Sir Henry Raeburn. It's of that quality. But even Raeburn's regular guy portraits have a feel about them that's lacking here.
This is an engraving that purports to be your suggested sitter. https://upload.wikimedia.org/wikipedia/commons/c/c4/Portrait_of_Alexander_Russell_by_T._Trotter_Wellcome_L0011163.jpg

Input from a costume expert to narrow down the date would be of use.

Whilst waiting for a Costume Expert I Looked around some more. Yeah I Know I don't have a life. Anyway,lol. Take a look at his self portraits as well as some of his portraits. Notice the same green in the background and the faces that look present and not about to go off and conquer the world. He appears to be mostly forgotten. He Trained in London, very talented, and then moved back to the Midlands. https://artuk.org/discover/artworks/search/actor:wright-of-derby-joseph-17341797/page/7 and the winner is Joseph Wright. Maybe.

From my experience as a curator at the National Portrait Gallery, this portrait can be dated to the 1790s from the style of the neck tie and the hair. To return to the original questions for this discussion:

Who is the sitter, if not the physician and naturalist Alexander Russell (1715–1768)? As stated at the outset of this discussion, the portrait is probably of a man from a later generation of the Russell family. It has a Russell provenance. I propose to keep this discussion open until the ‘sitter’ files at the National Portrait Gallery, in particular the Russell files, become available for consultation again.

It's difficult to be sure without a much better image but it certainly seems to me as quite likely to be Robert Home. I have handled a number of his portraits over the last 10 years and this looks quite plausible. His style was variable without doubt and some of his portraits are much better than others. I think it will date to the mid 1790's the clothes almost identical to the portrait of Bazett (link below) which was painted either 1795 or 1796.

The fact it has a Russell provenance would be enough to do a quick check in Home's sitter books at the NPG for a sitter fitting the dateline and the possible surname name. It would be a start at the least.

A couple of Home's to compare:

I would agree with Miles that this is by Home. Yes, Home's sitter book is the next place to check.

From the dress and hairstyle I think this portrait dates from the early to mid 1790s. Compare for example Wright's picture of Samuel Oldknow:

One obvious candidate would be Sir William Russell:

who I think is the of the same family (the Russells of Roseburne) as Alexander Russell who this was traditionally identified as. He was born in 1773 and after qualifying at Edinburgh went to Calcutta to practice. This would probably at the age of 20-21, so in 1793-4 which would tie in with the dress.

Of course Home is in India from 1791 and in Calcutta from 1795, so this could have been painted there, fairly soon after. And it being a portrait of an eminent physician also explains why it was given to the RCP - even if which Dr Russell it is has got lost since.

Sir William's baronetcy died out in 1915 with the death of his grandson, but the Misses Russell who donated it could be the latter's daughters and/or nieces (his brother died in 1914).

I made my previous post before I had another good look at the two portraits that Miles Barton linked to above and I hadn't realised just how much they reinforce the date and Indian setting of this portrait. The picture of Richard Campbell Bazett in particular shows identical dress in colour and shape: same coat in the same colour with the same collar and large flap at the back; same white lining; same neckwear; same haircut. Edmeades' is also similar, though you can't see if there is a flap. If the East India Company Service didn't have a uniform for their officials there was clearly a 'look' they were supposed to have.

The only difference is that this sitter's is powdered (as is Edmeades' in the other portrait). That big flap seems to have been to protect the clothing from powder during wear. But using hair powder went rapidly out of fashion from the mid-90s as looks became ever-more 'natural' and in response to Pitt's tax of 1795. So again we are looking at that sort of date for the portrait.

The Russell family tree has the usual problems for the period and social status (large numbers of children from several wives over long periods; same forenames used again and again; cousin marriage) but I reckon this (later Sir) William was the nephew of the Alexander this was previously said to be. The large generation gap is because this William was the baby of the family, born when his father was 61. Confusingly the sources also give an older brother called William (b 1755) described as a 'surgeon in Edinburgh', possibly just deceased before the birth of this one was born, though about 18 would be youngish to qualify and practice.

I suppose this could have been painted before Russell left for India, but otherwise Home would be the obvious contender to have produced this (Hickey is elsewhere 1791-8). The only objection is that given above - that it would have to be the best thing he ever produced, but then something has to be. It may be he was doing his best to impress in a new market or that this has been particularly well looked-after.

Description
This portrait is traditionally said to be of Alexander Russell (1715–1768), a Scottish-born physician who settled in Aleppo, Turkey. Russell learned the Turkish language so that he could treat Franks, Greeks, Armenians, Jews and Turks, and as a result was treated with respect by his new community, unusual for a foreign settler in non-Christian lands. When he returned to London, Russell gave advice on how to prevent the spread of the bubonic plague that had just broken out in Lisbon. He was elected physician to St Thomas’s Hospital, London, in 1760, where he served until his death in 1768. It is doubted that Russell is the sitter for this portrait. Firstly, the doctor’s features are inconsistent with those in an engraving. Secondly, the age and costume style indicate that the sitter is perhaps 30 years old, too young to be Russell. The portrait is probably of a man from a later generation of the Russell family.