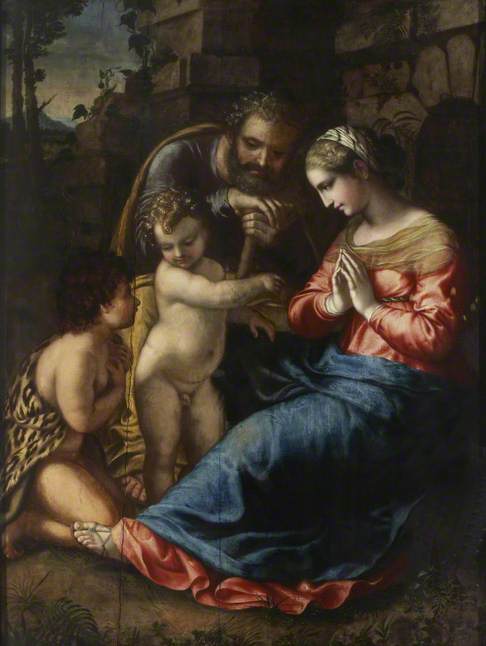 It should be possible to say more about this fine painting. It is worth following up the suggestion that it dates from a century earlier than Giovanni Battista Salvi de Sassoferrato (1609–1685), as previously thought.

According to NICE Paintings, the dense composition recalls the work of Raphael and Giulio Romano. That record records it as 'Central Italian School'.

Other possibilities to consider would be artists in the circle of Parmigianino or Correggio.

This Looks like the same model from another Parmigianino. https://www.wikiart.org/en/parmigianino/virgin-and-child-1527

Mary's face is simply Raphaelesque, which could go with a 16th century (or later) Italian picture by various people. This painting does not look Mannerist enough for Parmigianino to me. Early Giulio Romano is one possible consideration.

The composition is also Raphaelesque. Compare below:

Here are two pictures by Giulio Romano, a pupil of Raphael:

This is surely a derivative painting – not in itself by any means ‘fine’ though perhaps based on a fine original composition. The muddled area between Christ and St John, for example, characterises a struggling replication in two dimensions of what we might assume to be the convincing three-dimensionality of the source.

A 1543 Primaticcio (pupil of Giulio Romano) for comparison:

I think the picture is probably 16th rather than 17th century, and "school of" or "follower of" Raphael seems reasonable.

A late Raphael (some say Giulio Romano after a Raphael design):

Jacinto, the Primaticcio is actually a Poussin. But a distant follower of Raphael - after Primaticcio, Penni, Perino, etc - is likely.

Worth noting this a quite a substantial panel painting.

You are correct, Al, and I should have questioned the wrong attribution in that link. The solidity of the figures alone should have made me suspicious. Poussin, of course, was influenced by Raphael.

I suppose the size may indicate it was painted for a church or other religious space, or some sort of public space.

Well, actually more like a chapel, I suppose; it's about 5 by 4 feet.

Yes, the composition is Raphaeleque, but I'm guessing that Chiara's suggestion of the Parmigianino connection is due to details like the infant Jesus's hairstyle (with long curls including one over his forehead) and John the Baptist's leopard skin. You'll find both details in the National Gallery's https://en.wikipedia.org/wiki/Vision_of_Saint_Jerome, and the hairstyle is typical of Parmigianino's infants work ( but not of any of Raphael's followers that I'm aware of -though I haven't searched). That, and the reasonable but not especially high quality of the work might suggest a conservative painter working in the 1530s.

Similar curls are present in the infant Jesus of the late Raphael linked above, which I will link here again:

Sassoferrato, of course, was a 17th century throwback to Raphael, which no doubt explains the former attribution. However, this picture feels more like Raphael than like Sassoferrato, meaning it feels closer to Raphael's time, which is why I would favor 16th century.

Sassoferrato did copy known Raphael compositions or used them as starting points for works derived from them. Here is an example:

However, they still have his peculiar "feel" to them, which I do not really think our picture does.

Also, Raphael had an unusually large workshop with many pupils and assistants (around 50, according to Vasari), and there were also bound to be less direct followers and imitators.

Here is the Raphael (and workshop) from which the figures of the Virgin and St John appear to have been lifted:

If absolutely forced to give it an attribution, I wouldn't go stronger then 'Manner of Raphael' or 'Follower of Raphael'.

Yes, "school of" or "follower of" Raphael is appropriate.

'School of ...' suggests a contemporary of ..., so I think 'Follower of Raphael' would be most appropriate for this painting. It was given to Inverness Academy by James Clark in 1804. See entry on NICE Paintings, which notes that the donor was a skilled copyist himself- perhaps it is actually by James Clark? In which case it could be as late as the 18th century. Stylistically (e.g. the Virgin's profile) I feel this is not impossible.

Apparently Clark in his will believed it to be by Sassofarato, so presumably not by him!

Is this James Clark the same James Clark (artist of Scottish origin) who was in Italy assisting Lord Hamilton in acquiring and shipping artworks back to England? (late 1790's)-

Probably so, Louis. Clark was a dealer in Greek vases in Naples.

So James Clark was probably an honest person who knew his stuff! So obviously he thought this was a quality original.

I wouldn't assume that Clark was an honest and informed dealer in old masters, without evidence. I am not saying he wasn't, but the art market then (as now) was very dodgy. Hamilton was principally a collector of antiquities, including pillaging tombs himself and probably illegally exporting Greek vases, and other antiquities (a third of his collection was lost at sea on its way to Britain). The vases may have been authentic but the 'Warwick vase' is famously over-restored. There are academic books and articles on Hamilton which would need to be consulted before reaching conclusions about James Clark's abilities as a connoisseur. Clark's attribution of this painting to Sassoferrato has already been doubted in this discussion.

Clark is briefly metioned in David Constantine's 2001 life of Hamilton ('Fields of Fire') p. 219 as 'the painter and antiquary' who acted as agent in packing up Hamilton's second collection of antiquities, mainly ancient vases, for shipment home in the 74-gun 'Colossus', courtesy of Nelson, as the French advanced on Naples in the autumn of 1798. In fact not all - and not the best - were loaded in that ship, apparently owing to some misunderstanding, so it was not those,later largely bought at Christie's by the collector Thomas Hope, that were lost (and not all were even then) when 'Colossus' dragged her anchors and was wrecked on Samson, Isles of Scilly on the way home. There may be a bit more on Clark in the BM's Hamilton exhibition catalogue (though my copy is buried somewhere). As regards both Hamilton and Clark, I think its better to remember that 'archaeology' had not really then begun and Hamilton at least is part of its foundations, even if the sort of 'excavation' then being officially sanctioned at Pompeii in particular was little better than the straight tomb-robbing all round that was not: I expect they both bought from looters -as still happens until it's found out - but Hamilton acquired a lot quite properly at the time: 'the past is another country' etc. The key point in this painting's context is that it appears to be 'old master' work, not a copy by Clark-even if he misattributed it.

I expect Clark believed this was a Sassoferrato and was very proud of having acquired it and of leaving it to his native Inverness. Needless to say, misattributions happen, even in the best circles.

O.E. Deutsch, ‘Sir William Hamilton’s Picture Gallery’, Burlington Magazine, Vol. 82, No. 479, Feb 1943, pp. 36-39, 41. This publishes the ‘Catalogue of the Pictures, Marbles, Bronzes, etc. The Property of the Right Honble. Sir William Hamilton, … Packed at Naples in Octr. Novr. & Decr. 1798. Under the Direction of Sir William’s much obliged, and most obedient humble servant James Clark’. Clark is mentioned as a copyist in this list and in the second of two Christie’s sale catalogues of the Hamilton Collection in Spring 1801:

Getty’s Provenance Index notes: “This was the second sale of pictures (and a few drawings) from the collection of Sir William Hamilton, the first having been held on Mar.27/28 (no.19). The sale was clearly intended to include the less desirable works, among which were a large number of view pictures, as well as many copies. It appears that very few reserves were put on the paintings in this sale since only three were bought in, but the prices were generally very low and only two exceeded £20. One of these was a pair of Venetian views said to be by Canaletto, and the other a copy after Correggio's Marriage of St. Catherine. The sale did contain works attributed to major artists, but from the prices they fetched it seems that by common consensus the attributions were not reliable. (B. Fredericksen)” Actual catalogue viewabe at http://portal.getty.edu/books/gri_9926474930001551

In Paola Mangia, 'Canova: Artists and Collectors: a passion for antiquity', 2009, there is, according to Google’s snippet view, “Correspondence between Charles Townley and Rev James Clark” in the Townley archive. Is the same James Clark?

Letters by Clark are in the Charles Townley archive. See Susan Hill’s 'Catalogue of the Townley Archive at the British Museum' published by BM, 2002.

Library closure makes it hard to view any of these.

I should have mentioned that Clark's two drawings of the Venus are illustrated on p. 292 of Didero's book, of which as surpising proportion is accessible on Google Books. Has anyone found any other images of Clark's work as an artist?

Has a high resolution image been made available?

Nicolas, our image doesn't help. It would have to be photographed again at much higher resolution.

Agreed. It would be worth it. I'm sure you agree it's a great painting

Title
The Holy Family with Saint John the Baptist

Description
This painting hangs in Inverness Town House, at the top of the staircase. It was believed to be by Giovanni Battista Salvi de Sassoferrato (1609–1685) but it is now thought to have been painted a century earlier. The artist is unknown. The painting was bequeathed, along with a considerable sum of money, to Inverness Academy by James Clark. James Clark was born in Inverness in 1742, the son of John Clark and Mary Mackintosh. He studied art in Italy, finally settling in Naples where he died in 1800. There was considerable opposition when, in 1845, the Academy considered selling the painting; at that time it was still believed to be by Sassoferrato.