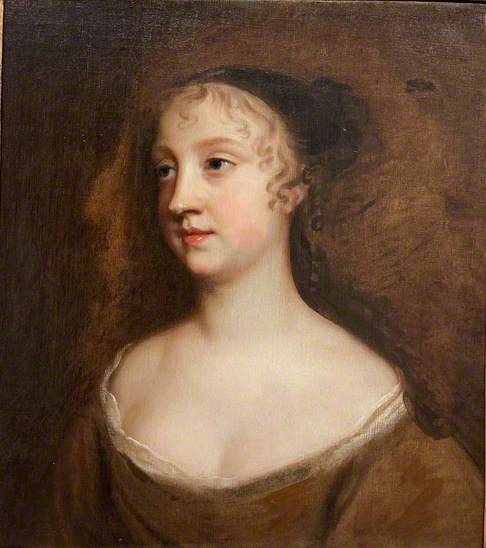 West Suffolk Heritage Service has acquired this portrait by Mary Beale through the auspices of the Art Fund. No attribution to the sitter has yet been made to our understanding. Having undertaken some elementary detective work of our own we discovered the sale of a Peter Lely portrait at Sotheby’s in 2009, of Alice Woodforde (image attached), which bears some similarity, and wondered whether greater experts amongst the Art Detective community would agree? This does call into question the estimated date, due to Alice Woodforde (née Beale’s) early death in 1664, following the birth of her son, Heighes.

We have checked the reverse of the portrait (as it is currently held in store) and the only perceptible marking is a stencilled ‘DD964’.

The Lely sitter looks like a rather grand lady, compared to the much plainer and simpler depiction by Beale. Does Lely's depiction fit the status of Alice Woodforde? Could the identification be wrong?

The picture looks unfinished and relatively informal, suggesting it may not have been a paid commission from someone outside the circle of Mary Beale's family and friends, and also suggesting it may date from before the 1670s, when she began painting professionally for money. The sitter's apparent age would suit Alice Woodforde, though obviously it could be another young woman.

Tabitha Barber's catalogue for the Mary Beale exhibition at the Geffrye Museum in 1999 (p. 64) states that the Rev Samuel Woodforde commissioned Lely to paint his wife's portrait. Completed posthumously, Mary Beale and her cousin 'Mall' Smith acted as models. Barber states that an illustration of the portrait believed to be it was reproduced in Dorothy Woodforde's 'The Woodforde Papers and Diaries', 1932. Without access to this volume, I'm presuming that it is the portrait of Alice reproduced on this site: https://www.woodforde.org/gallery/ The portrait (also attached below), shows a woman in the same dress and pose as the Sotheby's painting, but with a markedly different face and other subtle differences within the composition.

Barber also references a miniature within the V&A by Thomas Flatman of an unknown woman, thought to be Alice Beale:
https://collections.vam.ac.uk/item/O81968/unknown-woman-perhaps-alice-beale-portrait-miniature-flatman-thomas/

A note on the Dulwich Picture Gallery's RKD Studies states that Lely's portrait of Bartholomew Beale (acquired by Dulwich in 2010) has a similar frame to the Sotheby's portrait, as does another by Lely of a 'Boy as a Shepherd' (also in the Dulwich collection). It is suggested that all three paintings were together in the collection of Edward Lovibond during the 18th Century, where they received comparable frames. "There is no evidence that they were united before the Lovibond collection, or whether they were identified as portraits of Beale family members."
https://dulwich-picture-gallery-i.rkdstudies.nl/jonson-lingelbach/peter-lely/

Also worth mentioning is a footnote in Dr Bendor Grosvenor's catalogue for the 'Bright Souls - The Forgotten Story of Britain's First Female Artists' exhibition (Lyon & Turnbull, London, 2019) where he states (p. 26, n. 21) that in addition to her painting of 'The Young Bacchus' there is "a record of Mary Beale painting Alice Woodforde as an 'Artemesia', the only other known instance of her painting a mythological subject." He doesn't state which Alice Woodforde was the model, as Mary Beale is also known to have painted Samuel and Alice Woodforde's daughter, who was also named Alice.