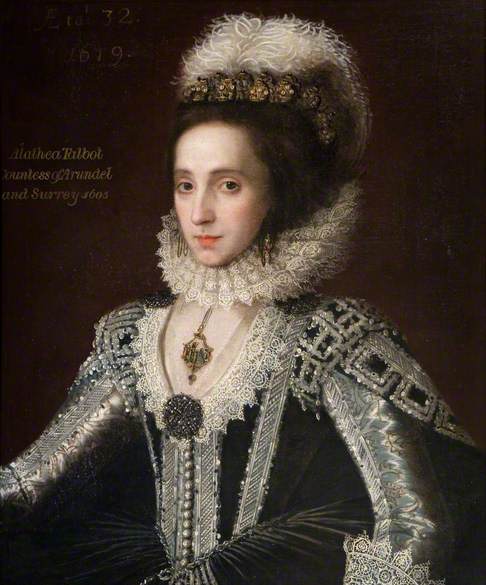 I don't know which of these inscriptions is original. If the inscription ‘Aetat 32 – 1619’ is the oldest, Alethea does not look like the portrait which Rubens paints next year, in 1620 (Museu Nacional d'Art de Catalunya) https://bit.ly/3r33ggb [and Alistair Brown, Art UK, additionally adds Alte Pinakothek https://bit.ly/36mckTR in Munich]. We do not know precisely when Lady Arundel was born. Mary Worth was born in 1587, so she was exactly 32 in 1619. On the other hand, the attribution to Alethea could be possible if she was painted younger. She used to wear that kind of jewellery with the letters IHS she was wearing at her breast in the portraits by Rubens and Mytens (c.1618) https://bit.ly/2VhGipL.

Alistair Brown, Art UK added: ‘One other online comment suggests this could be Lady Mary Wroth - based on what appears to be an original inscription https://bit.ly/3xsDJQ1’

You may well be right. The inscription claiming that this is Aletheia, countess of Arundel in 1605 is certainly suspect. It is not in a contemporary hand, and Aletheia did not marry Thomas Howard, earl of Arundel until the summer of 1606.

I personally am rather more interested in who painted this highly accomplished portrait. One possibility is Daniel Mytens, whose first important patron in London was Thomas Howard, Earl of Arundel. His known portrait (c. 1618) of Alathea, Countess of Arundel, is below:

Robert Peake has also been suggested as the potential artist here, but while that is not out of the question, I find him less likely.

Unless Lady Mary (Sidney) Wroth was a Catholic, would she have worn an IHS jewel as in this picture?

Paul van Somer the most likely artist of those suggested. Not Larkin, Johnson or Peake.

Jacob, what do you think about Mytens?

It is a tricky one. Attached is a composite between our portrait and one by Van Somer on ArtUK, a full-length described as Portrait of an Unknown Lady, Paulus van Somer I (1576–1621) (style of), National Trust, Penrhyn Castle.

Except that I have taken a detail from the full-length and reversed it.

I think that our portrait is a fragment of a larger picture. Arms were never cut off in this crude way in portrait of the period. I think that the Aetat 32 – 1619 is a copy of the original inscription.

Our portrait is by or after Van Somer, I suspect.

To my eye, if this is by van Somer, the face is above his usual level. It is a rather intense face, which would appear to go rather better with a woman like Mary Sidney/Wroth than the Countess of Arundel, but that is hardly proof.

I discussed this portrait with my former PhD student Chris Higgins back in 2016. The current identification to Aletheia, countess of Arundel, is unsustainable, but as Ingestre Hall later became a Talbot property, the sitter may nonetheless be a Talbot lady. Looking for one such, qualified as possibly ‘Aetat 32/ 1619’, there is the relatively overlooked first cousin of the celebrated three Talbot sister-countesses: Gertrude (b. circa 1588), da. of Henry, younger bro of Gilbert and Edward, 7th and 8th earls of Shrewsbury. She married Robert Pierrepoint, later 1st earl of Kingston upon Hull. The Pierrepoints were fervently Catholic, which accords with the IHS jewel. There are few known records of Gertrude, though the diarist of Ben Jonson's walk to Scotland notes her at Welbeck when Jonson dined there, referring to her as ‘Mrs Purpoint’, possibly not a Jac spelling variation but a pun, particularly if Gertrude had a reputation as a fancy dresser, a purpoint being a high-fashion quilted doublet (N.B., Mary Q of S, described at her execution: 'Her purpoint was of black figured satin'). Chris, at the time, drew my attention to its likeness to the sitter in the Penrhyn portrait, which is indeed persuasive. By/after Van Somer.