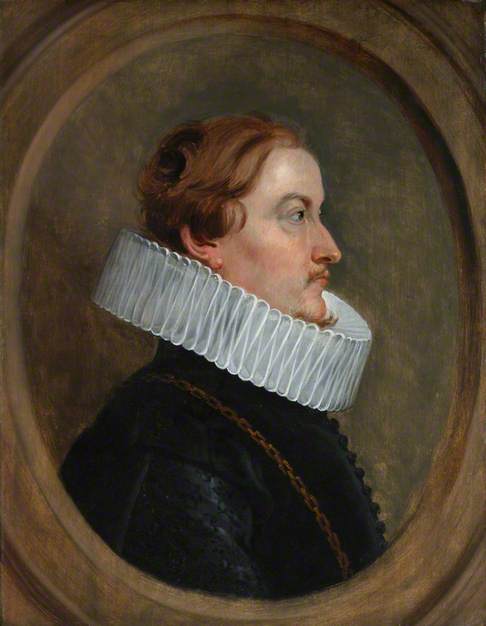 The etching by Johannes Meyssens shows a very similar looking sitter. A work in the Lviv Art Gallery in Ukraine suggests this too could be a portrait of the same sitter. Finally, anther portrait, which is in a private collection, looks to be again the same sitter, and is even closer to this portrait.

This piece https://bit.ly/2RAButb by Svitlana Stets, a curator/researcher at the Lviv National Art Gallery, says that their 'Rubens' work had by 2012 already been re-attributed to van Dyck and also identified as being van der Ee. I'm not wholly convinced that it is the original of the Myssens print, but it may be. The third one you mention "in a private collection" is I think just a rather poor copy of the Lviv painting (or another version of it) - is that the date '1846' on the right?

I can't, though, see our (NT/Cobbe Collection) sitter being the same man at all. A wise and experienced head observed here during a long and inconclusive C17th portrait thread** a year or so ago, that there is seldom much point in a "looks-like" approach to portraiture without documentation or other supporting evidence - and that becomes truer the further back in time you go. I don't think the faces of the two men look enough alike to make a convincing case; but that is just my subjective visual opinion, and Peter will doubtless disagree.

However, it is sometimes possible for a clear and simple physical detail to rule someone out: surely our sitter's *very* red hair (and beard) means he cannot possibly be the dark-brown-haired man in the Lviv portrait?

**https://bit.ly/2RAButb . I suspect the memory of that exhausting marathon may be restraining people's interest in this thread - it certainly did mine!

Sorry, got my links mixed up (and unspaced).

I tend to think this is not autograph van Dyck, at least not entirely, and possibly not at all. I do not have the Yale van Dyck catalogue at hand, so can someone who does tell us what it says about this piece?

To answer my question from 8 months ago, the van Dyck catalogue raisonné by Barnes et al. (Yale Press) does not include a picture that matches this one, not even as a source or model for a lesser copy (which I thought this might be).

It does include several portraits of men in similar format and dress from van Dyck's second Antwerp period (c. 1627-32), but they are all clearly superior to ours. One of them is below (although the prime version is apparently in Dresden):

Another point is that the medal or coin-like full profile format is unusual for van Dyck. Only one of the aforementioned portraits uses it, and the collar in that picture is completely different.

While I do not presume to be an expert, and someone like Bendor Grosvenor would know better, I cannot believe this picture is autograph van Dyck. It is waxen and stiff, and not especially accomplished technically, albeit competent.

For what it's worth, I could not find the Lviv portrait discussed above in the van Dyck catalogue raisonné, and while at least the face is better or more van Dyck-like than in the Hatchlands picture, I would want someone like Susan Barnes to confirm the attribution.

Acquisition method
on loan from the Cobbe Collection (accession no. 434)