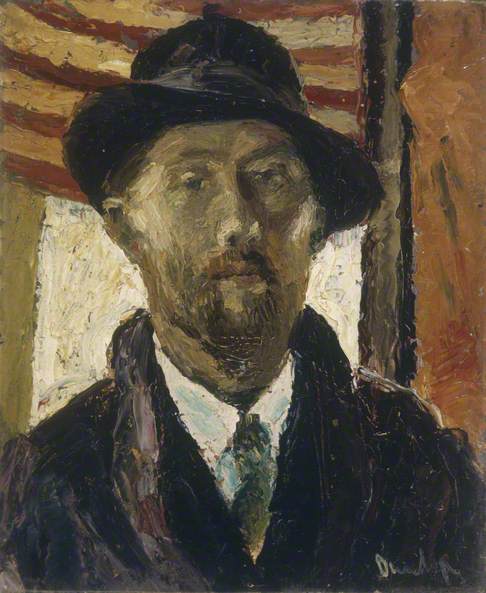 This discussion is now closed. This has been identified as a self portrait by Ronald Ossory Dunlop (1894–1973).
Thank you to everyone who contributed to the discussion. To anyone viewing this discussion for the first time, please see below for all the comments that led to this conclusion.

The collection comments: 'Thank you for pointing this out. While the strong likeness between the two works appears convincing, and suggests that you may be correct, there are no labels or inscriptions on this work that would confirm it is as a self-portrait.’

There are four additional self-portraits by Dunlop on Art UK:

Presumably someone can put together a side-by-side gallery.

Dunlop painted a good number of self portraits in which he is usually depicted wearing a hat. A link to one such portrait is given below. That work is titled and was exhibited as a self portrait at the New English Art Club in 1944. In my opinion the painting in the National Museum of Wales is likely to date to the late 1930s. The signature is very typical of the one he used at that time and the colours and brushwork are consistent with such a date. I believe that it is undoubtedly a self portrait.

Ronald Ossory Dunlop was born at No. 71, Drumcondra Road, in Dublin, on the 28th June 1894. He was the son of Daniel Nicol Dunlop, "a Scottish entrepreneur, founder of the World Power Conference and other associations, and a theosophist-turned-anthroposophist" and Eleanor Fitzpatrick, the daughter of Richard Henry Fitzpatrick, a Church of England Protestant and merchant tailor of Dame Street, Dublin. This Richard was also a sometime-poet ("Lyrics", 1895) who later moved to "Kincora", Great Gregory's Road, in Stratford-upon-Avon, were he edited a short-lived quarterly journal entitled 'The Shrine'.

Ronald's parents, Daniel (described as a "Tea & Wine Merchant" on his marriage certificate, and as a "Clerk" in the 1901 Irish Census) married (by licence, probably due to religious differences) Eleanor on the 12th August 1891 at the Dublin Registrar's Office.

In the year of his election (1950) to full member of the RA (of which he had been an ARA since 1939), the Yorkshire Post and Leeds Intelligencer, of Wednesday 15 March, wrote about Dunlop that "Now 56, this bearded artist has painted nearly 100 self-portraits. He usually paints in oils with a palette knife and thumb."

Between 1937 and his death in 1973, Dunlop exhibited 211 paintings at the Royal Academy, usually having six works accepted every year. Out of all of these works, only 16 were obvious self-portraits. These were:

Attached is a composite of Dunlop's known self-portraits (with our discussion's painting place top left corner), showing dates of works when known. It would seem fairly certain from a comparison of the earlier and middle paintings that ours is a self-portrait of the artist. The newspaper photograph of Dunlop's "Myself With Yellow Scarf" appeared in the Illustrated London News of Saturday 2nd May 1953.

Kieran has put together a convincing case that this work is a self portrait by Dunlop. I agree with his comments fully. However, it is understood that the collection has reservations due to the absence of labels or other firm evidence. In order to make progress would it not be appropriate to suggest that the title be amended to: 'Portrait of a Man, Bust Length, believed to be a self portrait of the artist'.

Another R O Dunlop self portrait was sold today at Bonhams, London (lot 158). The link is below.

Please take a look at this R O Dunlop self-portrait at the Art Gallery of Greater Victoria. I’m sure it is the same man, in the same hat.

I have attached a composite of the Art UK portrait in Wales and the Dunlop self-portrait in Victoria, B.C., Canada, that I mentioned above. Note that I cut off the sides and bottom of the second portrait for ease of comparison. In my opinion, while the two hats are different (but at the same jaunty angle), the sitters portrayed are the same man (Dunlop).

Like Grant and Marcie, I'm convinced that this is a Dunlop self portrait. These comparisons are compelling evidence in themselves, aligned with Kieran's research.

I agree: it's an overwhelming balance of probability both on the visual parallels and documentary record of the number of self-portraits he is known to have painted. The collection wowuld be remiss not to at least register that in the headline title (as Grant has already suggested, or some variant). Perhaps it could also confirm there is no provenance before the donor, Mrs Green, since -labels or not - it might have been an exhibited one.

I have asked the Collection to review the submissions to see if reservations remain on this being a self portrait by Dunlop, and if so, to give consideration to Grant Waters' suggestion from 3 February this year.

Elin Jones has added her backing to the consideration that this is a self portrait by Dunlop:

'Attached, are photographs of Ronald Dunlop taken in 1940 in his studio in Leatherhead. He had been living there for two and a half year with his actress wife Rosalind Iden.
https://artuk.org/discover/artworks/rosalind-iden-19111990-54376/view_as/grid/search/works:rosalind-iden-19111990/page/1

The photographs were published in the Tatler and Bystander on 20th Nov, 1940. The first photograph shows him in his studio, at his easel, painting a portrait that I don’t believe has been included on the thread. Although the focus of the photograph for me isn’t necessarily the portrait on the easel, but rather the reflection in the mirror. It could be due to the way that I’m personally processing the image, but I feel that the reflection is very similar to the portrait of this discussion as well as another self portrait in the Ulster museum, which also includes the slightly raised left eyebrow that can be found in a number of Ronal Dunlop’s self portraits. There is also a vacant space behind the hat in the reflection. The photographs in the article help give an idea of Dunlop’s methods and immediate working environment.

The artist isn’t looking in the mirror, but at the work in progress on the easel. The vertical lines on the (it’s) left of our portrait could be a result of the light bouncing off the inset and frame of the window. Although we do not see this source of light, we can imagine the internal layout if we consider both photographs of the studio, and compare the internal view of the the open fire and light-source and place it in relation to the placement of the chimney and window in the external view.

As impossible and as unlikely a suggestion as this may sound, I ‘d personally also quite like to think that the deckchair propped up against the wall to the left of Ronald Dunlop with it’s light and medium tones of grey, in reality, comprised of a striped material made up of in shades of red, white and yellow. Very much like the pattern used to fill in an otherwise vacant space in the background of this portrait.'

Dr. Jennifer Dudley, Curator: Art Collections Management and Access, National Museum Wales has commented: 'It seems there is a very strong case indeed that this work is also a self-portrait. Thank you to the Art Detectives for putting together such great composite images! For the title to give the work and looking at the list of titles that Kieran kindly provided, I wonder if ‘Portrait of the Artist, Bust-Length’ may be most appropriate’

That’s good news. A better title might be “Portrait of the Artist, Wearing White Shirt and Black Hat”.

Ronald Ossory Dunlop, RA, is known to have painted a considerable number of self portraits. As Kieran Owens noted in his post of 23rd August 2019, The Yorkshire Post & Leeds Intelligencer newspaper of 15th March 1950 reported that Dunlop had by that date 'painted nearly 100 self-portraits'. Although many of his self portraits were from the late 1930s and the 1940s, it is known that he continued to paint self portraits during the 1950s and the 1960s, including as Marcie Doran noted on 16th August 2021, at least one in Canada, where he had several solo exhibitions in Vancouver. A check of auction records also reveals a large number of other self portraits and at a reasonable estimate Dunlop may well have painted 150 self portraits or more. In a good number of those he is depicted wearing a hat or other headgear. The photographs researched by Kieran Owens and Elin Jones also provide convincing evidence that Dunlop is the man in the painting owned by the National Museum of Wales. It is recommended that this discussion be concluded on that basis and that with the agreement of course of the collection, the title of the work be amended to 'Portrait of the Artist, Bust Length' or if more detail is required 'Portrait of the Artist, wearing a White Shirt and a Hat'.

Title
Portrait of the Artist, Bust-Length