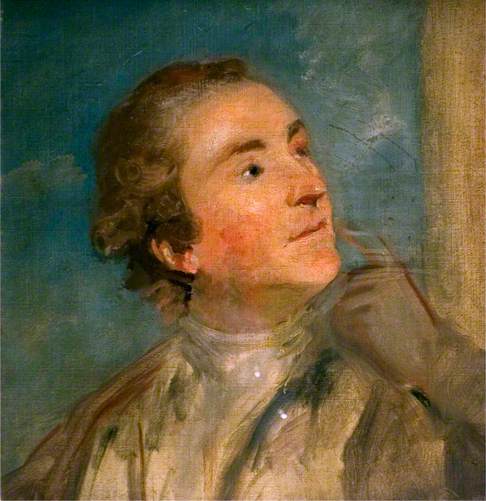 The technique resembles many unfinished works by Reynolds. I think it looks like a study not of William Chambers, but William Hamilton. Perhaps for his portrait of 1777, or I think more probably for the group portrait of The Society of Dilettanti painted 1777–1779.

If that's a study of Sir William Hamilton, then the fist must belong to George Romney. I never thought of Joshua Reynolds having a sense of humor. Plus its very loose, like a Romney painting. Might have been right after Sir William cut off his access to Lady Hamilton's services as a model.

The hand with pointing index finger is seemingly that of Richard Thompson who stands behind the seated Sir William Hamilton in the Dilettanti group portrait, although it is in a lower position in this sketch. Yes, indeed, the V&A canvas corresponds closely with the two Reynolds paintings mentioned and particularly the Dilettanti group. It could well be a study for the latter, but I think we would need an authoritative view from the authors of the Reynolds catalogue raisonne, David Mannings and Martin Postle — whom I shall alert to this discussion.

This painting is included in the catalogue of the Rev. Alexander Dyce's collection at the South Kensington Museum (now V&A) published in 1874 as showing William Chambers by an unknown artist, so the identification is one of long standing. The work is not included in Mannings and Postle's catalogue raisonne of Reynolds, although a query addressed to one or both of the authors could shed more light on the matter.

This is the known portrait By Reynolds. https://www.royalacademy.org.uk/art-artists/work-of-art/portrait-of-sir-william-chambers-r-a-1 and it's Reynolds so in fact it couldn't be anymore perfect. Yes our painting's subject could be Chambers. As for the Painter, sorry I don't think it's Reynolds. It is much to loose. He didn't paint that way. But Let's say he did, just this once. To what end. So he could then change the whole thing in the finished painting. As for the hand, all 4 fingers are made into the fist, the ghost appendage is in fact a thumb that the artist seems to be working out the anatomy and the position of.

Did a little more research. Chambers seems to have worked with everyone. He actually brought Cipriani from Rome to London. https://www.royalacademy.org.uk/art-artists/name/giovanni-battista-cipriani-ra John Francis Rigaud was another member of that group and Painted Reynolds, Chambers and Wilton together. https://www.npg.org.uk/collections/search/portrait/mw01195/Sir-William-Chambers-Joseph-Wilton-Sir-Joshua-Reynolds?search=sa&LinkID=mp07476&role=art&rNo=1 as well as https://www.npg.org.uk/collections/search/portrait/mw00373/Agostino-Carlini-Francesco-Bartolozzi-Giovanni-Battista-Cipriani?LinkID=mp07476&role=art&rNo=0 If that's Chamber then any one of these Painters could have done the sketch. But I have been unable to find a corresponding finished painting.

I have contacted Martin Postle to see if he thinks it might be by Reynolds.

Clearly this portrait is not by Reynolds. Nor Romney. Gilbert Stuart is a bit closer but....

Unlikely to depict Chambers, whose face was fuller by this date (c.1780).

Martin Postle has commented by email:

"It is clearly not by Reynolds, and is certainly not a portrait of William Chambers. Rather, it would appear - as suggested - to be based upon the portrait of William Hamilton, quite possibly from the Dilettanti picture now hanging at Brooks’s - rather than the NPG full-length portrait, as witnessed by the presence of the sketched in hand to the right of the sitter’s face, which apparently belonged to someone else."

Based on this and other comments including Jacob's, I think we can safely say that this is a portrait by an unknown artist of William Hamilton based on Reynolds' Dilettanti Society Group.

I hesitate to say it, but I remember seeing this picture once at Osterley Park, and thinking it wasn't too bad. Yes, a portrait of Hamilton. But let's wrap it up as Circle of Reynolds.