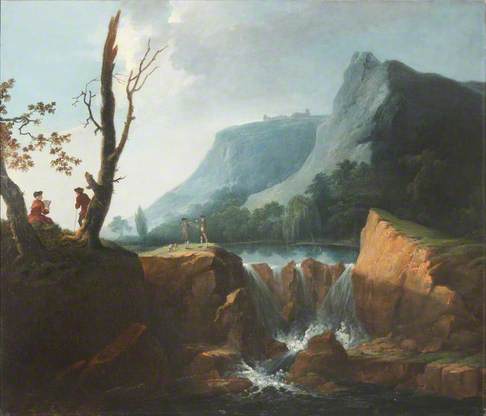 The castle on the far hill may be identifiable. Could this be No. 366 ‘A View of the Waterfall of Llangollen and the Mountain Called Moel-y-Bache’, one of the two paintings which the artist exhibited at the Royal Academy in 1773? A painting of similar size and style, ‘Landscape with a Fishing Party by a Waterfall’, is in the Ashmolean Museum of Art and Archaeology. No. 365 at the same exhibition was ‘A View of Llam Leids on Dee, a Mile beyond Llangollen, North Wales’. Waterfalls were Mullins’ exhibits No. 134 in 1771 and No. 162 in 1772 as well.

The hilltop castle could be the impressive ruined Castell Dinas Bran of which there are many photographs on https://bit.ly/2DDr9WI

The ruined castle on the far hill looks like Castell Dinas Bran. But I think that you may have already worked this out. Given the likely scale, is it not possible to consider modern topography even from an OS map to identify a waterfall? The River Dee has changed much since 1773 with the construction of the canal, and the most noted waterfall appears to be the Horseshoe Falls. This is more of a weir designed by Thomas Telford to draw water into the canal from the River Dee. Artistic licence might mean that Pistyll Rhaeadr, one of the Seven Wonders of Wales is depicted. The latter falls are located not too far away from the RiverDee. But I would conclude that this is an outside guess.

Hackney Museum's late 18th century view of the Pistyll Rhaeadr described there as 'A Rocky landscape with a waterfall and an artist seated in the foreground' shows just how impressive those falls are compared with this waterfall. That painting is attributed to Jacob More. David Solkin has suggested that it may be by John Inigo Richards . Another possibility is that it is by Michael Angelo Rooker.
Although there has been quite a bit on that work under 'proposed discussions', it has not yet been accepted for open discussion

Rheidol Falls is a possible candidate, with some romantic interpretation of the background.

Martin, thanks for drawing my attention to 'A Rocky landscape with a waterfall and an artist seated in the foreground'. I'll follow this up with the collection.

Contrary to the suggestions already made, there is not much about the topographical profile of this scene that bears any resemblance to the conical hill upon which sits the castle of Dinas Bran, nor to the very widely represented architectural depiction of the castle itself. It certainly bears no comparison to other 18th century paintings and engravings of the site.

A Google Images search for "Dinas Bran" offers a multitude of different images, both contemporary and modern, from a multitude of positions, none of which look like the scene presented in this painting.

If this was the work shown at the RA in 1773 as ‘A view of the waterfall of Llangollen and the mountain called Moel-y-Bache’ and as exhibit number number 366, then it is not this discussion's painting, especially as, apart from the dog, there are no apparent animals in the painting, as neither are there shepherds and shepherdesses.

Further to Hackney Museum's late-eighteenth-century view of the Pistyll Rhaeadr, described there as 'A Rocky landscape with a waterfall and an artist seated in the foreground', the collection is in the process of appointing a member of staff who will be our new Art Detective contact, so we should be able to open that discussion in a couple of months. They need to look at the painting first and there is limited access.

Along the river or lake side immediately behind the waterfall is what appears to be a Weeping Willow. Research suggests that Weeping Willows were all grown from cuttings of a single tree first grown in Twickenham in England in the 1740's - https://stmargarets.london/archives/2010/08/the_weeping_willow_tree.html and also on Wikipedia.
If that is the case the trees on the edge of the water are more reprentative of a parkland or garden setting and not a wild landscape in Wales.

It is an intriguing possibility that this painting might show a Weeping Willow tree that, if this is one of Mullins' Welsh works, could be thirty years or less in age. However, there is also the possibility that it is a Weeping Birch (Betula pendular...), a tree native to England and one that was described in 'The Journeys of Sir Richard Colt Hoare through Wales and England, 1793–1810', and one that was depicted in 1812 in John Laporte's engraving of 'Weeping Birch, in the Vale of Llangollen', a copy of which is in the National Library of Wales.

See https://bit.ly/2C8TQZk for a description of the Birch tree.

Thank you very much to Elin Jones for this post, attached as a Word document with accompanying images. Elin, whose first language is Welsh, suggests that the names 'Llam Leids' and 'Moel-y-bache' may be inaccurate, which is why they cannot be found in regular map searches. She suggests that both can be better placed geographically with some understanding of the culture and the language.

There is some misunderstanding about British birches here. The ordinary native silver birch (Betula pendula) has somewhat pendulous foliage (hence its latin name), though this is more noticeable in older, taller trees, especially when grown in isolation - it naturally occurs in groups or entire woods (unlike here). There are selected forms (notably 'Youngii') with a more pronounced weeping habit, but the shape is very different to the tree in our painting. In fact the outline of ours is not really right for any silver birch, and the bark is too dark; it would also not grow naturally next to water, and probably wouldn't survive if planted there. There is another native species, Betula pubescens, that tolerates wetter soil, but it is far less pendulous and again the bark is much paler.

There is little doubt in my mind that a young weeping willow is intended here. By the 1760s it was well-known, oft written about, and I think quite widely planted; it's often associated with melancholy and mourning, and the waterside position is typical. I completely agree with John that the nearer part of the landscape looks man-made, not wild. And the fairly modest waterfall seems unlikely to be one of consequence or note - in fact it, too, could be man-made, and essentially the outfall from what looks like a small lake created by damming a stream.

Of course the view may not be real at all; but if it is, then perhaps we should be looking for a romantic landscape garden created to take advantage of the view of the picturesque ruin on the craggy hills behind.

I think we can discount this being intended to depict Castell Dinas Bran. The castle is on a distinctly conical hill with a small plateau at the summit. It is depicted fairly accurately in Richard Wilson's roughly contemporary painting of 17770-71 at Yale: https://interactive.britishart.yale.edu/wilson-in-wales/104/dinas-bran-from-llangollen

I agee with Osmund that this is probably unlikely to be a real view, even if combining sketches or elements of other views of Welsh scenery - the waterfall for example is a standardised motif, see a much later Snowdonian version https://fineartamerica.com/featured/a-glen-near-moel-siabod-william-henry.html

I have some sympathy with John Curr's suggestion that there is something of the landscape garden in the trees on the oher side of the river/lake. To me, this feature supports the essentially artificlal nature of the composition.

It may therefore be difficult to identify the painting with any particular exhibited work of Mullins', at least without documentary evidence.

Title
Mountainous River Landscape with Elegant Figures by a Waterfall